5 invaluable tips on how to resist from a first-time activist. 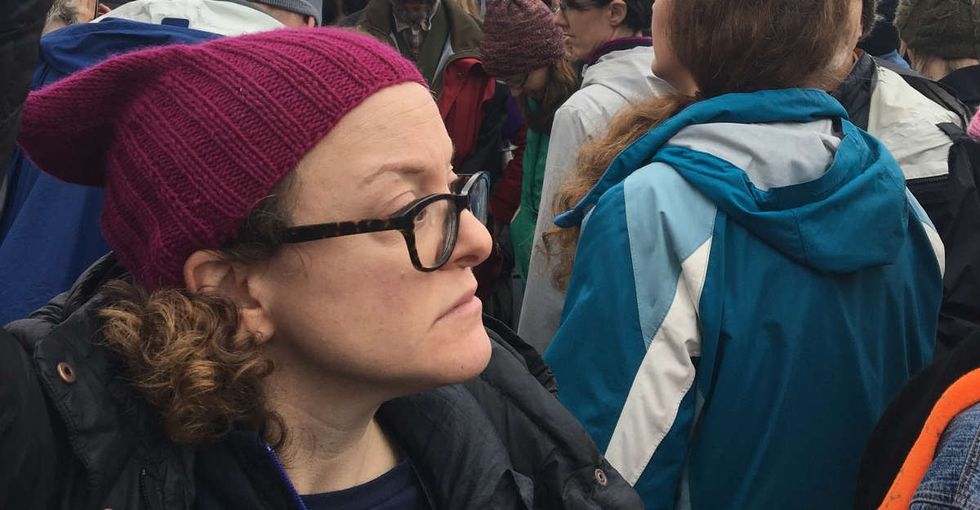 Lisa Raymond-Tolan spent much of Election Night, and the week that followed, frozen.

Still reeling from her election-induced catatonia, Raymond-Tolan, an occupational therapist from Brooklyn, began noticing posts from friends on Facebook urging people to call their local elected officials. There were Trump's proposed appointments to oppose, the Electoral College to lobby, investigations into Russian election interference to demand. It was overwhelming at first, and scary, but she willed herself to pick up the phone.

"I was so nervous. My heart was pounding. I have real phone anxiety. But I had to call them and complain about X, Y, and Z. And so I started doing it," Raymond-Tolan says.

The next step was a meeting at a local synagogue, where she joined a working group. That working group eventually became Indivisible Brooklyn, a committee of about a dozen local activists, which Raymond-Tolan helps coordinate and whose Twitter feed she runs.

Like many Americans, Raymond-Tolan had engaged in precisely zero kinds of activism before Nov. 8, 2016.

Since then, she's been placing calls to elected officials around the clock, juggling a now-busy phone and organizing schedule with a full-time job and her role as a parent of two boys. As a first-time activist, she understands the fear — and inertia — of getting started.

"I was deeply apathetic. I’m only one person, and all these other people are doing these things, so I don’t need to. I was that person just a few months ago, so I definitely understand it," she says.

For the many Americans wondering what to do next, Raymond-Tolan's advice — from a fellow novice who's taken the leap — is an invaluable guide.

Here's what she suggests for anyone looking to make their voice heard, but who isn't quite sure where to start.

1. Remember: You're not responsible for changing everything overnight immediately on your own, so just focus on what you can do.

The key to surmounting the notion that there's just too much to do and overcome? She suggests picking one activity, even if it's small, and adding it to your daily routine.

2. Start with the thing you care most about.

Raymond-Tolan's group bases much of its strategy on the Indivisible Guide, a document on how to apply Tea Party tactics to anti-Trump resistance, compiled by four former congressional staffers. Among it's main conclusions? Resistance begins at home.

"You want to be focusing on your local representatives," she says. Out-of-state elected officials don't care much about people who won't affect their re-election.

3. When you get your elected representatives on the phone, remember that you are the one holding the cards.

"These people work for us, so if you think of yourself as the boss, you can call them up and tell them what you think and what you expect from them," she says.

For those who are still intimidated to dial a U.S. government office, realizing that you'll likely be speaking to a 22-year-old intern certainly doesn't hurt either.

"You can call Paul Ryan! You can do that and tell him what you think. Does it matter because you’re not his constituent? Probably not. Does it feel good? Absolutely."

Early on, Raymond-Tolan called the office of outgoing Wyoming Rep. Cynthia Lummis — a Republican former member of the House Committee on Oversight and Government Reform — to demand investigation into then-President-elect Trump's conflicts of interest. She expected to reach an intern, only to wind up on the phone with the congresswoman's chief of staff. They wound up speaking for 45 minutes — debating their political philosophies and getting to know one another personally.

"I still email with him from time to time," she says.

5. But, seriously, do the work — because it's not that hard.

"My grandfather, he was always really big on voting," Raymond-Tolan recalls. "He always said, 'If you don’t vote, you can’t bitch.' So if you want to complain about something, but you didn’t make any phone calls, you really shouldn’t complain."

For three months now, she's been heeding his advice. With a little nudge, she thinks many more — including you — can too.

"If I can inspire one person to do one thing, that feels like a win to me," she says. "So let’s make some phone calls."