25 years ago, this dino was discovered. $8.4 million later, it was ready for the world to see.

Reflecting on the story of how Sue found a way home, a quarter-century after discovery. 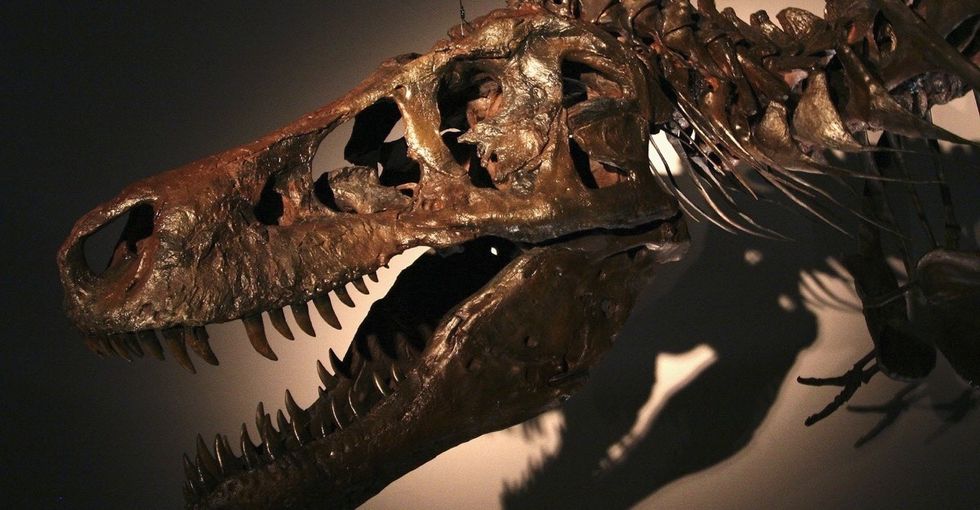 On August 12, 1990, a fossil hunter named Susan Hendrickson spotted what appeared to be bones in the side of a South Dakota cliff.

While working at the Black Hills Institute, a South Dakota-based company that excavates fossils and minerals, Hendrickson made the find of a lifetime: a 65-million-year-old Tyrannosaurus rex in excellent condition, more than 90% complete.

In honor of Hendrickson, the dinosaur was named Sue.

Hendrickson attends the unveiling of Sue at the dinosaur's eventual permanent home in Chicago in 2000. Photo by John Zich/AFP/Getty Images.

But it turned out finding the skeleton was only part of the battle. Then came the legal fight.

Black Hills Institute's president, Peter Larson, originally planned to keep Sue as an exhibit at the institute's private museum. Larson paid Maurice Williams, who owned the land on which the fossil was buried, $5,000 for the right to excavate; his team extracted the dinosaur over the next few weeks.

Within two years, though, the FBI seized Sue from the museum, alleging that the dinosaur was "stolen property." The FBI claimed the land on which the fossil was found belonged to the Bureau of Indian Affairs and that Williams didn't technically have the power to sell excavation rights. In 1993, a judge ruled that Williams was Sue's rightful owner.

Sue was eventually put up for private sale at Sotheby's auction house.

In 1997, Williams was exploring the idea of selling his prized fossil and reached out to Sotheby's. Paleontologists grew concerned that should the dinosaur be put up for auction, it was possible that a private buyer would swoop in, and Sue would never be seen by the public again.

With that in mind, Chicago's Field Museum of Natural History launched a massive fundraising operation in hopes of winning the auction and keeping Sue accessible to the public. On Oct. 4, 1997, Sue was put up for auction, and the museum's plan was put to the test.

With the help of corporate sponsors like Disney, McDonald's, and the California State University system, Chicago's Field Museum claimed victory after six and a half minutes of bids.

On May 17, 2000, after workers spent more than 30,000 hours on preparing and assembling Sue's more than 250 bones and teeth, the museum unveiled a newly restored Sue to the public.

The story of Sue the T. rex is a testament to the power and importance of education.

When you look at the amount of time, energy, and money the people most passionate about Sue invested in making sure the public could see it, it's hard not to appreciate the awesomeness of the world as it was millions of years ago; it's hard not to ask yourself what more is out there for us to find.

If just 25 years ago, a nearly complete 42-foot long, 12-foot high T. rex can turn up in the side of a cliff, there has to be more we can learn. Sue the T. rex is an inspiration.