25 of the best signs from Families Belong Together demonstrations around the country.

Thousands of protesters marched together to support reuniting families torn apart at the U.S.-Mexico border. 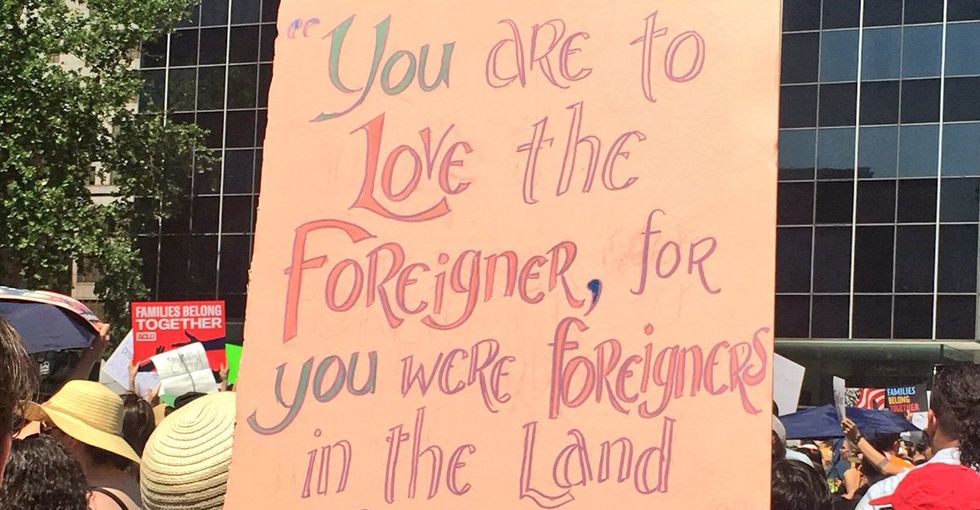 Cities all over the country were filled with engaged citizens on Saturday, June 30, 2018, as thousands of protesters marched together to support reuniting families torn apart at the U.S.-Mexico border.

In May and June, thousands of families were split apart after the Trump administration issued a zero-tolerance immigration policy that resulted in several thousand children being taken away from their parents and held in detention centers. Families Belong Together, an organization resisting the Trump administration's zero-tolerance immigration policy, organized a march on Washington to protest the troubling policies. Citizens around the country marched in solidarity in their communities to drive home one simple message: #FamiliesBelongTogether.

People got creative with how they shared their messages.

This will never stop being my favorite sign. #FamiliesBelongTogetherMarch https://t.co/PSH562zcRk
— ChuckModi (@ChuckModi)1530374379.0

If you were looking for a sign from God, here's one. #FamiliesBelongTogetherMarch https://t.co/LZrKLZKOXk
— Jennifer Wright (@Jennifer Wright)1530373378.0

Even some kiddos got involved.

We Care 🇺🇸 don’t get it twisted, we believe there should be policies, & implemented measures for securing our country. I believe in taking care of the vets. What we don’t believe— ripping families apart as a bargaining chip!! We don’t believe we are superior because we were born on the right side of an imaginary line, we are raising the future, make sure they know what side of history you’re on! I don’t identify as anything other than compassionate & if believing everyone has the right to safety is liberal- then call it what you’d like. I believe we are all one 🌎 #marchforjustice #changemakers #family #reunitefamilies #wecare ✊🏼#familiesbelongtogether #humanity #humanrights #humanrace #onelove

At the #FamiliesBelongTogetherMarch in DC, one 4yo protester holds a sign she painted herself (with a little help f… https://t.co/t4BNak6leI
— Hannah Natanson (@Hannah Natanson)1530369163.0

And for many, it was a group affair.

Take a stand with pride #FamiliesBelongTogether

People are raising their voices loud and clear. Now, it's time the government listened.

No matter what side of the political aisle you fall on, families always have and always will belong together. If you want to continue helping Families Belong Together and other organizations committed to reuniting migrant families, learn more about how you can help here.