2 black men were unjustly handcuffed at Starbucks. Now, they're meeting with the CEO. 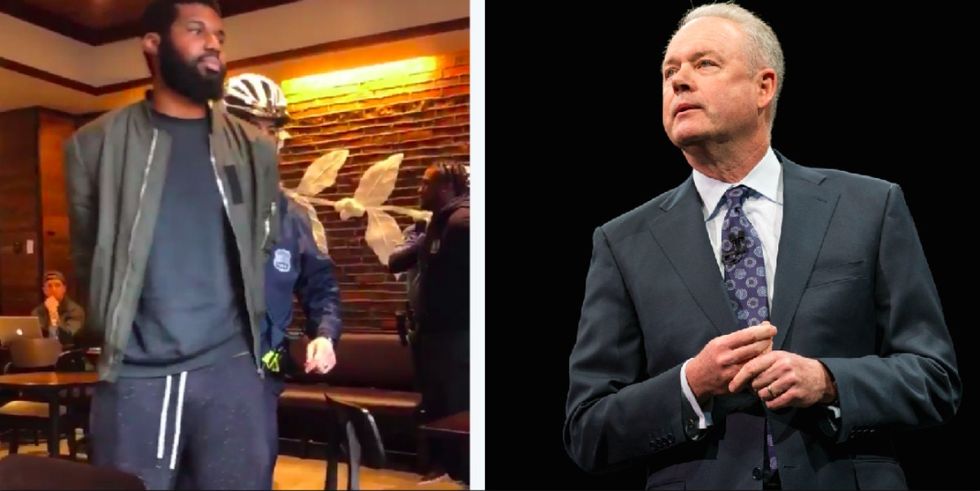 They were just waiting to start a business meeting. Now their story is fueling a movement that could permanently change corporate culture.

Two unnamed black men were filmed being led out of a Starbucks location by six Philadelphia police officers on April 12. At the time of this post, the video had already been viewed more than 10 million times.

@Starbucks The police were called because these men hadn’t ordered anything. They were waiting for a friend to show… https://t.co/gQ6HFw3fYZ
— Melissa DePino (@Melissa DePino)1523567534.0

The city's police commissioner initially defended the arrest, which reportedly came after a local Starbucks manager called in a complaint. Meanwhile, outrage over the incident grew — and so did pressure on Starbucks to address what increasingly is being labeled a case of racial bias.

Philadelphia Mayor Jim Kenney chimed in, saying, "I am heartbroken to see Philadelphia in the headlines for an incident that — at least based on what we know at this point — appears to exemplify what racial discrimination looks like in 2018."

He apologized and offered to meet with the men directly to find a solution.

It turns out, Johnson's most recent apology was every bit as direct and specific as it should have been — and other public figures should take note.

"The circumstances surrounding the incident and the outcome in our store on Thursday were reprehensible. They were wrong," Johnson said. "And for that I personally apologize to the two gentlemen that were visiting our store."

"It's my responsibility to understand what happened and what led to that and to ensure that we fix it," he said.

Johnson added that Starbucks would update its training practices at its more than 28,000 locations, including what he described as "unconscious bias" in terms of how employees and managers treat people of different races and backgrounds. He reiterated that the company has an explicit policy against racial profiling.

"What happened to those two gentlemen was wrong," Johnson said. "We will hold ourselves accountable."

A "good apology" alone doesn't fix the problem, but it helps. Even news anchors who interviewed Johnson agreed, with George Stephanopoulos commenting, "This guy did not hedge. He took full responsibility."

"We rarely see that from a CEO," co-anchor Robin Roberts added. "He wasn't mincing words at all."

An injustice was committed, and that can't be forgotten. But Johnson's offer to meet with the two men is a step forward.

He said he'd like to meet face-to-face with the two men so that he can apologize directly.

"I'd like to invite them to join me in finding a constructive way to resolve this issue," he said.

It still remains to be seen exactly how this situation resolves (and a subsequent incident in Los Angeles that apparently took place on the same day as Johnson's interview doesn't bode well). After all, the two men in question still haven't used their opportunity to have their voices heard.

Still, it's clear that there is power in people speaking out and applying pressure on business and political leaders to provide accountability and solutions when an injustice needs to be corrected.