17 photos of people who know just how high the stakes of climate change are. 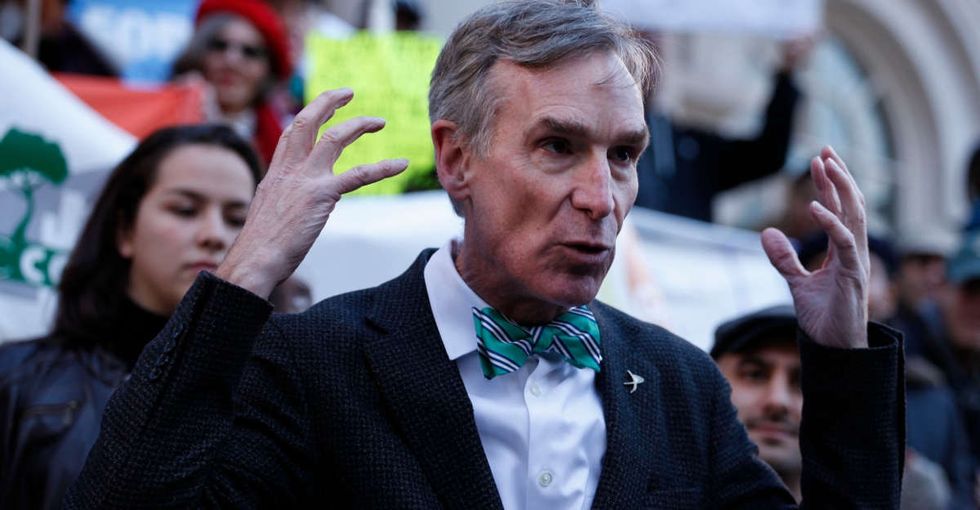 While world leaders were traveling to Paris to attempt to finally agree on what to do about climate change, people all over the world got together to hold their feet to the fire.

The ostensible goal of the COP21 conference in France is to produce a legally binding agreement that will help reduce emissions and slow down global warming. But climate change is already here, and the usual conference scenario — lots of important people talking a lot while getting little done — ain't gonna cut it anymore.

That's why this weekend, hundreds of thousands of people around the world gathered to send a message to their leaders:

A protestor holds up a heart-shaped sign that asks world leaders, "Are you ready for extinction?"

Everyone's favorite Science Guy, the one and only Bill Nye joined the crowd.

"The climate is changing. It's our fault, and we have to get to work on this now," Nye reportedly said at the rally, according to the New York Daily News. When even the best-case scenarios include scary outcomes like more flooding, bigger and badder droughts, and massive crop die-offs, it's hard to disagree with the (science) guy.

Hulk would very much like to smash climate change.

Though Norwegian glaciers bravely held on until the late-1990s, they're now retreating just like in most of the rest of the world.

Unless a comprehensive, binding climate agreement with teeth gets signed in Paris this year, the glaciers of Norway will likely be forever remembered as having peaked right around the time Smash Mouth did.

Her sign reads: "People in charge: This is my Earth, and it's also yours and your children's. Don't destroy it."

The song is still untitled as of publication, but might I suggest, "Wake Up and Do Something, You Dolts?"

Has a nice ring to it, is all I'm saying.

A Dutch man with a killer beard carries a sign that reads, "This road is a dead end" — and not only because it appears he's about to smash into a giant scale replica of the Eiffel Tower.

He's referring to this road. The one the Earth appears to be on. Turn around much, Team Paris?

Should the worst-case climate scenario come to pass (a temperature increase in excess of two degrees Celsius, a world-altering mega-sea level rise of 20 feet or more, and millions of displaced people around the globe) figuring out how to fit bugs with World War I-era gas masks will be the least of our problems.

This mask: precisely 150% less scary than the effects of a sea level rise that conforms to even the most conservative estimates.

A few days before the climate talks were set to begin, folks all across France got together to protest a ban on large gatherings that was imposed after the Paris attacks.

Though some of the marches devolved into clashes with police, this one manifested as a nice, chill circle.

In South Africa, thousands marched to draw attention to the connection between climate change and worsening poverty.

According to a World Bank report, rising global temperatures could help lead 100 million more people down the path to extreme poverty, unable to afford even the most basic spooky skeleton mask.

World leaders planning to bulls*** their way through the climate meetings should think twice before messing with these women or their brighly-colored flowers.

As a result of climate change, Uruguay has been contending with increased rainfall and more intense storms.

Thankfully, these protestors chose one of the decreasing number of bright, near-perfect sunny days to send a message over to France.

A protester on Canada's Parliament Hill, modeling what many in coastal cities around the world will be forced to wear just to say afloat if too many glaciers melt.

According to a 2014 study published in Nature Climate Change, climate change could reduce the Antarctic penguin population by up to one-fifth, rendering it no longer possible to make it through "March of the Penguins," without bursting into tears for the wrong reasons instead of the right reasons.

Estimates released by the UN in 2011 clearly demonstrate that, if we really wanted to, we could be using renewable energy to meet 80% of the world's power needs within the next 40 years — and that still wouldn't be enough for these Spanish marchers demanding 100% renewable energy with their delightful yellow sun placards.

If arctic sea ice continues to melt at current rates — up to 9% per decade — polar bears may be forced to move to major cities around the globe and march defiantly in parades. Which is why the world needs to act — now.

'Cause let's be honest, leaving aside all the grave consequences drastic climate change might wreak, that would be super weird.