15 photos that show how gender isn't the most important thing about us.

There's a lot of talk about gender lately, which is great! There should be. Still, I think people forget sometimes that though we may be curious about gender, there is A LOT more to people than the labels we place on them and/or the labels they feel comfortable identifying with. Here's a photo series that challenges our stereotypes and makes us go beyond those labels and see people for who they really are. 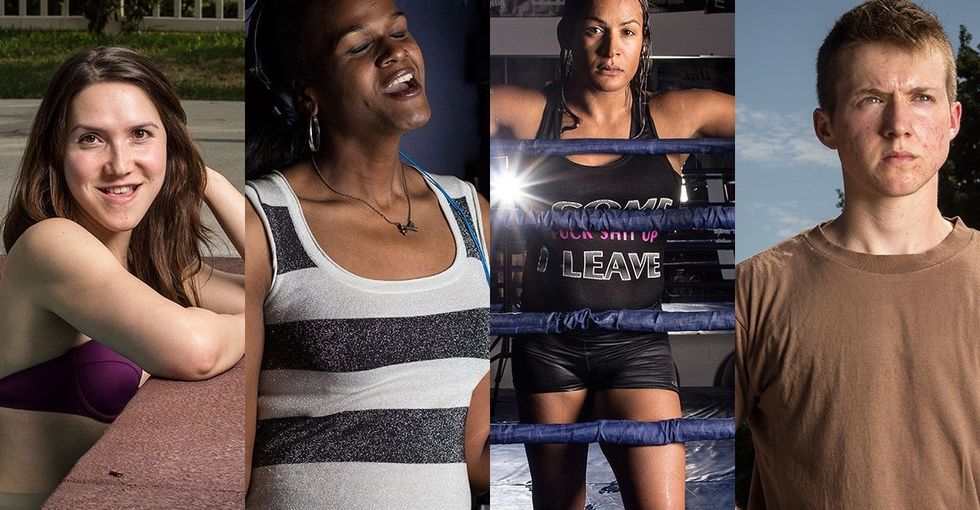 Rhys Harper created this project because he felt like the "media and society in general is starting to discuss trans issues more, and there is more awareness, but so often, the focus of discussion is about bodies and what is underneath our clothes, instead of who we are and what we have to offer the world."

Guess what? We're all on the gender spectrum. Gender is a made-up thing that we all should get to define for ourselves. I don't fit in your box, and you don't fit in mine. That's one of the awesome things about being a human.

Take a look at these striking photos Rhys took and captioned, and consider this —

If you were being photographed, what would you want to showcase about yourself?

"Aiden is a taxidermist and Native American two-spirit tribal artist who lives in Boise, ID. He also loves cars, specifically, his Gambit-themed Mustang that he has been customizing for the past few years. He says one of the most defining moments in his life has been the death of his soul mate, whom he lost to suicide – he gave him the courage to live life and find the happiness everyone deserves. He also loves things that are imperfectly perfect. He is pictured here in his Native regalia, which he wears for special occasions and pow wow dances." (Photographed in Salt Lake City, Utah)

"Arin is an Oklahoma teen who just published his first novel, Some Assembly Required. He is currently attending college in Oklahoma and plans to have a career in the outdoors." (Photographed in Catoosa, Oklahoma)

"Chris is a country boy living in Oklahoma. He works as an EMT dispatcher, but when he isn't working he is riding four wheelers, hunting, and getting muddy out in the backwoods of Oklahoma. He also is passionate about gun safety and wants to get his gunsmith license in the future." (Photographed in Leflore, Oklahoma)

"Eri grew up in the pool – she was on the swim team, and spent much of her life swimming in her parent's pool, where I photographed her. She was recently the subject of the documentary "TransMormon," featured on Upworthy, and works for a holistic health company." (Photographed in Orem, Utah)

"Sister Estelle is an Episcopal nun who is currently renovating an old Victorian home as a safe home for people in transition." (Photographed in Indianapolis, Indiana)

"Fallon is a professional mixed martial artist (MMA) fighter from the Chicago area. She has also been involved with national trans advocacy efforts and regularly writes for national LGBT media." (Photographed in East Schaumburg, Illinois)

"Kaleb is a professional cat rescuer in North Carolina. He manages a shelter in the heart of the Great Smoky Mountains, where he takes care of more than 70 cats and kittens. He lives in a small apartment on the shelter property, and works tirelessly to take care of the shelter cats while rescuing cats from the local animal shelter. In his limited spare time, he likes dancing to Olivia Newton John in his apartment."(Photographed in Cullowhee, North Carolina)

"Kallie is a veteran, engineer, and aspiring professional cyclist. She is passionate about trans military rights, and says that she would go back to serving her country in a heartbeat if the military were to change its policies regarding trans people."(Photographed in Longmont, Colorado)

"Lana is a third generation firefighter who is in her 34th year of service. She was promoted to Lieutenant in 1992, and to Captain in 2000. Recently, she started volunteering as a mentor for a local court program that helps women who are survivors of human trafficking and are in the court system move forward with their lives in a positive way. She also serves on the national board of directors for GLAAD." (Photographed in Columbus, Ohio)

"Landon is a former US Sailor and trans military activist. His story made headlines when he was discharged from the military for being trans after being up from a promotion while he was deployed. Since returning from deployment and leaving the military, he has been an outspoken activist for changing the military's policies and allowing for open trans service. He also loves animals and has an adorable dog named Maizie." (Photographed in Washington, D.C.)

"Mattee is a Native woman living who is doing HIV/AIDS work for a Native nonprofit health center in Albuquerque. She identifies first and foremost as dine', which is a Navajo word that means 'of the people.'"(Photographed in Albuquerque, New Mexico)

"Natalie is a wildlife biologist who has recently been studying mink populations along the Sheboygan river. She is also a bow hunter, and does falconry. She is pictured here with her bird Bam Bam. In addition to her love for all things outdoor, she volunteers her time with several national organizations, including an organization that helps survivors of domestic violence." (Photographed in Random Lake, Wisconsin)

"Tracy is a transgender-expressive novelist from Dallas/Waxahachie, Texas. She is also a blogger, reviewer, former actor & artist. She writes true-to-life stories, novels, & screenplays with real characters set in realistic situations. In terms of genre, she writes interracial/multicultural romance and drama with an LGBT twist. Her writing portfolio includes four novels, two original screenplay projects, and a collection of short stories." (Photographed in Oklahoma City, Oklahoma)

"Zoe is an amazing DJ, photographer, and activist. She spins every Saturday night at a local Cleveland nightclub, and is also involved with local activist efforts to assist trans women of color in the area, and also nationwide." (Photographed in Cleveland, Ohio)