You've seen these works of art. But you've probably never seen them gluten-free. Feast your eyes.

Where'd all the bread go? 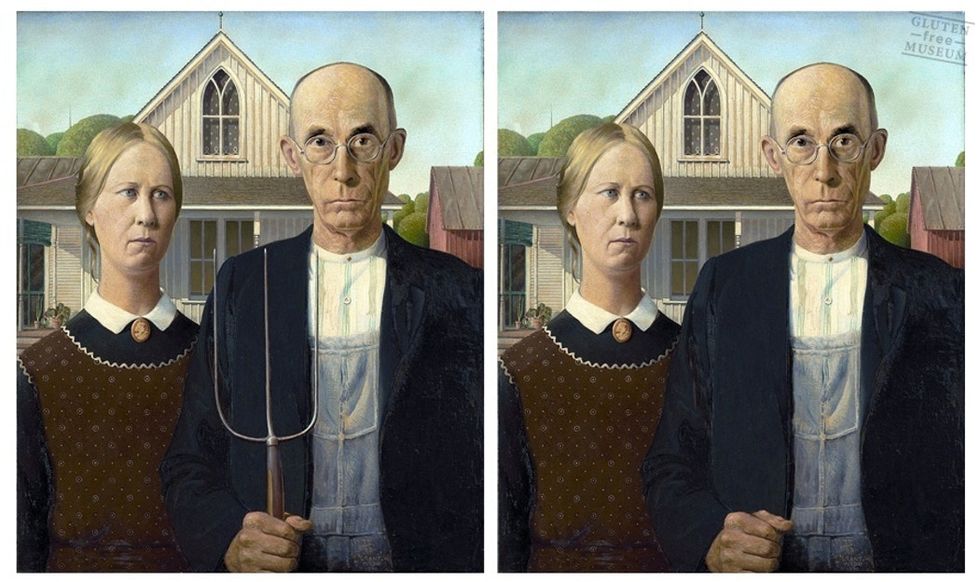 I completely understand why. It's delicious. It smells amazing — especially when it's freshly baked or toasted. And breads can be called upon to heighten any meal or dessert.

According to the History Channel, people have been making bread for 30,000 years. In an interview with BBC, Coulet notes how integral the starchy staple has been for humanity: "Our civilization is based on wheat. There is a link between culture and agriculture."

In recent years, bread has come under attack, so Coulet decided to make it the subject of an art series.

The Gluten Free Museum is a Tumblr where he posts images of classic and popular art, iconic movie scenes, and TV shows — but with all bread and bread references removed.

Here's a gluten-free look at some of Coulet's work:

"Still life with bread and eggs" by Paul Cezanne

"The Milkmaid" by Johannes Vermeer

The spaghetti scene from Walt Disney's "Lady and the Tramp"

What's the beef with bread?

Years of dietary research has told us that eating less bread — like our ancestors from the way, way back — could help combat obesity and heart disease, which has paved the way for all sorts of fad diets that demonize grain-based foods.

It may not be that simple, but for now it's all we know, says health and science writer Melinda Wenner Moyer:

"We can't say, based on today's evidence, that carbs are the root cause of all our chronic ailments, but scientific evidence suggests that we might stay healthier if we take flour and added sugar off our plates. Still, human nature is a moving target. Cookie by cookie, we might be forging humanity into new evolutionary territory, re-shaping our genes to handle our new dietary indulgences."

For some people, breads can literally be poison.

In recent years, there's been a spike in awareness around celiac disease — a negative autoimmune response to gluten — that affects roughly 1% of Americans.

Gluten are the proteins found in grains like wheat. It's what gives elasticity to dough and holds baked breads together. For people with celiac disease, gluten consumption can damage their small intestines and prevent their bodies from absorbing nutrients.

At the end of the day, Coulet wasn't trying to make a statement about our diets.

The gluten-free trend has been great for people with celiac because it's become so much easier to find safe food options. On the other hand, the gluten-free movement has also become a target of ridicule for anti-fad-dieters, some of whom deny celiac is a real disease.

To be clear, celiac is real. And it can be serious.

I had a conversation with Coulet, and he said he wasn't trying to be a critic of either side. He was mostly in it for a little photo-trickery fun:

"I just wanted to give people an opportunity to see familiar art pieces in a new light. Playing on trends was a way I could do that. I know gluten is a serious matter for some people. But for others, gluten-free is a fashion diet based on a kind of health paranoia. The Gluten Free Museum was a fun way to draw attention by casting humor on those food fears."

But props to him for creating such a teachable moment.