Would you eat this cherry? Big Agriculture says 'No, throw it away' — like 40% of all food grown.

This is disturbing on so many levels. 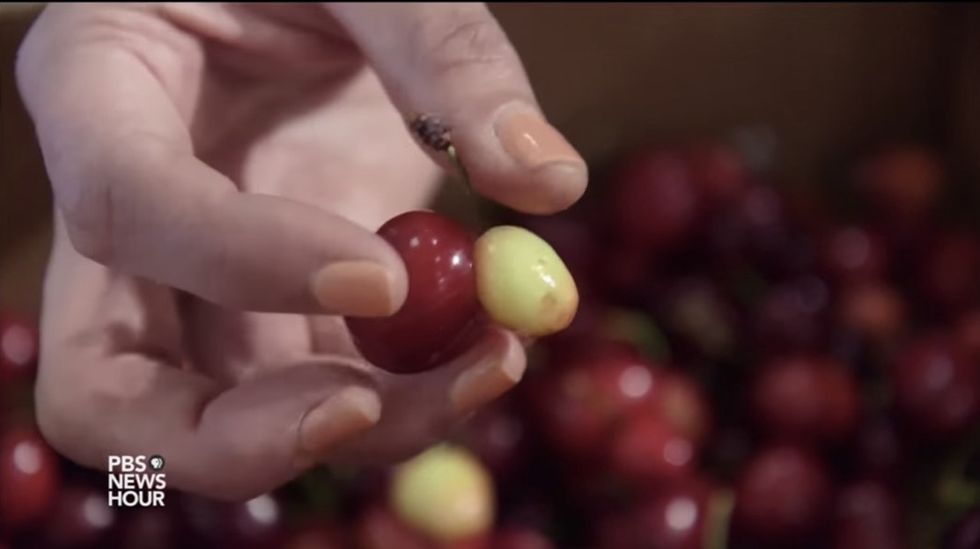 The numbers are staggering. Between consumer and farm waste, we throw away an incredible amount of food every day, all over the world...

...while many don't have enough to keep from dying of … not having food.

(Depending on whether you look at post-farmed or pre-farmed.)

For example, the average American wastes over 200 pounds of edible food per year. That's not the rotting lettuce or the apple that's turned brown, but actual edible food.

And when you add to it the vast amount of food wasted in the farming process ... wow.

As this video from "PBS NewsHour" shows, it's a serious problem.

(That thing mentioned at the end of the video, Imperfect Produce, is a really intriguing idea.)

And for an easily digestible graphic (seewhuddIdidthere?!) about food waste, check out this from Face the Facts USA. The numbers below are actually from 2010, but a quick check reveals that it's still a serious problem. Stay tuned after the graphic because there is some good news, I promise!

"What can I do? I'm just little ol' me, cooking dinner. I'm not Big Agriculture."

I refer you to a quote from Howard Zinn:

“Small acts, when multiplied by millions of people, can transform the world."
— Howard Zinn

For some things you can do at home, check out EndFoodWasteNow.org. And then, there's 29 smart and easy tips to reduce food waste. Heck, you can even recycle food waste.

If volunteering or donating is more your speed, check out FoodRescue.net, FeedingAmerica.org, and even more ideas on WastedFood.com.

Me? I'm about to see what's hiding behind the front row in my fridge, and then instead of throwing out perfectly good food, I'mma throw down with my wok. BAM!