Wildfire evacuees need fresh water, so this brewery put business on hold to give it to them.

Saskatchewan and the surrounding areas are burning. This beer maker is stepping up to help. 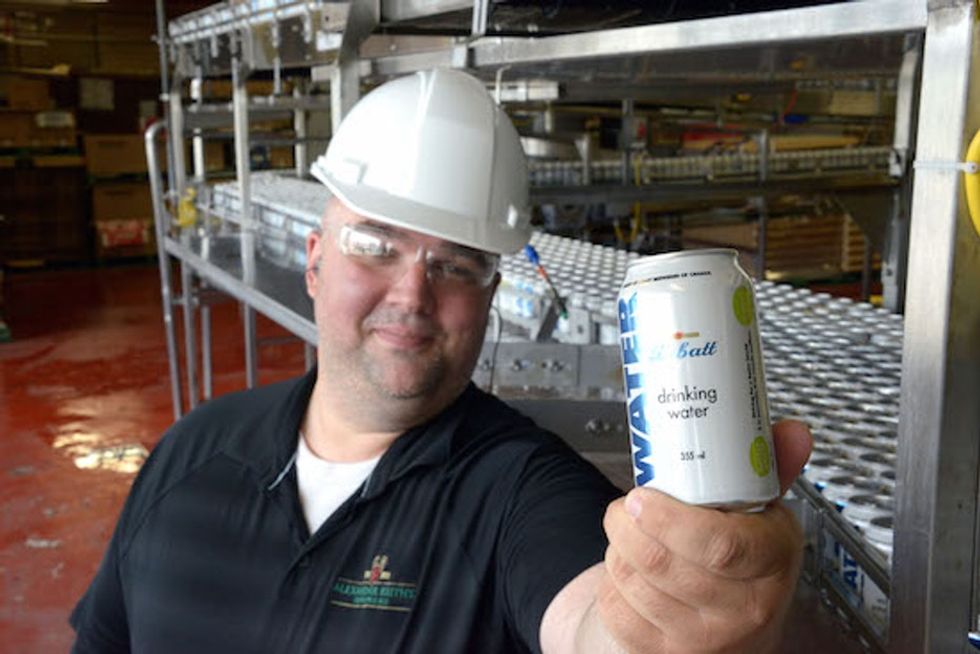 Welcome to Labatt, one of the biggest breweries in Canada.

The brewery is home to the distinctly Canadian Labatt Blue and other beers, and it just so happens to be the local arm of beer behemoth Anheuser-Busch InBev. (So if you've ever gotten drunk on Busch Light on the prairies of Saskatchewan, you can thank Labatt for hooking you up.)

But this month, they're taking all the alcohol and all the hops — all the everything, actually — out of their beer. And it's for a really good reason.

Labatt is pitching in to fight Canadian wildfires with fresh drinking water for evacuees and emergency workers.

A Labatt worker holds up a frosty can of H2O. Photo from Labatt used with permission.

Wildfires have been wreaking havoc on Saskatchewan, Alberta, and British Columbia all throughout the summer. These kinds of fires are nothing new to the region, but the number and intensity of the blazes this year is unprecedented.

In fact, there have already been more than 580 wildfires in the region this summer, compared to just 205 last summer. As of July 7, there were over 100 wildfires burning at the same time.

Not surprisingly, these blazes are having an enormous effect on nearby residents.

So far, over 50 communities have been partially or fully evacuated, leaving more than 13,000 people with nowhere to go other than crowded evacuation centers.

And in times like these, clean drinking water is often one of the hardest resources to come by. Catastrophes of this magnitude can contaminate water sources and even destroy the infrastructure that allows access to that water.

Labatt may not be able to put out the flames, but they can make sure everyone has something to drink.

And not in a drink-to-forget-the-giant-raging-wildfires sort of way. They're scaling back their regular beverage production to produce cans of fresh emergency drinking water, hoping to ship over 2,000 cases to displaced residents and firefighters during the coming weeks.

That's a lot of water cans. And Labatt is ready to make more. Photo from Labatt used with permission.

They've actually done this before — they established a disaster relief program back in late 2012 and delivered tons of fresh drinking water during severe flooding in 2013 and 2014.

Remember this image next time you're deciding what to buy at the liquor store. Photo from Labatt used with permission.

"It's about people helping people and it's a large coordinated effort for us to respond quickly," Sharon Mackay, Labatt's director of corporate affairs, told Vancity Buzz.

"Our employees take a lot of pride in being able to help out."

"It's about people helping people and it's a large coordinated effort for us to respond quickly."

Let's hope our neighbors to the north stay safe until the fires die down. If you want to help, the local Salvation Army needs donations of summer clothing, socks, and underwear. You can also give money through the Red Cross once the disaster relief efforts move into recovery mode.

Oh, and let's hope they get the beer flowing again real soon, too.