What it's like to be an Asian-American, as told through 19 viral photos.

Students at Bowdoin College were hoping to start a conversation about race on their campus with these photos. Their plan worked. 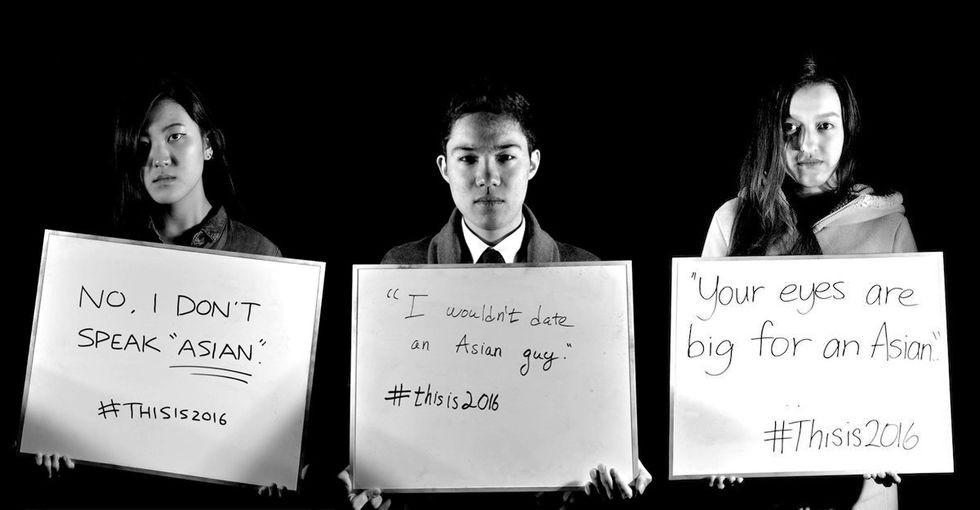 In October 2016, Asian-American New York Times editor Michael Luo posted on Twitter about being called out, on the streets of New York City, for his race.

I ran after the woman and confronted her and said I was born in this country. But I felt silly. How to prove this country is mine too?
— Michael Luo (@Michael Luo)1476034785.0

Suddenly, hundreds of Asian-American Twitter users were talking about this. What things had people said to them, about the country they were born in?

One of the most poignant responses to Luo's tweet was a viral internet photo series out of Bowdoin College.

The series was launched as part of Bowdoin’s No Hate November, a month-long program aimed at encouraging discussions about race and diversity on campus. With the photos, the students hope to show that every experience of being Asian in America looks different. They want to display the variety of experiences among participants too.

“A big takeaway from photo exhibit is this ability to have productive dialogue and have people ask themselves, ‘Why is this hurtful?’” Bowdoin’s ASA president Mitsuki Nishimoto says.

The photo series features 48 students holding signs that address common misconceptions and stereotypes about being Asian-American.

It includes students from China, South India, Pakistan, and Vietnam, among other countries. The photo series was first published to the Asian Students Association of Bowdoin’s Facebook page, and it has since received more than 85,000 shares and 3,000 individual Likes.

“I think the word 'Asian' has been used as a homogenizing term. People tend to think of only East Asians, and the rest of the Asian continent gets left out... It is important to recognize that while a lot of Asians share commonalities, we are also heterogenous,” Nishimoto says.

It also addresses jokes Asian-American students have been told about their race.

“While jokes might be told in a humorous manner and seem lighthearted, they still carry a weight. When you tell me I can use dental floss as a blindfold, you’re referencing a specific body part. No one is going to tell a non-asian person something like this,” Bowdoin’s ASA co-vice president Kevin Ma said. Even though Ma says he wasn’t personally hurt by the comment, he says other Asian Americans may feel differently if told the same.

Here are 18 more photos of students sharing their real experiences:

Overall, this photo series does more than simply display things that were said. It also redirects attention to the impact of our words.

“When people hear the word racism they obviously think negativity, they think, ‘I don’t identify with that term. I’m not racist.’ We need to redefine and rethink the word and what it really means. Though not all of the things that were said to us were intended to be hurtful, they’re still racially insensitive,” Nishimoto says.

The students hope that after viewing the photos people will be able to better empathize with the Asian-American community, keeping an open mind and standing up when microaggressions are enacted in the world around them.