We're all weeping over a sweet video of Mickey Mouse telling 2 kids they're being adopted. 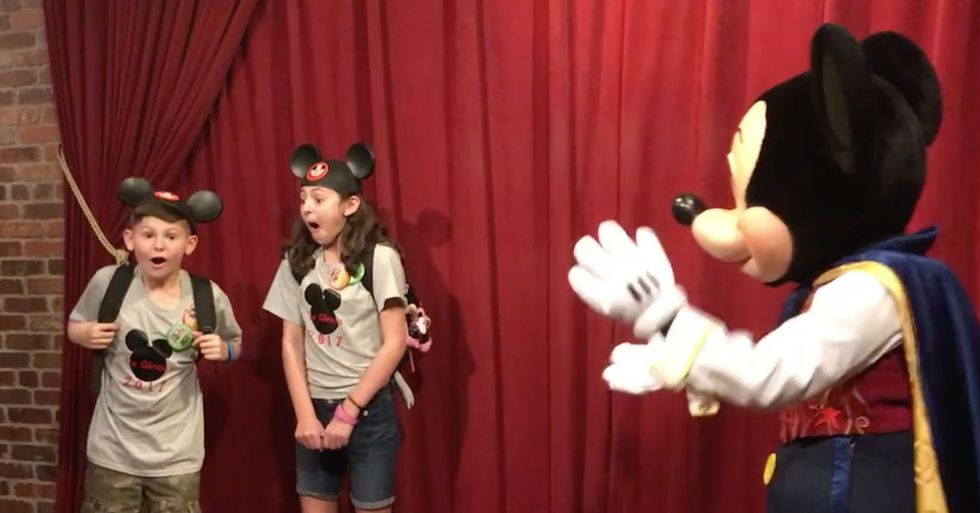 Being a foster parent is undoubtedly one of the hardest jobs on the planet.

It's also one of the most important, with some 400,000 kids currently in foster care in the United States. Children come to them from a variety of heartbreaking and stressful situations, and it's the foster parents' job to provide not only food and shelter, but love and parental guidance.

Then, if the time comes for the children to be adopted, foster parents sometimes have to let them go. Unless they decide the children's forever home should be with them.

When the foster parents of 12-year-old Janielle and 10-year-old Elijah Gilmour decided to adopt the pair, they wanted to make it a moment to remember.

They took them to Disney World, where Mickey Mouse himself offered to deliver the news.

In a moving video posted to Facebook, Courtney Gilmour (the kids' foster mom) captured the incredible moment Janielle and Elijah learned the exact day their foster parents of over three years would become a part of their permanent, forever family.

(Skip to around the 3:10 mark to get to the good stuff: Mickey directs the kids' eyes to a sign that shows them their official adoption date. Also, bring Kleenex.)

Disney offered a special meet and greet with Mickey so he could let them know their adoption date. The kids had no idea any of this was happening. They just thought they were getting their books signed. This went better than we had hoped. They were beyond shocked and we were beyond emotional. We were very lucky to have Aunt Vicki there to film it! *side note* have tissues when watching PURE DISNEY MAGIC! #adoption #Disney Tom Gilmour Vicki Marz

The kids already knew they were being adopted, but being able to put a date on it somehow made the whole thing finally feel real.

She told ABC News, "It was something they desperately wanted — closure on the adoption date," adding that the whole idea was conceived over Twitter, of all places, after the couple posted a hashtagged photo and Disney responded.

The video has since gone viral, and over 2 million people are, well, totally weeping over it.

"My heart is full of happiness and my eyes are full of tears," reads one of the top comments on Gilmour's post.

Best of luck to Elijah and Janielle as they join their new family, and congratulations to the Gilmours on an important job done well.