This grandma accidentally invited a teenager to Thanksgiving in 2016, now it's a tradition. 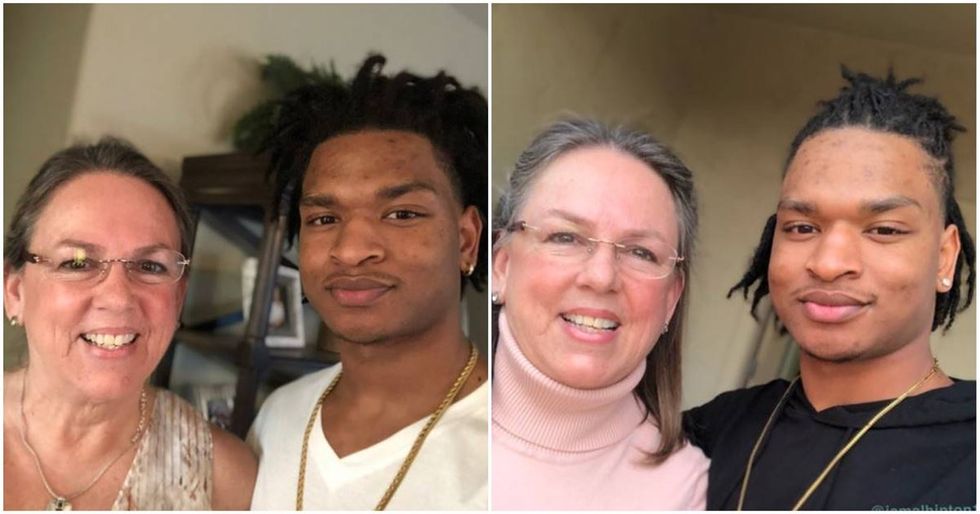 The Thanksgiving holiday means a lot of different things to people. It could be football, a celebration of chill autumn vibes, praising a deity, gluttony, family, or giving back to those who are less fortunate.

For many, it also represents people of all walks of life coming together in gratitude. Something that America needs a lot more of in these politically and racially-divided times.

Although there are many myths surrounding the first “Thanksgiving” in 1621, it’s believed that the pilgrims and the Wampanog tribe — two groups that couldn’t be more different — came together and enjoyed a feast to celebrate a bountiful harvest.

For the past three years, an unlikely guest has been coming to the Dench family Thanksgiving celebration in Arizona, Jamal Hinton.

Hinton was invited to the Dench celebration three years ago after Wanda Dench accidentally sent then 17-year-old Hinton a text meant for her grandson.

After the two realized the text was in error, Hinton jokingly texted back, “Can I still get a plate tho?” and Dench responded, “Of course you can. That’s what grandmas do.”

Hinton accepted the invite, stopped by Dench’s Thanksgiving feast and the story went viral. The idea of strangers of different races opening their doors and hearts to one another was especially powerful after the racially-charged 2016 election.

During the dinner, Dench and Hinton struck up a meaningful friendship.

“I just clicked when I met him and first talked to him,” Dench told NBC News in 2016. “I thought, ‘Oh my gosh, I want to get to know this guy,’ ” she said. “It gives me faith, a lot, in humanity because so many people have been kind.”

But their relationship didn’t end there.

Hinton was invited back for Thanksgiving in 2017 and he brought his girlfriend, Mikela, along with him.

And on Thanksgiving 2018, Hinton happily tweeted that he was back at the Dench house enjoying Thanksgiving once again with his girlfriend.

We are going to do a Q and A type video tomorrow for Thanksgiving with Wanda so if anybody has any questions or thi… https://t.co/sqma6PddS9
— Jamal Hinton (@Jamal Hinton)1542822803.0

After three years, Dench and Hinton’s relationship is the perfect example of why Thanksgiving is so important. When someone opens their door and heart to  a stranger, it can be the beginning of a relationship that lasts forever.

Please pass the gravy … and a tissue.