This dance crew of women over 40 has all of the right moves.

'I'm not just 'over the hill,' but I'm coming down that hill with speed, baby!' 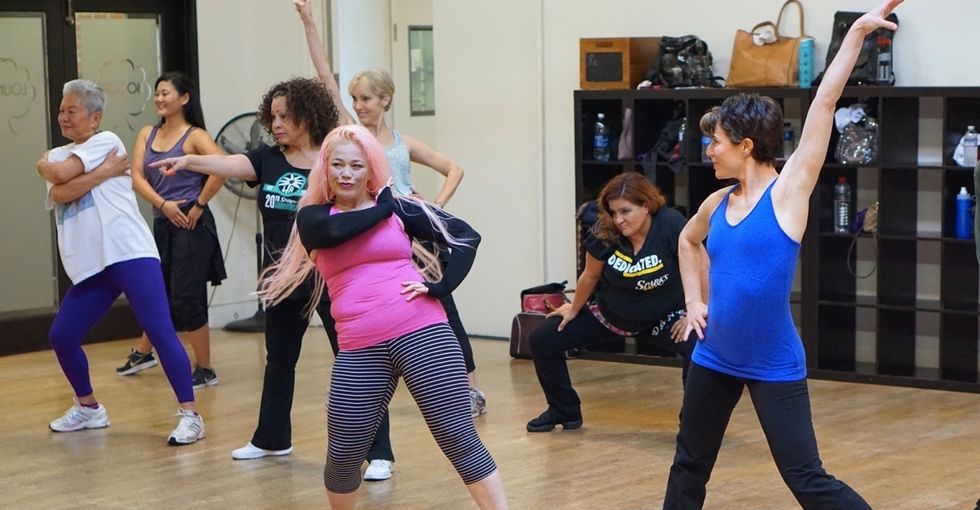 On a beautiful Saturday morning in Los Angeles, a group of women gathered together to get down.

All images from Ole Skool, used with permission.

The moves are top-notch. But this isn't your run-of-the-mill dance crew.

These women are mothers, grandmothers, teachers, and retirees to name a few — but the common bond they all have is they're over 40 years old and are passionate about dancing.

The fierce ladies of the Ole Skool dance crew.

News flash: No matter what the media tries to tell you, women don't expire at 40.

Are you looking for women over 40 in television or movies? Good luck with that because they are few and far between. Even though the majority of the female population in the U.S. is over 40, older men appear almost 10 times more often than women in the media.

The ladies on the Ole Skool crew want to flip the script. Not only are they all over 40, but they're here to tell you that they're living the best years of their lives right now.

Let's meet a few of them.

The baby of the crew: 42-year-old Richelle.

Richelle is a high school teacher and said that she learned to dance right around the time she learned how to walk. When she was in her 20s, she was a dancer for the Chicago Bulls during the Michael Jordan era.

Now? She's a 41-year-old mother of two with a simple message for her fellow moms:

When the L.A. Sparks formed a dance team back in 2004, Marilyn was one of the original members. 12 years later, the 63-year-old grandmother is still kicking (literally). With a smile to light up any room and the personality to match, Marilyn shares her perspective on the current state of her life.

"People say you're over the hill when you're 40," Marilyn told Upworthy. "I'm not just 'over the hill,' but I'm coming down that hill with speed, baby!"

The daughter of a legend: 58-year-old Virginia.

To say that Virginia's background is interesting would be an understatement. She's the daughter of musical legend Johnny Guitar Watson and said she was the casting director for Prince's first small acting gig in Los Angeles.

While growing up, she watched her dad revolutionize the music industry, and she's honored to be a part of team that's doing the same in the dance world.

"Make today the day that you step into your dreams," Virginia told Upworthy. "At the end of the day, the only person who can tell your story is you."

OK, so 31-year-old Lindsay's technically not a member of the team, but that's because she's the director and choreographer of the Ole Skool crew. She will be the first to admit that she was a little hesitant at first about coaching women who are old enough to be her mother, but now she understands the effect her team is having on women everywhere.

"Being around this team is one of the biggest blessings in my life," Lindsay told Upworthy. "Just by watching them, you can tell that they make the world a better place by performing and when they're out in society."

Make no mistake about it. The Ole Skool crew are doing amazing things on the dance floor, but their most valuable contribution is reminding us that anything is possible.

The bond between these ladies is a powerful one.

In a world where people throw the word "love" around so loosely, it's great to see a group of diverse women who truly love each other.

Their bond is forged by the intense happiness that comes from doing what they love in an environment where looks and age mean nothing (unless you're under 40, that is — then you'll have to wait your turn).

And in reality, if we all danced more — the world would be a happier place.

Check out the Ole Skool crew in action!