She was sexually assaulted, denied restitution and fined for protesting. Princeton students aren't having it. 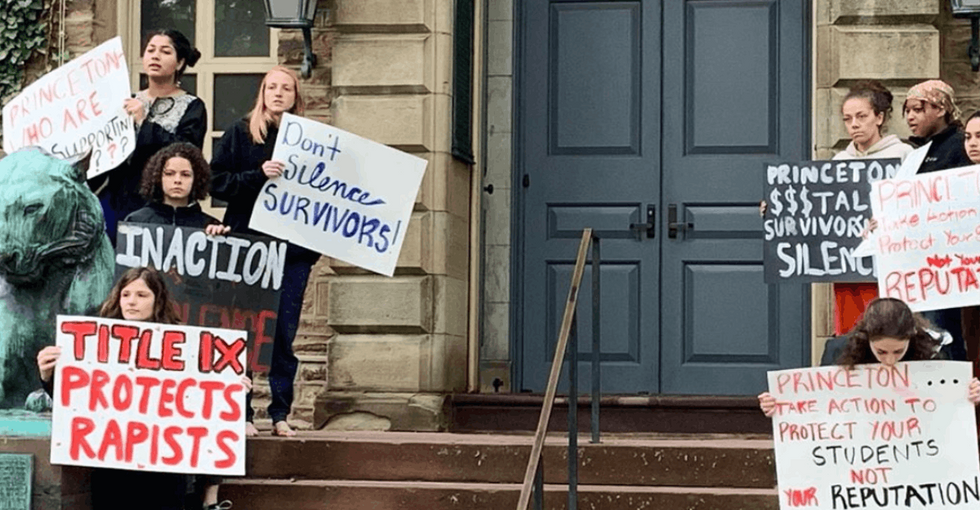 Women's rights over their own bodies are currently being threatened by a rapidly growing number of states in America. Sadly, they're also not being protected as they should be by some of its most prestigious educational institutions.

Back in 2016, a young women at Princeton University who's chosen to remain anonymous was raped by a male student. Last year, she reported the incident and her assaulter to the school’s Title IX office — a facility designed to protect students from gender-based violence and harassment on campus — in hopes of getting some sort of justice. The school, however, concluded that the male student in question did not commit the act the young woman said he did, and she lost the case. She filed an appeal, but lost that too a month later.

Understandably upset and frustrated, the woman decided to protest the school's decision and the Title IX's office's lack of support by writing a few choice words on a few spots around campus with a marker.

While she did deface University property, the University handed down a punishment that many felt was far beyond what was appropriate, especially considering she's a sexual assault survivor. According to Huffington Post, she was ordered to perform 50 hours of community service and pay the school $2,722.58 for cleaning costs. She was also put on four years disciplinary probation.

A university spokesperson did note that Princeton fully supports any student's right to peacefully protest, but made this clarification:

“Let’s be clear: Students are not disciplined for participating in peaceful protests or speech ― students are subject to discipline if they deface and damage university property. The range of penalties imposed by the university in vandalism cases may include suspension or probation, campus service, and required restitution, with the amount tied directly to the cost of repairing the damage to university property.”

In response to the school's lack of care for the assaulted student, a barrage of student protestors took to the campus streets last week, and have been virtually camped out in front of Nassau Hall, where Princeton President Christopher Eisgruber's office resides, ever since.

PrincteonIXNow, which helped organize these protests, presented the President with a list of 11 demands detailing a desire for more support and transparency for students who come forward and report events of abuse or harassment to Title IX.

"We call for the reform of Princeton’s procedures regarding sexual and interpersonal violence. We ask for more. Princeton is—and can be—better than this," they wrote in their formal appeal to the University.

As of this writing, the students have been peacefully protesting for nine days. The University has met with the organizers, and made a statement in which they claim they will take steps to rectify the situation. Many students, however, have said they refuse to give up the fight until actual action is taken.

Every woman deserves the right to protect her body from harm, and seek justice if that right is taken away. It's way past time for that right to be upheld in every space in this country, but especially at an institution of higher learning.