See how Banksy responded when an elementary school named a building after him. 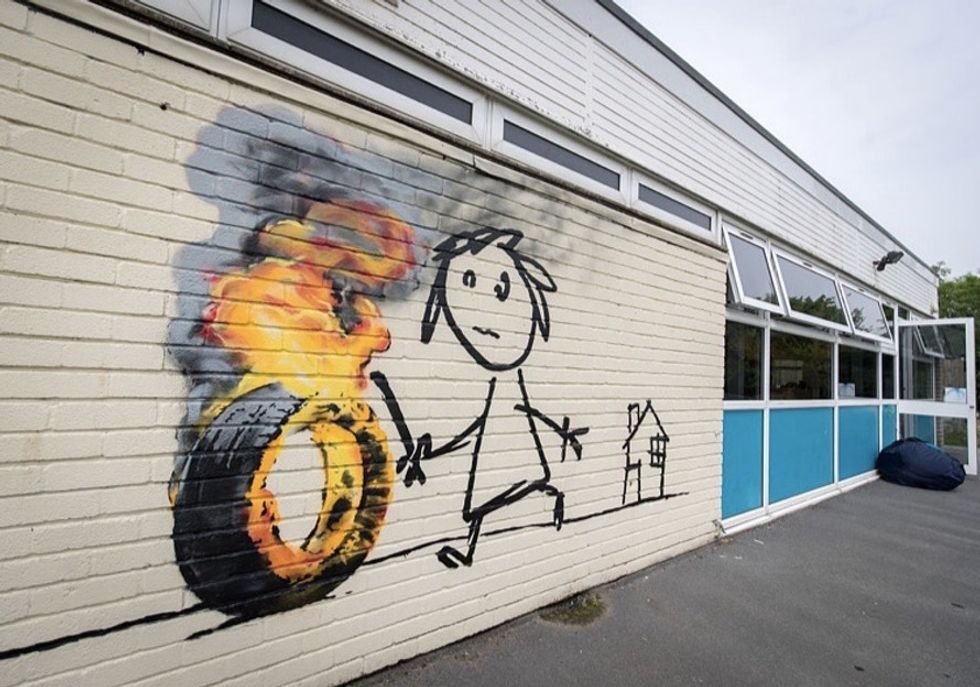 When the kids at this quiet elementary school in England were tasked with renaming their buildings, they never thought it would bring them international attention.

For the students of Bridge Farm Primary School, their mission was to rename several of the school's houses after notable people associated with the city of Bristol. The kids, ages 5 to 11, suggested names and voted for their favorites.

Named "houses" are an important part of the British school system. Yes, like in Harry Potter. Photo by Matt Cardy/Getty Images.

Among the winners were "Cabot," after John Cabot, the 15th century explorer; "Blackbeard," after the pirate; and "Banksy," after the infamous, as-yet-unidentified street artist who got his start in the Bristol underground art scene.

Banksy is one of the most well-known artists of our time. Sort of.

A legend of the street art movement, Banksy's iconic stencil work and provocative installations have appeared all over the world, sparking controversy, debate, discussion, and intrigue — not to mention millions of dollars at art auctions.

Yet despite how recognizable his artwork is, little is known about the artist. He's managed to keep his identity secret all this time and simply pops up in the middle of the night, leaving deceptively simple, thought-provoking artwork in his wake — and never revealing where in the world he'll show up next.

So you can imagine how surprised these kids were to find a brand-new Banksy piece on the wall of their school building when they returned from holiday break.

That's right. Banksy had come to the school and painted a 14-foot mural to thank the kids.

The painting is of a child rolling a hoop on a field containing a single flower — a reference to a Victorian-era game for schoolchildren. Only, as you can see, the hoop has been replaced with a burning tire. It's typical Banksy — dark and edgy, but also playful.

Banksy also left a note for the kids, thanking them and encouraging them to add to the mural if they "don't like it."

Although, frankly, there's a very small chance any of them won't like it.

“Dear Bridge Farm School,” Banksy's letter reads. “Thanks for your letter and naming a house after me. Please have a picture, and if you don’t like it, feel free to add stuff. I’m sure the teachers won’t mind. Remember, it’s always easier to get forgiveness than permission. Much love, Banksy."

I have to say, it's pretty nice to see Banksy's sweet side.

After all, he's an elusive artist whose work is often dark, politically charged, and, by its very nature, illegal. That said, he remains an important and iconic voice in the art world.

But once, he was just a kid from Bristol.

Clearly, he hasn't forgotten that, so it's awesome to see him give back (in some small way) to that community — and encouraging kids to be creative in their own way is a message we can all get behind.