See 9 dazzling photos of the world's most colorful places, including some close to home. 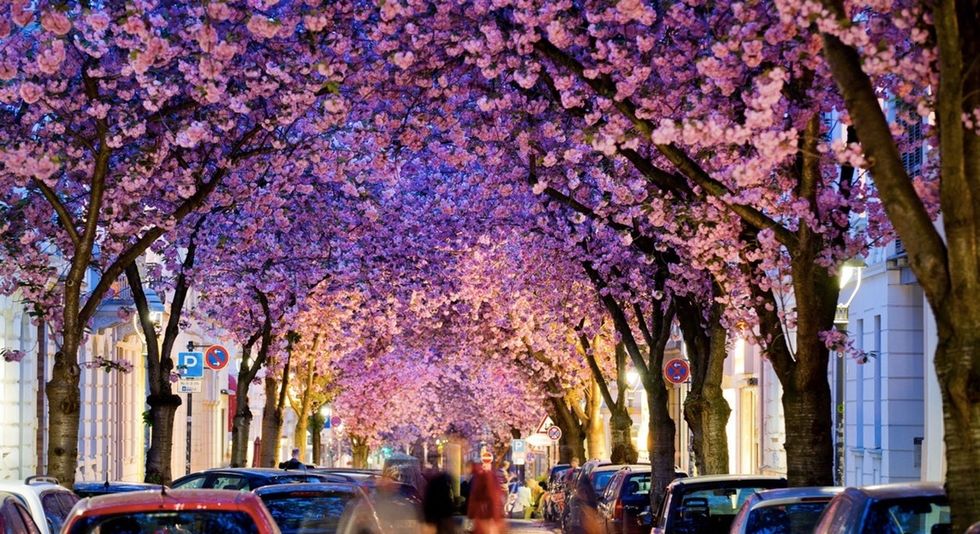 As far as planets go, Earth is pretty f@#$ing awesome.

We've got flowing freshwater, ice cream, Adele, and a few billion of the coolest people you'll ever meet.

Not to mention, this place is pretty darn gorgeous.

From soaring vistas to jagged mountains, rushing waterfalls, and hills that go on forever, you don't have to look far to find jaw-dropping beauty.

Here are nine of the world's most visually stunning places, alive in vibrant, eye-popping hues.

Since a large portion of Yellowstone sits inside the exploded crater of a volcano, the park is home to 500 geysers and over 10,000 thermal features, including Sunset Lake. The colors in this geothermal pool are caused by microbes like bacteria and algae that thrive in the water.

Hitsujiyama Park explodes with color as visitors stroll through fields of dazzling moss phlox flowers. The park boasts roughly 400,000 of the candy-colored blooms.

3. This golf course (which helped me understand why people might like golf) in Trou d'Eau Douce, Mauritius

Le Touessrok Golf Course and resort is nestled on the beautiful island on the left. Photo by David Cannon/Getty Images.

Yes, this is an aerial shot of a golf course on the picturesque island of Mauritius. If more golf courses looked like this, it might just make it interesting enough to watch.

The Crete Senesi vistas are some of the most beautiful landscapes in all of Italy. Dotted with farms, stoic trees, and even a medieval castle or two, these rolling hills are sure to take your breath away.

Rapeseed plants are used to make cooking oil and livestock feed. They're not to be confused canola plants, which also boast a bright yellow color. The vistas of Luoping are a popular tourist destination.

6. Lesser flamingos chilling on Lake Natron in the Arusha Region of Tanzania

No, lesser flamingos don't have self-esteem problems; that's just the name for the endangered salmon-colored birds who make their home in East Africa's Rift Valley lakes. Lake Natron is one of the primary breeding grounds for lesser flamingoes. Potential spoiler: The Tanzanian government may build a mine nearby, which conservationists fear would disrupt breeding.

7. An evening commute under flowering cherry trees in Bonn, Germany

A tunnel of gorgeous cherry trees in Bonn. Much like the cherry blossoms in Washington, D.C., many flock to this German city to see their enchanted flowering during their two- to three-week bloom every April.

8. So pretty. So salty. The Uyuni salt flats of southwestern Bolivia

Tourists, photographers, and sodium enthusiasts flock to Salar de Uyuni to get a glimpse of the beautiful landscapes. The flats contain an estimated 10 billion tons of salt and are visited by 60,000 tourists each year, many of whom capture some pretty kickass photos.

Fly over at your peril — the Midwest is home to friendly people, innovative hotdish, and sweeping fields that are tailor-made for getting lost in. Save this picture to your desktop to remind yourself that winter is only temporary.

The best part? These beautiful places are only the tip of the iceberg.

Actual iceberg tips, because even those are ridiculously good-looking. Photo by Marcel Mochet/AFP/Getty Images.

This post could be literally millions of photos long. But instead of over-exerting your scrolling finger, I thought it best to let you go and see all of that beauty and wonder for yourself. This planet is oozing with amazing sights, sounds, tastes, smells, people, and places.

Now get out there and explore the f@#$ out of it.