Scientists in Antarctica photographed a new species of crab. It's extraordinary he even exists.

He's been waiting for us a long, long time. 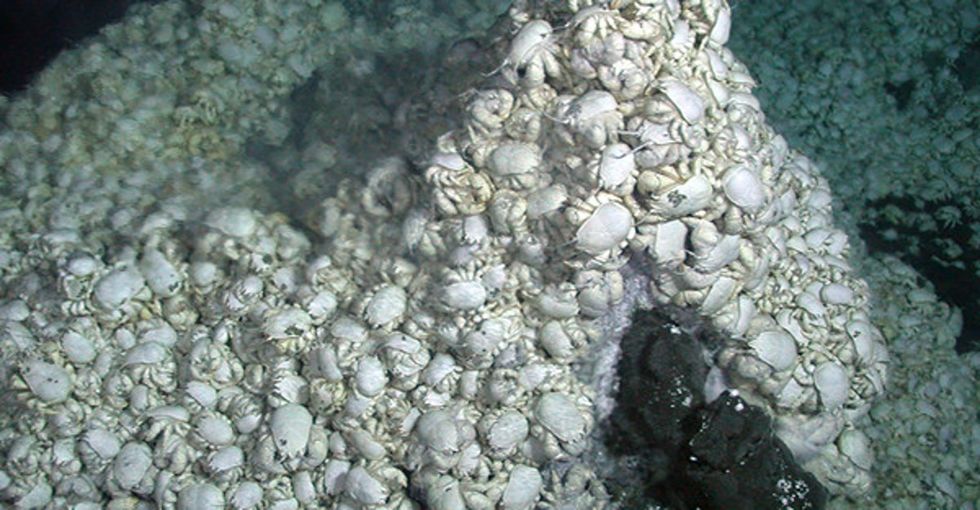 The bottom of the ocean is a weird, weird place.

Well, new to us. He's been around a while. Which is astonishing because he lives in conditions that would mean instant, terrifying death to nearly any other creature on planet Earth.

"This crab prefers temperatures between 95 and 104 degrees Fahrenheit, but finding water that meets these conditions isn't easy. To do so, the animal must hunker down very close to the mouths of hydrothermal vents, which spew out water as hot as 715 degrees. Due to the high pressure and frigidity of the surrounding water, though, the temperature quickly drops off, [lead author Sven] Thatje says. So they must spend their lives in a delicate balancing act, for if they get too close to the vent they will be scalded, but if they stray too far they will freeze."

Study leader Sven Thatje and his team scoped out the hardy little guys on a recent expedition to Antarctica.

They also shared some amazing pictures with the study they published in PLOS One.

Like this one, of roughly a billion yeti crabs comfortably clustering around a vent spewing superheated steam from the maw of hell:

There are quite a few species of yeti crab out there, but Kiwa tyleri is the first badass enough to make its home in the icy Southern Ocean.

Needless to say, he has to be very careful.

Oh, and guess what? Like the rest of his yeti crab brethren, Kiwa tyleri's got a hilarious nickname, based on everyone's favorite early-'90s floatie-based soap opera:

I'll give you one guess.

As far as I can tell, this mostly based on the fact that both man and crab are super, super hairy.

This, people, is why we have to save the planet.

Forget you and me.

Who cares? Image via Thinkstock.

This planet is home to a tiny, hairy crab who looks like a mythical mountain beast, eats bacteria for breakfast, lives around approximately 700 degree heat, and is nicknamed for a "Baywatch" star. Where else in the universe can say that?

Thanks, bottom of the ocean, for reminding us why we've got hella work to do.