Ruth Bader Ginsburg is in Trump's head. And she has no plans of leaving. 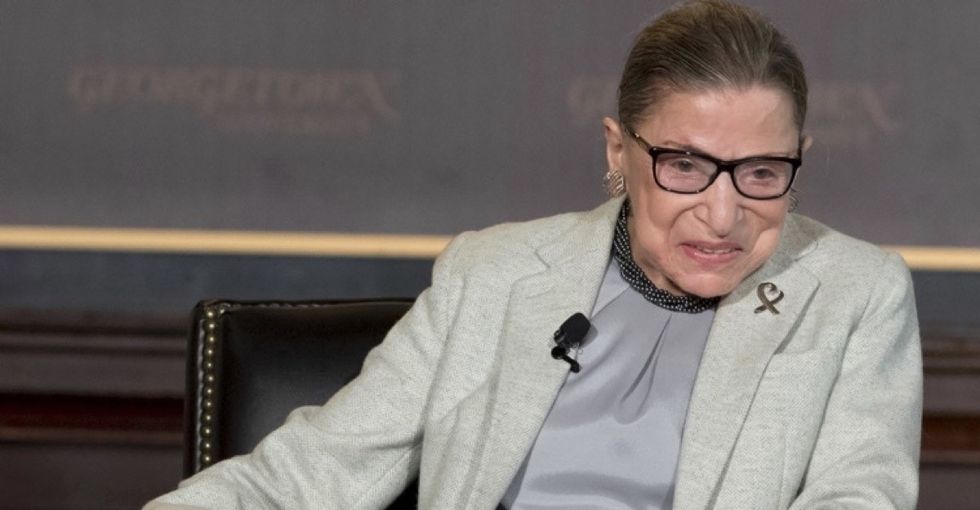 Ruth Bader Ginsburg did not come to play.

Appointed by President Bill Clinton in 1993, the Supreme Court Justice has served on the highest court for nearly 25 years. Ginsburg was the second woman to be appointed to the court and has served with distinction, proving herself to be a outspoken advocate for workers rights, civil rights, gender equality, and the separation of church and state.

Fans (yes, justices can have super devoted fans) look up Ginsburg for her intelligence, rapier-wit, courage, strength, and even her fashion sense. (Dig her imitated but never duplicated dissent collar.) There are T-shirts, necklaces, dolls, and a coloring book in her honor.

As the kids say, she's a badass.

And at 84, while many of her peers have been retired for decades, Ginsburg shows no signs of slowing down.

In fact, Ginsburg just revealed a subtle, yet pointed "Ginsburn" to the Trump administration.

Today, Ginsburg announced that she has hired law clerks through 2020, an indication she intends to remain firmly behind the bench through the end of President Donald Trump's first term.

Trump has long been a vocal critic of Ginsburg, even tweeting in 2016, "Her mind is shot — resign!" (It's probably no coincidence that just prior, Ginsburg called then candidate Trump a "faker" for not releasing his tax returns.)

Were she to heed Trump's advice, Ginsburg's retirement would free up another coveted lifetime seat on the Supreme Court, which the Trump administration would surely try to fill with someone more aligned with their political beliefs. In November, Trump even shared a list of conservative judges already in the running for his future Supreme Court picks.

But Ginsburg's move signals to Trump and anyone else in the wings, that she's not going anywhere.

Not only is she sticking around, Ginsburg's voice is more important than ever.

A levelheaded jurist like Ginsburg provides a much-needed check on the Trump administration's pointed attacks on immigrants, civil rights, and some of the basic tenets of the constitution.

In it for the long haul, Ginsburg, a two-time cancer survivor, has been celebrated for keeping her body and mind in peak condition by working with a personal trainer, and insists she'll stay in the job as long as she's able.

However long the notorious RBG serves, she'll likely have generations of supporters cheering her on (and making Trump stew in the process).