Protesters rushed to the airport this weekend but those at home made a big difference too. 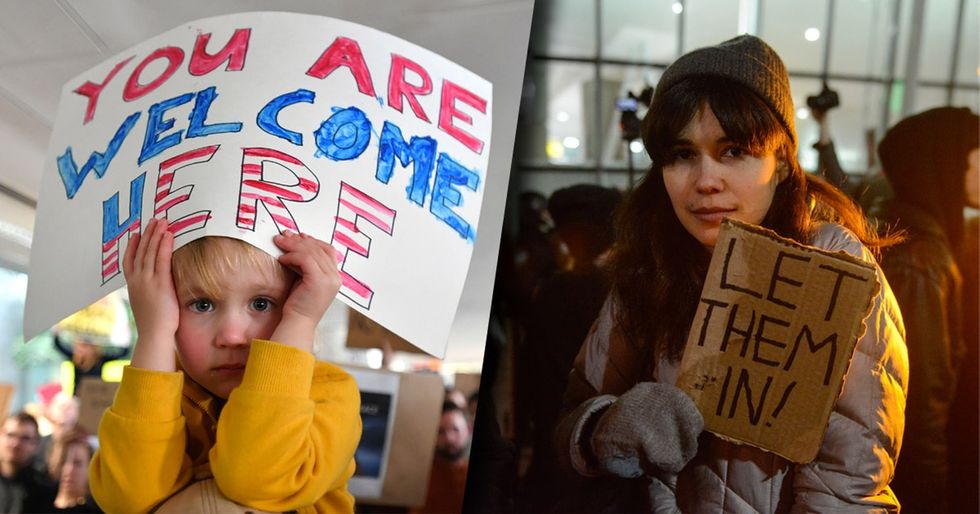 Crowds of people rushing to airports over the weekend weren't in a hurry to catch flights — they were making a mad dash for democracy.

Protesters at New York's JFK airport show what they think of the executive order. Photo by Stephanie Keith/Getty Images.

In response to an executive order issued by President Trump that restricted travel from seven countries, thousands of people showed up at airports in New York, Chicago, Los Angeles, San Francisco, Dallas-Fort Worth, Philadelphia, Boston, and other cities. They brought signs, demanded that those detained be let go, and cheered as people were released.

Not everyone was able to get to an airport, but that didn't stop them from getting involved from home.

While the American Civil Liberties Union was busy filing a suit against the Trump administration arguing the executive order was unconstitutional, hundred of thousands of people were putting their money where their Twitter retweets were by making online donations to support the organization.

People with slightly more money to donate, like singer/songwriter Sia, venture capitalist and occasional "Shark Tank" shark Chris Sacca, and producer/director Judd Apatow offered to match donations made to the ACLU up to a certain amount, allowing people to double the impact of their donations simply by tweeting proof of their contributions.

In one weekend, the ACLU received significantly more money than it usually does in one year.

As reported in USA Today on Sunday evening, the ACLU received more than 350,000 online donations totaling over $24 million since Saturday morning. The wave of online donations just goes to show that there are more ways to protest than showing up in a physical location and holding a kick-ass sign (although that certainly helps).

In the past few weeks, millions have turned out at protests around the country, but the airport protests against the Muslim ban — and the ACLU successfully securing a temporary stay on it — were a good reminder that there are forms of protest available to people who can’t show up in person.

Your voice, your donation, and your presence matter. Don’t let anyone tell you that you’re not helping the cause if you can’t get to a physical location. Just do what you can with what you have, wherever you are.