Amy's Drive Thru is changing the fast food game, one vegan mac 'n' cheese at a time. 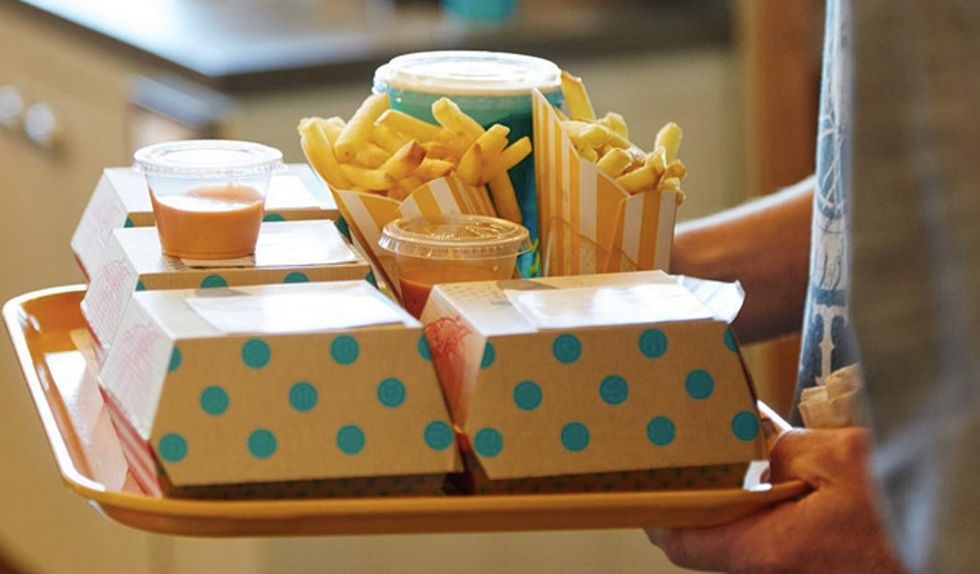 When you think about fast food, what comes to mind?

If you're like me, you probably start salivating as you imagine greasy burgers, gloriously deep-fried onion rings, and calorie-laden milkshakes. Yum.

Basically, this. Image via Thinkstock.

A new fast food restaurant in California is aiming to broaden that image by introducing a vegetarian option.

Andy and Rachel Berliner, the founders of Amy's Kitchen, originally launched their line of vegetarian frozen, canned, and prepackaged foods in grocery stores (you've probably seen Amy's organic, vegetarian, and vegan food in your local grocery store) after they found themselves frustrated with the vegetarian options available at the time.

Then the Berliners decided they wanted to take their mission one step further, envisioning a fast food restaurant where employees (who were paid a living wage plus health benefits) served vegetarian meals full of fresh local veggies.

That idea became Amy's Drive Thru, one of the first organic, vegetarian drive-thru restaurants in the country.

As of their opening in July, Amy's Drive Thru has proven to be a ridiculous success.

On opening day, Amy's served over 500 people — most of whom waited for more than an hour in line just to order. And although they expected business to slow a bit in the following weeks, the demand has just continued to grow.

There it is — the restaurant that vegetarian fast food dreams are made of. All photos below via Amy's Kitchen.

Why the crazy business? An Amy's spokesperson told Upworthy that it's likely all about pent up demand. People love fast food, but they want variety. And Amy's is delivering.

Not to mention, the food at Amy's Drive Thru is getting rave reviews.

Amy's serves organic veggie burgers, burritos, mac 'n' cheese, pizza, salads, chili fries, and even milkshakes (and, yes, you can choose from dairy or non-dairy options). Every menu item at Amy's can be made either gluten-free or vegan as well.

The coffee, vegetables, and even the milk come from local farms, too. "Our relationships with farmers and our knowledge of how to make delicious food on a large scale has really made this project possible. We've been able to keep the quality high and the prices reasonable," Andy Berliner said in a press release.

I know, I know — but this broccoli cheddar mac 'n' cheese is fast food, too. It's also vegetarian and chock full of local ingredients. Drool.

Allergic to gluten? No worries. You can order gluten free everything (including pizza) at Amy's.

So here's to reimagining fast food in a new way, and keeping low price points at the same time.

I don't know about you, but this double veggie burger might convert me to vegetarianism...

Fast food has become popular largely because it's convenient, easily available, and affordable, but we're all ears for ideas about how to add variety to that description.

Amy's Drive Thru seems to have it in the bag: fair wages for employees, local farm support, low prices, and a sustainable business model. Their tables, chairs, and building materials are even upcycled and sustainable.

So ... who wants to take a trip to California with me?