'No manspreading': Madrid adds a no-nonsense sign to its public transit vehicles. 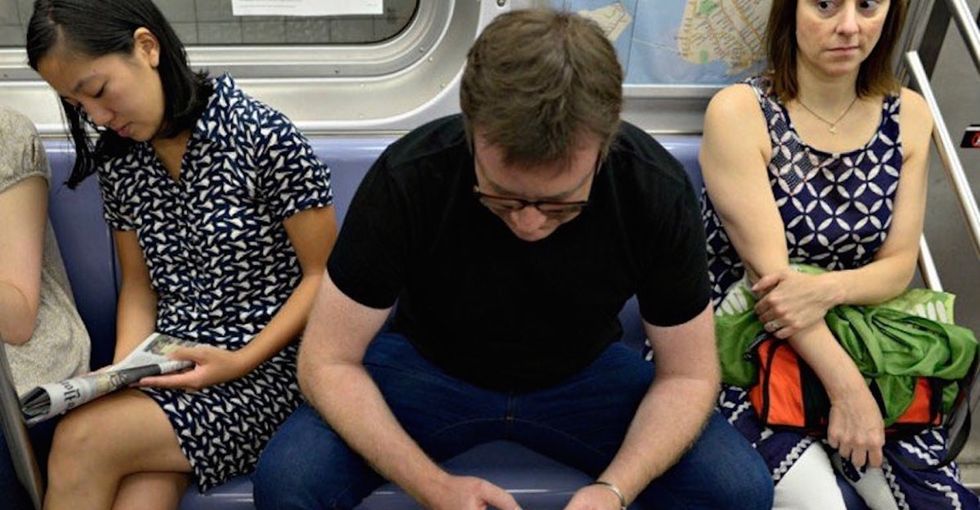 If you've ever ridden public transit, you've probably seen people sitting like this:

It's called "manspreading" — when some men in public take up way too much damn space.

Women — or, really, all people with some level of manners — have been complaining about this phenomenon for years. (The official name for it came about around 2013.)

It's not that people shouldn't sit in a way that's comfortable for them. It's that spaces like, say, the subway are public places, and taking up two seats with your legs spread apart is unbelievably rude and entitled.

Finally, after years of bystanders being squished to the side by wandering man-knees, one city is doing something about it.

The city of Madrid announced this week that it would be adding new posted signs inside its transit vehicles (next to the common ones like "No Smoking" and "Please give up your seat to the elderly.")

The new signs are a call for riders to "remember the need to maintain civic behavior and to respect the space of everyone on board," the announcement read.

Translation: You are allowed to take up one seat and one seat only. Also, no one cares about your balls.

Other cities around the world have been campaigning to end this obnoxious atrocity, too.

The Metropolitan Transportation Authority in New York worked on an ad campaign back in 2014 to combat manspreading. Some subway trains in Seoul, South Korea, now feature little heart-shaped orange stickers on the floor that politely remind people where their feet are supposed to go.

Some men will argue that if a woman (or anyone else) wants the man to move his legs so they can sit down, they can simply ask. But they shouldn't have to.

If it takes installing new signs on every bus and train in every country in the world for us to finally listen, so be it.