If you wanted to fly around the world, how much fuel would you need? The answer: zero. 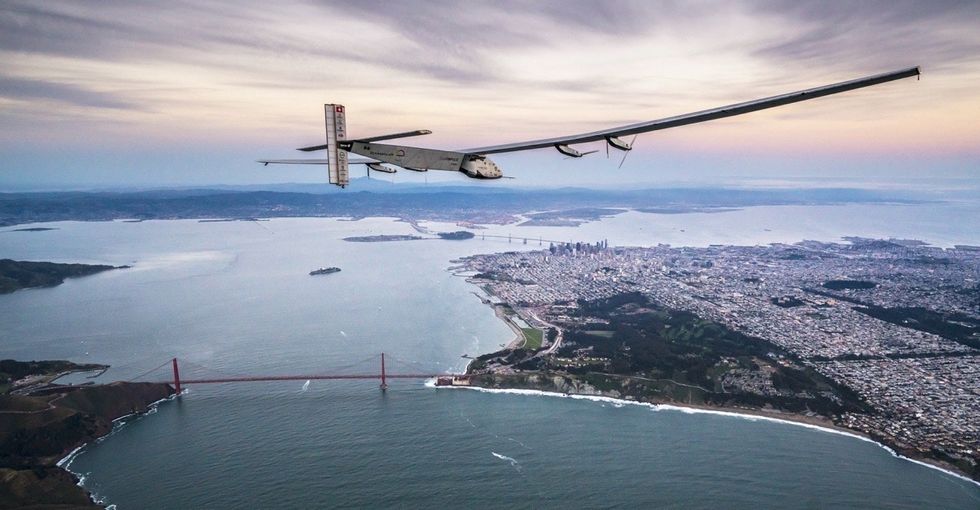 Heavier-than-air flight is mind-boggling when you think about it. I mean, a 737 can weigh over 75 tons.

Just going to ignore the fact that 12 elephants' worth of weight is probably directly over my head right now... Image from Philippe Huguen/AFP/Getty Images.

It takes a lot of fuel to keep them up in the sky, too. A 737 burns through one gallon of jet fuel roughly every five seconds.

That's about 750 gallons per hour!

So if you wanted to fly around the world, how much fuel would you need? As of this year, the answer is ... zero.

Yup, zero. As in nada. Zilch. One less than one. The big nothing. Zero.

This is the Solar Impluse 2. It's a plane powered completely by solar energy.

The plane is the child of the Solar Impulse project.

It doesn't use a drop of jet fuel. Instead, it generates electricity from solar panels on its 236-foot wings.

And if you're worried about it dropping out of the sky at night, don't. Batteries behind the pilot's cabin store plenty of power.

That's pretty slow compared to a 737's 600 mph, but since the sun isn't going to do anything weird anytime soon* the plane can effectively fly forever, stopping only for repairs and to let the pilots out.

The Solar Impulse 2 is just big enough for its two pilots: Bertrand Piccard and André Borschberg.

Piccard is a psychiatrist and explorer, and Borschberg is an engineer and entrepreneur.

Since Solar Impulse 2's departure from Abu Dhabi in 2015, the plane has already traveled 12,400 miles around the world.

Starting in the United Arab Emirates, the plane has visited Oman, India, Myanmar, China, Japan, and, most recently, the United States.

Along the way, it's set new world records, including longest distance travelled by a solar plane and longest solo flight time of any aircraft.

The latest leg of its trip was a 62-hour journey from Kalaeloa airport in Hawaii to Moffett airfield in Mountain View, California.

Next, the plane will travel over the U.S., then onward across the Atlantic Ocean to either North Africa or Southern Europe before continuing back toward its starting point in Abu Dhabi.

While the Solar Impulse 2 isn't going to put Boeing out of business anytime soon, that's not the point. The point is to show that clean energy is not only possible, but already here.

In fact, #FutureIsClean, an initiative started by Solar Impulse, claims that these same technologies could be used right now to reduce our energy consumption by 50% if we only had the spirit and will to implement them.

Humans have everything we need to convert to clean energy. We just need leaders and explorers to make it happen.

Watch Solar Impulse 2 fly over the Golden Gate Bridge below: