How one woman's selfless kidney donation made her a hero, 7 times over. 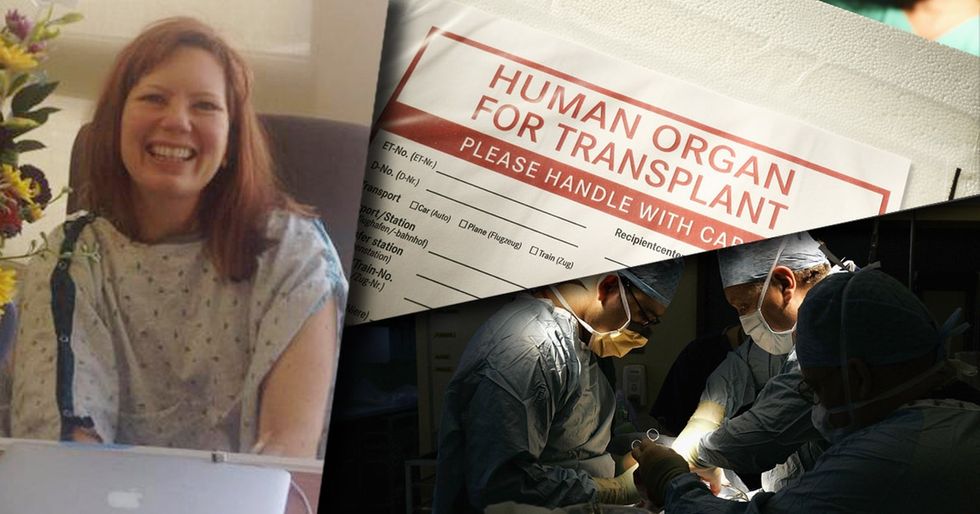 They took out Stacey Donovan’s kidney and put it into something that looked like a beer cooler.

The container appeared better suited for a picnic than an operating room. But in a short time, that cooler — and Donovan’s kidney — would be flying over 1,500 miles to San Diego to meet its new owner.

Her donation would also set off an amazing chain reaction that would change not just one life, but seven.

It all started in 2013 in Prairie Village, Kansas, where Donovan lives with her husband and three rescue dogs.

While reading a science magazine, Donovan came across an article about the immense need for kidney donations. Estimates indicate that 600,000 Americans suffer from kidney failure, a serious and potentially fatal condition. Dialysis is the solution for many, but it can be exhausting. The typical procedure takes four hours at a time, has to be done three times a week, and can cause cramps, headaches, and vomiting.

A close-up of an artificial kidney machine. Image from iStock.

A kidney transplant is usually the only way for patients to be free from dialysis, but kidneys are in short supply. The waiting list is almost 100,000 people long, according to the United Network for Organ Sharing. Many people end up waiting for years.

“It just sounded like such a difficult, hard-to-keep-your-hope-up kind of existence,” said Donovan.

Donovan decided to do something most people have probably never considered. She was going to donate a kidney.

“It wasn’t a difficult choice. I’ve taken more time deliberating whether to grow out my bangs,” she’d later write for XOJane.

But her family, especially her husband, wasn’t so keen on the idea. The surgery itself is pretty safe, but all surgeries come with risks. Plus it’d mean Donovan, with only one kidney, would be taking on a new pre-existing condition.

“The one thing that was reassuring for him, and kind of helped me win the debate, was the Affordable Care Act,” said Donovan. The law's pre-existing condition clause would protect her from rate hikes or denial if she ever needed to buy insurance again in the future.

Family convinced, Donovan contacted the National Kidney Registry, an organization that plays matchmaker for organ donors. For the next four or five months, Donovan went through a battery of checkups, stress tests, and urine analyses to make sure she was healthy enough to donate. She also had to send vials of blood for organ compatibility tests. She said that after enough vials, it became easy to imagine the National Kidney Registry as the front for some very sophisticated vampires.

Eventually they found a match — a man in San Diego.

Donovan had never met the man who would get her kidney. She didn’t even know his name.

Donovan and her husband drove to Barnes-Jewish Hospital in St. Louis for the surgery. After she woke up, a nurse told her, “Welp, nobody can ever say you never did anything nice for anyone.”

Donovan the day after the surgery. Photo from Stacey Donovan, used with permission.

But Donovan’s kidney was only the start of this story.

Because of Donovan, the San Diego man’s wife decided to pay the good deed forward and donated her own kidney to another unrelated recipient. And that in turn set off another donation. And another. And another. In total, Donovan’s initial donation ended up getting seven different people new kidneys.

It was a lifesaving effort carefully planned by the National Kidney Registry.

When a person needs a kidney, friends and family often try to donate but many find out they’re not compatible. In the past, this would be the end of the story, but starting in the late-1980s, doctors and hospitals realized they could simply swap who gets which kidney. Sometimes, these were simple exchanges, but sometimes a single altruistic donor can set off a chain reaction — a donor like Donovan.

Today, Donovan's back to her old life, though now she's worried others might not be able to follow in her footsteps.

Donovan says lately she’s been worried about what will happen if the Affordable Care Act's pre-existing condition clause is changed or repealed. The safety ensured by that law played a big part in convincing her family that she should donate.

“My main concern with that is what it'll do with the number of donors,” said Donovan.

What'll ultimately happen to the health care law is still unclear. The latest attempt to repeal and replace tries to keep the pre-existing condition clause, but introduces a loophole that’d allow insurers to charge more if a patient has gaps in their coverage record. And it's not clear if this bill will pass Congress.

Troy Zimmerman, vice president of the National Kidney Foundation, said he thinks the doubt around the Affordable Care Act could certainly affect the number of living donors.

Donovan still hasn’t met the man who got her kidney, but she has been able to get a glimpse of what it meant to him and his family.

About a week after the surgery, Donovan ended up getting a special package in the mail.

“I got all these handwritten letters from his family members,” said Donovan. It turned out the man wasn't just somebody's husband — he was a father and grandfather. In the letters, grandkids explained how the man could now go to the beach with them again. He could see them graduate.

The man's wife wrote as well. In her letter, she described life before the donation. It read, "...He's in the back room all the time in pain." But thanks to Donovan's generosity, she said, that pain could fade away.

And after his transplant, it did.