Democrats are staging an incredible anti-gun protest on the House floor. 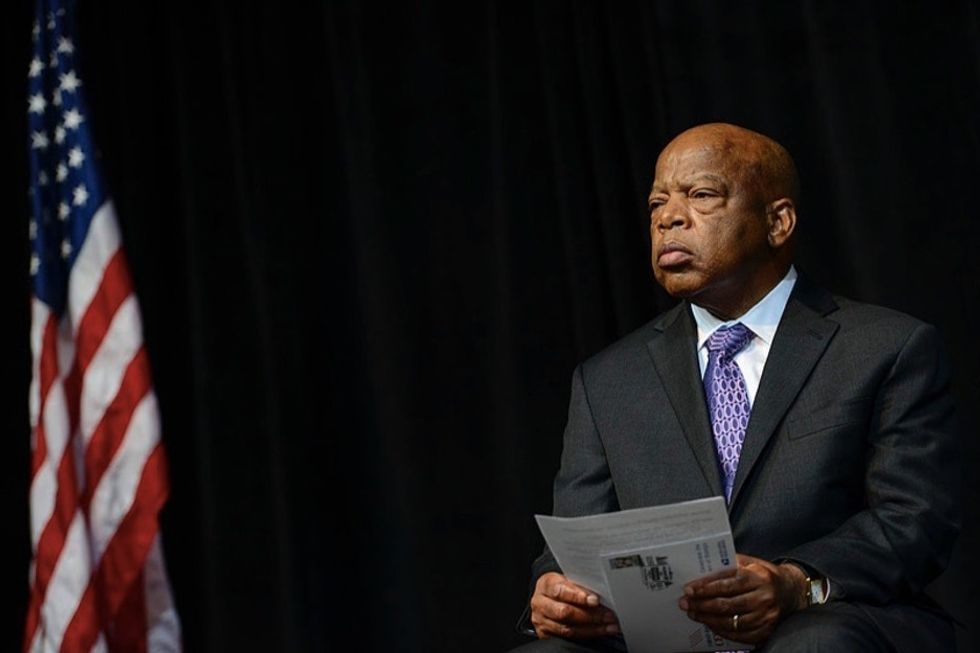 After every mass shooting, America holds its breath, wondering if this will be the one — the one that finally forces lawmakers to step up and enact the common-sense gun control measures that the majority of Americans support.

The one that gives us respite from the the tears, the anger, the candlelight vigils, and the mourning of children.

Students at Virginia Tech hold a candlelight vigil for the victims in Orlando. Photo by Chip Somodevilla/Getty Images.

It didn't happen after Aurora, when a man opened fire in a crowded movie theater, killing 12. It didn't happen after Newtown, when 20 children aged 6-7 and their teachers were killed in their elementary school. It hasn't happened for any of the thousands of families mourning the loss of a loved one to gun violence in 2016 alone.

After the killings in Orlando in June, the deadliest mass shooting in U.S. history, in which one man killed 49 people and injured 53 more in the span of a few short hours, we held our breaths again, wondering again if things would change.

Days after the massacre, Sen. Chris Murphy (D-Connecticut) staged a filibuster demanding action on gun control. He was joined by more than 30 of his colleagues.

The filibuster lasted 15 hours, and the Senate ultimately agreed to vote on the amendments Murphy was representing.

Days later, the Senate voted and rejected both amendments.

Today, House Democrats are staging a sit-in on the floor of the House of Representatives, demanding action on gun control.

The disruption has already forced the chamber into temporary recess twice, and eventually, C-SPAN cameras were shut off. Democrats began tweeting pictures from the sit-in with the hashtag #NoBillNoBreak.

The "No Bill No Break" campaign is designed to force Republican lawmakers into enacting gun control measures before the chamber takes a weeklong break.

Leading them: Rep. John Lewis, a civil rights leader who marched with Martin Luther King Jr. in the 1960s.

“For months, even for years, through seven sessions of Congress, I wondered, what would bring this body to take action?” Lewis (D-Georgia) said shortly before the sit-in.

"We have lost hundreds and thousands of innocent people to gun violence. Tiny little children. Babies. Students. And teachers. Mothers and fathers. Sisters and brothers. Daughters and sons. Friends and neighbors. And what has this body done? Mr. Speaker, not one thing.”

It's unclear if the House Democrats will have any more success than their colleagues in the Senate, but it's a relief to see lawmakers doing anything they can to enact effective gun control measures.

Even President Obama has voiced his support for Rep. Lewis and the protest:

And Rep. Keith Ellison's mom pulled him out of a meeting with an important message about the sit-in:

Ideally, lawmakers represent the will of the people. In reality, however, powerful lobbying forces like the National Rifle Association still hold major sway over many of our representatives.

The fact that the very people we elect to make the laws are resorting to protest tactics just to try to move things forward — after exhausting all their other by-the-books options — shows just how much of a stranglehold the NRA has on Congress.

Lawmakers doing more than just holding their breath is a welcome sight.

Whether the sit-in today will be enough remains to be seen.

But as the parable goes: "Never doubt that a small group of thoughtful, committed individuals can change the world.

It's the only thing that ever has."