Dear fellow Americans: We don't need to be so afraid. 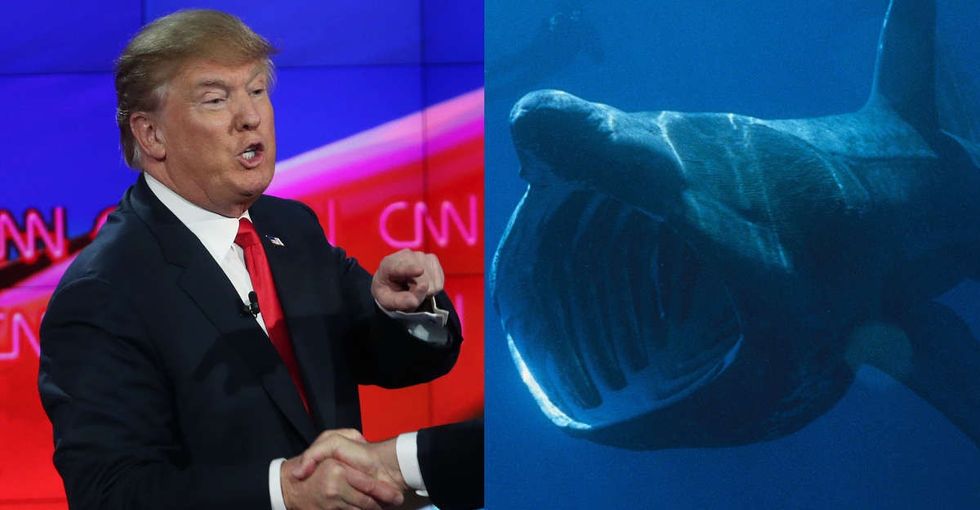 Ladies and gentlemen, the star of "Shark Week!" Photo by Hermanus Backpackers/Wikimedia Commons.

Once a year, the Discovery Channel airs seven days of captivating, ostensibly educational nature programing that is, in reality, single-mindedly devoted to scaring the living daylights out of everyone who watches it.

It is — to put it mildly — the absolute greatest.

From the looks of it, you would think sharks were going around eating thousands of humans a year with impunity, high-fiving their fellow sharks and dropping sick shark raps about all the bodies they've dropped.

The average number of people killed annually by sharks in reality?

Last night's GOP debate was a little like "Shark Week."

Ladies and gentlemen, the stars of the GOP debate! Photo by Justin Sullivan/Getty Images.

The nine top Republican candidates and the four in the undercard debate gathered in Las Vegas to talk amongst themselves (or in Chris Christie's case, to glare directly into the camera with the uncomfortably piercing gaze of a disappointed father). It was billed as the "National Security Debate," or, alternately, the "Foreign Policy Debate" — the sort of description that might lead one to expect a passionate discourse on the nuances of statecraft, or an in-depth dialogue on how conservative diplomacy might offer notes of contrast with the current administration's practice of the same.

Instead, the basic gist of the whole event was: Look out behind you! ISIS terrorists are coming to your house. Be afraid! Be very afraid.

Christie declared, "We have people across this country who are scared to death." Marco Rubio suggested that ISIS is "not just the most capable, it is the most sophisticated terror threat we have ever faced." Rick Santorum, in the JV session, legit argued that "We have entered World War III."

The words "terror" or "terrorist" were mentioned 77 times in the main debate. 120 times if you include the earlier debate.

The candidates' ideas for defeating the extremist group ran the gamut, from dropping the same amount of bombs as now but bragging a little bit more about it, to carpet-bombing cities in Syria and Iraq to ensure that when we kill a few dozen ISIS operatives, thousands of innocent people who also hate ISIS die too.

And perhaps most plausible solution of all: saying the words "radical Islamic terror" over and over again until the terrorists presumably throw their guns into the sea in panic and turn themselves in.

Overall, the debate was really entertaining. And also extremely scary.

You can't really blame the Republicans for going whole hog on the terror threat.

A whole hog. Photo by abbamouse/Flickr.

Fear can be a highly effective political motivator. If you're scared, there's a good chance you'll blame the current president and be more willing to take a chance on the guy from the opposing party who promises to keep you safe.

And while the candidates' reactions may have been a tad on the severe side, the question they posed is totally fair game and worth talking about:

How scared of "radical Islamic terror" should we really be?

A memorial to the victims of the November attacks in Paris. Photo by Matthieu Alexandre/Getty Images.

Since Sept. 11, 2001, terror attacks committed by Islamic extremists have killed an average of just over three Americans per year. Three people is certainly not nothing! If three people I knew died randomly and horribly, I'd be pretty upset — and I'd definitely put preventing more people from dying the way they did near the top of my priorities list.

However, here is a brief list of things you're more likely to have on your death certificate than "killed by radical Islamic terrorists" if you're an American:

It's not at all wrong to be scared of terrorism. The whole point of terrorism is that it's scary. It's violent. It's unpredictable. And it's committed by human beings, many of whom are quite terrifying. Every time some vicious jerk walks into an office party with a gun or sets off a soda-can bomb on an airplane, I launch into the same fear/panic/despair cycle that my therapist is entirely sick of hearing about.

Put simply, America has seen some shit. We survived a political and military revolution, centuries of brutal human bondage, a bloody civil war, two world wars, legal segregation, a 47-year-long nuclear standoff with a global superpower, and four seasons of "Mind of Mencia."

When it hits the fan, we can be pretty stone-cold about shutting it down.

ISIS is certainly evil and pretty ho-hum about killing people. But the idea that the group poses an existential threat to the United States — like Nazi Germany or the nuclear arms race or slavery — is ... more than a bit far-fetched.

And the people who ISIS does pose an existential threat to? Many of the same folks talking tough on stage last night are pretty dead-set against letting them move in next door.

ISIS is indeed scary. It's totally fair to note that. ISIS also adheres to an extremist brand of Islam. It's similarly fair to point that out and debate what it means for how we fight them. But there's a responsible way to do that, and then there's this — the leading presidential candidate of a major U.S. political party arguing that ISIS's barbarism justifies barring all Muslims from entering the United States.

It's easy to forget that if you go around on national television blurring the line between "Islam" and "what you should be scared of," sometimes people listen.

There have been over 45 documented Islamophobic incidents in the United States since the Paris attacks in November, including vandalism, attacks on mosques, and straight-up physical assault — sometimes of children. While politicians may not mean to incite acts of violence with their anti-Muslim rhetoric, extreme fear can lead people to do things they otherwise wouldn't, hitting back indiscriminately at the wrong target in the name of feeling a little bit more safe.

Beyond that, it just kind of sucks to be scared all the time.

Here's what not-scared people can do! It's pretty sweet. Photo by SimonP/Wikimedia Commons.

I like watching horror movies. I can watch all manner of gruesome, terrifying torture and gore if I know there's catharsis coming at the end. But I resent it when people try to scare me in an open-ended way. 'Cause being scared with no hope for release is pretty much the worst.

Terrorism is scary and random, but it's not even close to the most pressing danger facing any of us on a daily basis. It's not always easy to internalize that — in many ways, it feels counterintuitive. But once you do, it's pretty easy to cease being afraid, or at least stop letting that fear rule your life.

Go out! Go to concerts. Walk through the park. Take a lap around the mall. Browse and don't buy anything at Brookstone.

Something bad can happen when you're doing pretty much anything. Every time you shower, there's a not-zero chance you could slip and die. Most of us still do it every morning — and enjoy it too.

So take a deep breath. We've been through this before. And we'll get through it again.

Photo via the FDR Library/Wikimedia Commons.

Remember the Great Depression? Probably not, if you're effectively navigating the Internet without the assistance of your great-grandchild. But it was one of the objectively scariest times in American history. Unemployment skyrocketed to over 25% (as a comparison, following the financial crisis of 2008 — the biggest U.S. economic catastrophe in recent memory — unemployment peaked at 10%). Millions lost their homes, farms, and entire livelihoods. Fascism was on the march worldwide, and many feared (and some hoped) the United States would be next.

In the midst of all this, at the beginning of the worst year of the Depression, brand-new President Franklin Delano Roosevelt stepped up to the mic and dispensed some sage, fortune-cookie-ready advice. Not "Pee your pants, everybody" or "Hide under the covers forever" or "Oh God, oh God, oh God" while rocking back and forth in a fetal position.

"The only thing we have to fear is fear itself," he said.

Though 80 years have passed since then, and there are fewer apple barrels around these days, the sentiment still rings pretty much true.

Because as a wise Jedi muppet once opined: "Fear leads to anger. Anger leads to hate. Hate leads to..."

...a chill weekend at Comic-Con. Photo by Doug Kline/Flickr.