Caring for her grandma revealed an underappreciated task almost all caregivers have to do. 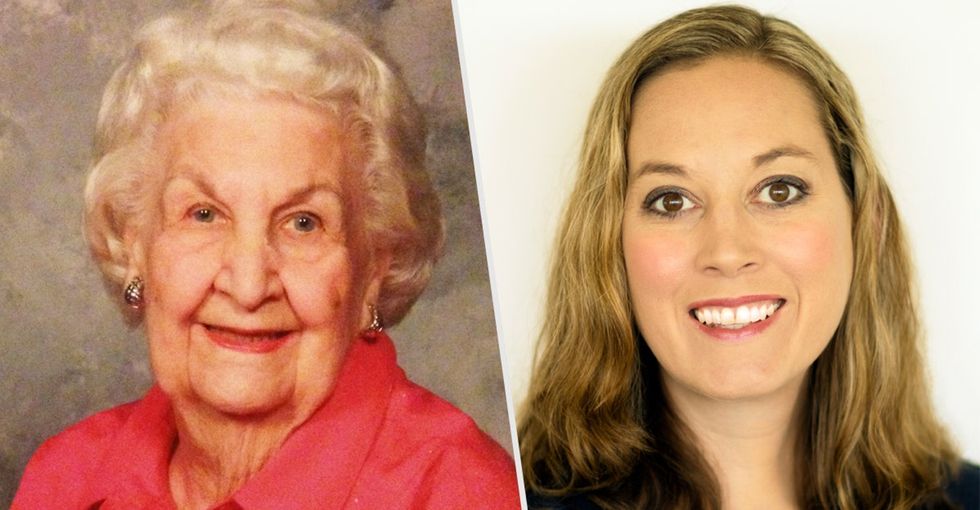 When Miles Taylor was a teenager, she and her little brother moved in with their grandma Betty, who essentially became a single parent at nearly 80 years old.

An untenable family situation prompted the change, which Betty took in stride. It was a move that must have taken some "grit and guts and probably a real fine-tuned sense of humor" on Betty's part, says Taylor.

Taylor is now a sociologist at Florida State University. She says Betty, who died in 2015 at the age of 100, was a huge influence in her life. Betty was resilient, quick-witted, compassionate, and could at times be incredibly stubborn (as the doctor who tried to get Betty to stop eating candy learned). "And she had an unbelievable capacity for love," says Taylor.

Miles Taylor and her grandma Betty. Photos used with permission.

As Betty got older, she started needing some extra help, and Taylor was there to contribute.

"It was small things in the beginning," Taylor says. "She needed help putting up a Christmas tree. Then, as she got a bit older, she needed help with getting groceries delivered." Taylor, her brother, friends, and neighbors all helped out.

Then, in 2011, when Betty was about 96, she fell and broke a bone in her back. Taylor knew that from then on, Betty would need a lot more than just help with the Christmas tree, so she stepped into the role of Betty's full-time caregiver.

In 2015, about 1 in 7 American adults served as caregivers for someone over 50, according to an AARP report.

The numbers are even higher if you count those taking care of other recipients, like adults or children with injuries or disabilities. Many of these caregivers are pretty young as well — about a quarter are under 35.

Although many people feel positively about being caretakers, it can be physically, mentally, and emotionally tough work. In fact, there have been many studies and papers about the stresses of being a caretaker.

Most of these studies have focused on the caregivers' relationships or on the stresses around very personal tasks (such as helping people bathe). But when Taylor stepped into this role, she realized there was another, huge aspect of a caregiver's job — one she had known about but couldn't have predicted how stressful it'd be.

Handling Betty's personal care was one thing, but Taylor was surprised at how much time she had to spend just figuring out the health care system. Even as someone who had time and a bit of inside knowledge, it was really difficult.

For example, Taylor knew if Betty was ever to get mobile again after the fall, she'd need rehab to help with strength and balance. But a snafu with how the hospital had listed Betty on their charts meant her insurance wouldn't cover rehab. It took weeks to fix.

"It was very frustrating," Taylor says. Over and over again, she experienced similar issues.

Though Taylor says she was never disappointed in the care Betty received, many of the various institutions — hospitals, insurance agencies, care services — were fragmented. They didn't communicate, which meant the job of sorting everything out fell to Taylor.

When Taylor talked to other caregivers, many of them felt the same way.

Now Taylor has published a paper she hopes will help reveal this invisible workload.

As she cared for Betty, Taylor found support in her friend and colleague Dr. Amélie Quesnel-Vallée of McGill University in Quebec. Quesnel-Vallée was also caring for an older family member — her mother. And though Quesnel-Vallée lives in Canada, they found a lot of similarities in their experiences.

Together, they wrote a scientific paper informed by their own experiences as caregivers, published in The Gerontologist. They're hoping researchers and policymakers will take notice and maybe even make some long-term changes.

"It's important those caregiving hours and that caregiving stress is recognized," says Taylor.

But they also had a message — not just for health care professionals, but for other caregivers too:

"On the more personal side of things, a message we'd like to send out to caregivers themselves is they're not alone," says Taylor.

The AARP report suggested that most caregivers in the U.S. are stepping into this caregiver-plus-case-worker kind of role. It's important for caregivers to know that although it's often invisible, their work is valuable and valued.

Caregiving is hard, often invisible work. Through sharing stories like this, we can help bring it into the light and give it the attention and credit it deserves.