Ancient skeletons are upending what we know about how far women traveled in the Stone Age. 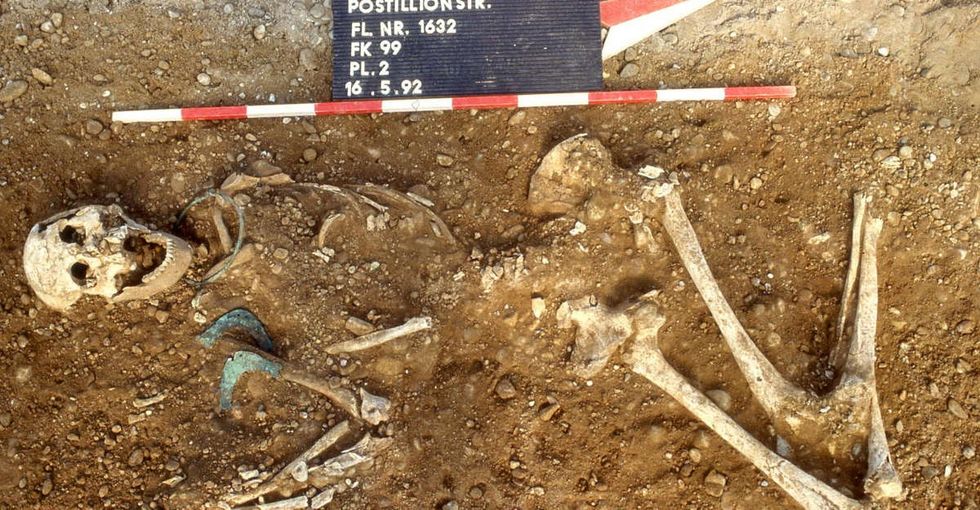 Early man. A proud, chiseled, oil-chested warrior who roamed the land, hauling boulders to build his boulder house and punching mastodons in the throat.

Early woman. A helpless homemaker who to tended her 15-37 children and gathered grapes from the local grape bush.

It's an enduring image, oft repeated in literature, film, and car insurance commercials.

A new study, published in Proceedings of the National Academy of Sciences, found that Stone and Bronze Age women did a lot more traveling than their male counterparts — at least in one region of Europe.

The researchers examined the remains of 84 individuals buried south of Augsburg, Germany. Through chemical and genetic analysis, they determined that a majority of the men were born locally, while the bulk of the women hailed from Central Germany or Bohemia in modern-day Czech Republic, hundreds of miles away.

"We see a great diversity of different female lineages, which would occur if over time many women relocated to the Lech Valley from somewhere else," Alissa Mittnik, one of the study's lead researchers, said in a statement.

The "foreign" women were buried with the same rites as the men, indicating that they had been integrated into local society.

Most traveled as individuals, rather than in groups, suggesting that they were "moving for marriage, not for servitude or something like that,” Mittnik told Inverse in an interview.

Researchers believe this "institutionalized form of individual mobility" was a key driver of cultural exchange.

Many of the tools and technology found at the sites were determined to have originated farther north, evidence that they may have been brought by the women.

By the standards of their era, these women were world travelers.

The researchers hope that further study will provide more clues as to how freely, frequently, and extensively Bronze Age humans migrated.

The ancient women of Central Europe may not have hunted mastodons, but they're continuing to upend conventional wisdom of gender dynamics in millennia-old human societies and assumptions about the way things have always been.

While the historical record frequently marginalizes the contributions of women, the study is evidence that, in at least one region of the world, their migration was crucial to the cultural and technological advancement of their societies, even if it was for marriage.