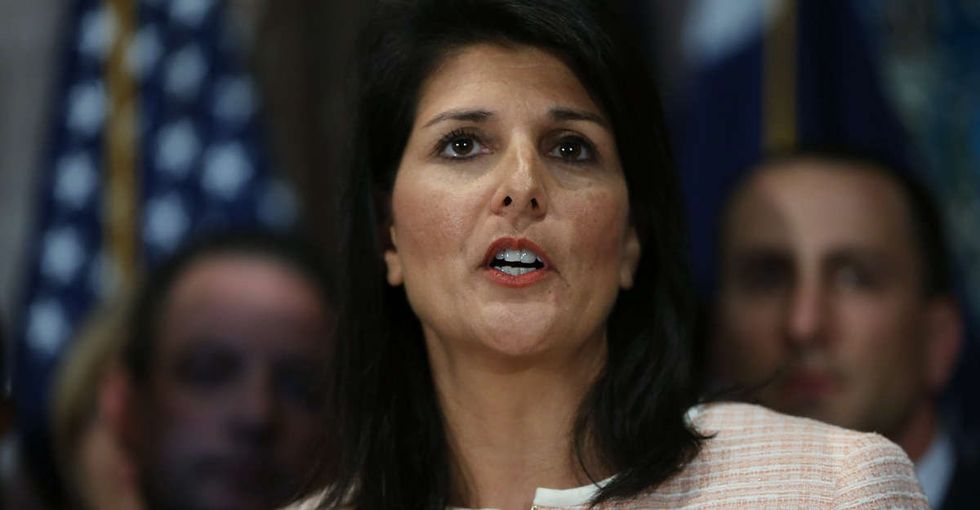 On June 17, 2015, South Carolina Gov. Nikki Haley got an up-close-and-personal lesson in how bigotry can lead people to do the unthinkable.

A memorial outside the Emanuel AME Church in Charleston, South Carolina. Photo by Joe Raedle/Getty Images.

Nine black men and women were murdered at the Emanuel AME church in Charleston in one of the worst hate crimes in the state's history.

A subsequent investigation found that the alleged shooter, Dylann Roof, was an ardent white supremacist who frequented neo-Nazi websites and worshipped the Confederate flag.

The events of that day left Haley with no illusions about how dangerous Donald Trump's "divisive" rhetoric really is.

Since Trump began running for president in 2015, he has proposed banning Muslims from entering the United States, called Mexican immigrants rapists and criminals, openly demeaned women, and refused to disavow his white supremacist supporters.

In an interview with the Associated Press, Haley stressed her personal experience in her warning that words like Trump's can have terrible, real-world consequences.

"I know what that rhetoric can do. I saw it happen," the South Carolina governor said.

Haley told the AP that, as one of two leading candidates for president of the United States, the businessman has a responsibility to the country to adopt a more civil tone.

The governor's statement is an important acknowledgement from a prominent Republican that Trump is playing with fire...

...and not just because Trump has already openly called for violence against people who oppose him (on more than one occasion).

He may not personally condone — or call for — racist, misogynist violence, but can he truly be sure that a troubled few among his millions of followers won't feel empowered to take matters into their own hands?

Haley's apparent misgivings about Trump's rhetoric didn't stop her from endorsing him.

And, of course, Trump supporters aren't the only group who have perpetrated mob violence against their opponents in the course of this campaign.

But the governor's blunt warning shouldn't be ignored.

If hateful words buried in obscure corners of the internet can inspire terrible cruelty and brutality, imagine what they could do coming from the mouth of the president of the United States.