A girl quit chess for a very sad reason, and America Ferrera is not having it.

She nailed why we need more female role models. 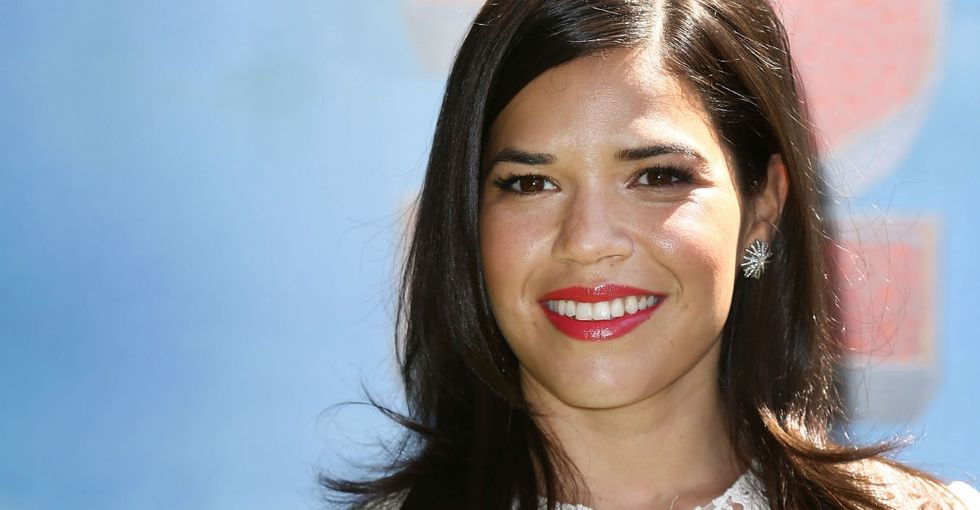 Let's get real: Actor America Ferrera is a badass.

Photo by Christopher Polk/Getty Images for The Critics' Choice Award.

When she's not batting down sexist, racist interview questions and inspiring students to let their voices be heard at the ballot box...

Ferrera chats with students in Nevada about voting. Photo by Ethan Miller/Getty Images.

Like, for instance, at the Eleanor Roosevelt Global Women’s Rights Awards, put on by the Feminist Majority Foundation on May 9, 2016, in West Hollywood.

Ferrera was one of four women honored at the event for having "contributed greatly to advancing the human rights of women and girls" across the U.S. and world.

Her acceptance speech touched on several points — most notably, the importance of role models, particularly for women and people of color:

"It’s not easy out there for most of us who don’t look like the one thing you are supposed to look like in [the entertainment] industry — to find roles that honor our intelligence and our humanity and our passion, and our real-life roles," she said, according to BuzzFeed.

Ferrera shared a personal story about a young girl whose telling experience is a tough one to forget (emphasis added):

Ferrera gets it. Because we have to do a better job at showing girls they can be whatever they want to be — not just talking the talk.

Glass ceilings still exist in far too many places (even if most have a few cracks in them). And for women of color, sometimes that glass can feel more like concrete.

Women are underrepresented in most science and math fields. They're far outnumbered in business leadership positions. The entertainment industry Ferrera touched upon? Yeah, it's overwhelmingly controlled by powerful, old white guys. And although there's a record number of women in the U.S. Senate, that figure is still inexcusably low, at just 20 out of 100 available seats.

Elizabeth Warren is one of the 20 women in the U.S. Senate. Photo by Mandel Ngan/AFP/Getty Images.

Sure, progress is happening across many of these fields but way too slowly. One recent study, for instance, found it will take another century for women to have equal representation in top positions of corporate America. (The big culprit? Gender bias.)

We have to get better at fighting back against sexism in the workplace and on our TV screens and make sure every girl knows there's a seat for her at whatever table she wants to sit at.

It shouldn't matter if it's the chess club or the White House — women should have more role models showing them that yes, they can. And it's on all of us to make it happen.

Let's take a hint from Ferrera — who'd been "a tiny Latina in California with an outsize dream that nobody really saw as possible for [her]" — and make sure every kid can see a glimpse of their best future selves in the world around them.