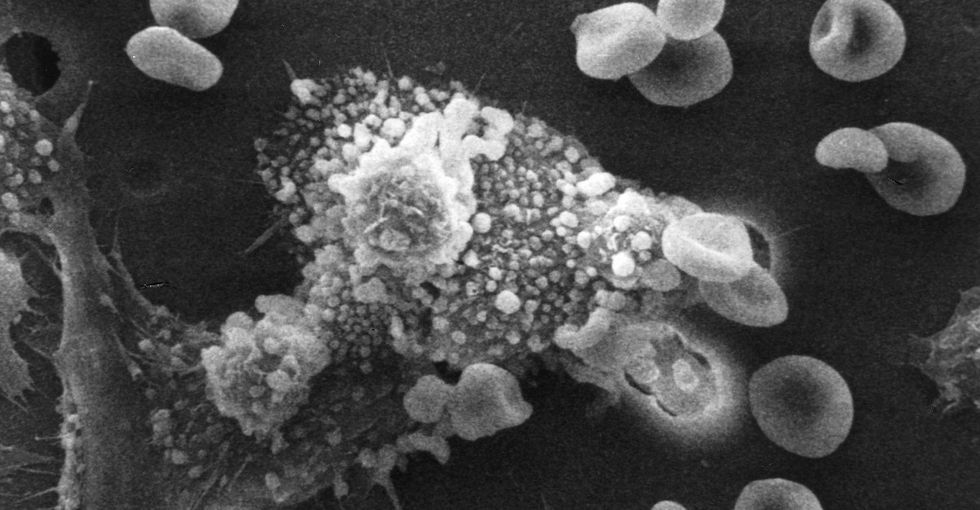 Pictured here: bees, not wasps. But you probably don't care because Nic Cage getting attacked by a swarm of anything is hilarious. GIF from "The Wicker Man."

Recent scientific research from a new study published in the Biophysical Journal suggests a certain type of wasp might be good for more than torturing Nicolas Cage.

Yep, there's evidence that an ingredient in the venom of at least one species of wasp can target, and seriously mess up, cancer cells (in a good way).

The antimicrobial peptide Polybia-MP1 (IDWKKLLDAAKQIL-NH2), or simply MP1, has unexpectedly been shown to exhibit selective inhibition against several types of cancerous cells and therefore could prove advantageous in the development of novel chemotherapies. Extracted from the Brazilian wasp Polybia paulista, MP1 has a broad spectrum of bactericidal activities against Gram-negative and Gram-positive bacteria without being hemolytic and cytotoxic.

Which means ... what, exactly?

Basically, the wasp venom chemical attacks the cell membranes of cancer cells, which exposes and, ultimately, kills them.

The best part? The compound from the wasp venom doesn't seem to harm noncancerous cells.

Many chemotherapy drugs are, at their core, basically poison. The theory goes that, while they hurt your cells, they hurt the cancer worse. It's why people often lose all their hair.

The wasp venom appears to only target cancer cells and leave normal cells alone, which is kind of amazing.

This is a good reason to make sure we don't accidentally kill all the wasps.

A wasp, chillin' on a flower. Photo by Jeff Haynes/Getty Images.

We know climate change is already wreaking havoc on bee populations all around the world, and fluctuations in temperature are leading to irregularities in wasp populations in some countries as well.

That's not great news. 'Cause despite their general unpleasantness at a picnic, it's looking like we need wasps to stick around.

The more good quality, pain-free therapy options out there, the better.