"I think the world could do with a few more women in the center of it." 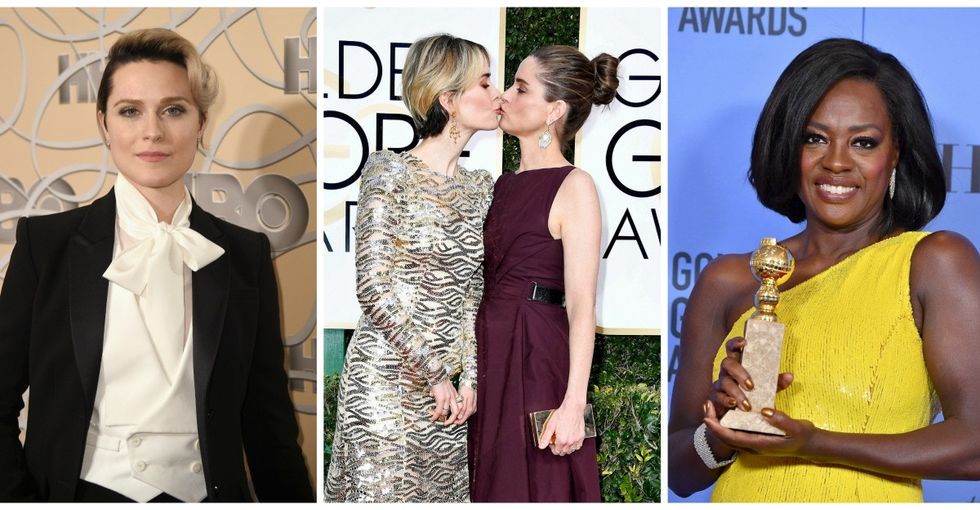 At the 74th Golden Globes, the patriarchy was smashed so many times, a sexist army of misogynistic sexists couldn't have put it back together.

A number of women received accolades for their incredible work, while also taking public stands against misogyny and bigotry over and over and over again. Well done, 2017, you're off to a not-totally-terrible start.

From same-sex kisses on the red carpet to gendered fashion statements, we've seen blips of such expression at awards shows in the past, but it's difficult to recall another award show so ripe with memorable feminist moments.

Here are nine of our favorite instances of patriarchy-smashing from the 2017 Golden Globes:

Sure, Wood isn't the first woman to sport a suit at an awards show (let's not forget the illustrious Diane Keaton), but she made the decision to wear this custom Altuzarra suit to send a powerful message to any girls watching at home.

"I decided early in the year not to wear any dresses to awards shows to be a gentle reminder to young girls and women that you're not required one if you don't want to, to really be yourself and that your worth is more than the dresses that you wear."

Sarah Paulson (who is currently in a relationship with Holland Taylor) and Amanda Peet are not dating, nor was their kiss a stunt for publicity (although it definitely received a ton). It was just the friendly way these two BFFs decided to greet each other on the red carpet.

It also wasn't the first time the friends kissed publicly, so it suggests they're simply trying to do their part to make such a loving gesture part of the norm rather than elicit the standard "OMG two women kissing" reaction.

3. Tracee Ellis Ross dedicated her award to "all the women, women of color, and colorful people whose stories, ideas, thoughts are not always considered worthy and valid and important."

Ross is the first black woman to win a Golden Globe for Best Performance by an Actress in a Television Series, Musical or Comedy, since Debbie Allen in 1983. Not to mention she's a 44-year-old black actress looking fierce and casually killing it in Hollywood. It's definitely time to check out "Blackish" on ABC if you haven't already.

There was literally nothing Davis said at the Globes that wasn't awe-inspiring. She continues to bust through glass ceilings, and she does it with power and grace.

She won Best Supporting Actress in a Motion Picture Drama for "Fences," but the highlight of the night was her epic speech honoring a fellow female giant in Hollywood: Meryl Streep.

"You make me proud to be an artist," Davis told Streep. "You make me feel that what I have in me — my body, my face, my age — is enough.”

Which brings us to...

6. Claire Foy's acceptance speech for winning Best Actress in a TV Series Drama for her role in Netflix's "The Crown."

Foy won for her portrayal of Queen Elizabeth II — a woman who ascends to the throne and quickly learns how to work within the patriarchy while also subverting it just by doing her job.

Appropriately, Foy's speech honored the Queen, but she added an important sentiment to the end saying: "I think the world could do with a few more women in the center of it."

If this Golden Globes is any indication, Foy's sentiment is well on its way to reality.

Gosling has spoken about gender equality before, but his heartfelt acknowledgement to the hard work his partner Eva Mendes did "behind the scenes" so that he could shoot Golden Globe Award-winning film "La La Land" was a wonderful reminder of what it looks like when people acknowledge the often invisible work women do.

"If [Mendes] hadn't have taken all that on so I could have this experience, it would surely be someone else up here other than me today," Gosling told the crowd. That kind of support from a partner is definitely worth shouting out.

Who says award shows aren't a time to make your political opinions known? Kirke even matched hers to her dress! She supported women's rights to do whatever they want with their own bodies by confidently sporting underarm hair on the red carpet as well as a small pin that read "F*ck Paul Ryan."

9. Octavia Spencer spoke about the importance of getting girls involved in STEM fields.

Spencer's involvement in the movie "Hidden Figures" — which tells the story of Katherine Johnson, Dorothy Vaughn, and Mary Jackson, three black women working at NASA who were integral in getting the first men into space — has been a box office success so far. That kind of turnout is great because it means a huge audience is learning about a part of history often not taught in schools.

At the Globes she told told reporters that she hopes "future STEM girls will be inspired by our movie."

Public events are always the right time to make waves for feminism and equality and to take a stand against bigotry.

The more people see these acts, the more chance they have of making a lasting impression and changing things for the better in this country. With an incoming president, cabinet, House of Representatives, and Senate brimming with people looking to strip women, people of color, and other marginalized groups of their rights, we need as many of these patriarchy-smashing moments as possible.

As long as we keep publicly standing up for what's right, whatever our race, gender, or economic status may be, those who wish to put us down will not win.