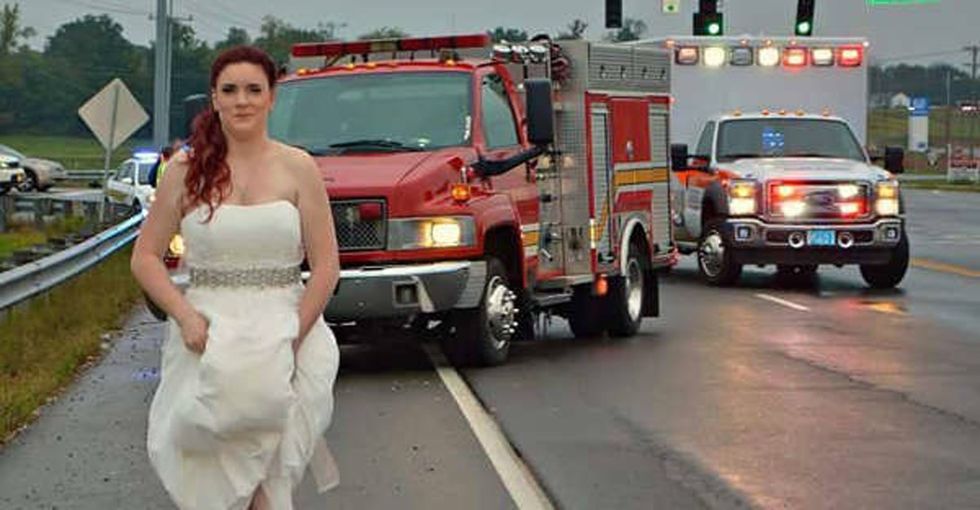 Some pretty amazing things happened. The Supreme Court legalized same sex marriage, we made incredible progress in space exploration, and yet another country eradicated polio.

But we faced some seriously difficult times, too. There were many mass shootings in the U.S., Paris suffered a terrible terrorist attack, and all around the world, girls as young as 8 years old were still being forced to marry. And like every year, 2015 was another that saw ongoing problems, like homelessness and hunger.

Mister Rogers calls them the helpers.

Actually, his mom called them the helpers, but close enough!

Sometimes the helpers are those who, in the wake of a tragedy, are quite literally saving lives. There are also the quieter helpers. The ones who are there to do what they can, long after the news cameras have gone. The ones who see serious everyday problems and know that even small gestures of compassion can make a world of difference.

Here are eight of them that I want to remember because they remind me of the good in the world and inspire me to do my part when I can, no matter how small, to help make the world a better place.

1. A California mom found a way to help Syrian refugees with young children.

By now, we've all read about the Syrian refugee crisis: Millions of people have been forced to flee Syria, leaving everything behind. They have to travel great distances, often risking death, to reach safety.

When Cristal Logothetis noticed how many refugees were carrying their babies and young children for long distances, she decided to do something about it.

She raised money and began collecting baby carriers, which she and other volunteers personally deliver to those who need them as they're traveling to safety. She called her movement Carry the Future. And as a result of that movement, refugees are better able to travel more safely and comfortably with babies and little kids.

"All they're trying to do is get to a better place and protect their family," Logothetis said in a Today interview. "Not only do they have a problem solved for them by receiving a carrier, but they realize that people care about them, that people want to help."

The day after 14 people were killed in the San Bernardino mass shooting, two Californians knew they needed to do something to help. Neurologist and president of MiNDS Network Faisal Qazi and founder of CelebrateMercy Tarek El-Messidi got together and formed Muslims United for San Bernardino. Their original goal? To raise $50,000 for the victims' families. But with the help of many people who donated money, they raised over $215,000 for the family members of those whose lives were tragically stolen.

"This united American Muslim campaign aims to reclaim our faith from extremists by responding to evil with good, by rebuilding what they destroy," El-Messidi said in a press release. "We wish to respond to evil with good, as our faith instructs us, and send a powerful message of compassion through action."

3. This Ohio pizza shop fed the hungry on Thanksgiving.

Homelessness and hunger are both big problems that many people face every single day. Over 48 million Americans are food insecure, meaning they have "limited or uncertain availability of nutritionally adequate and safe foods."

Jason Hague, owner of Bada Bing! Pizzeria, was already planning on having a Thanksgiving dinner for his friends and family. He thought: Why not invite more folks? He put out on open invitation for anyone who couldn't afford a meal to join them. Hague initially thought they'd have maybe 15 guests, but after news of their offer spread, he realized they needed to be prepared for more. His pizzeria bought enough food to feed 100 additional guests. It was just one meal on one day, but imagine how much of a difference it would make if everyone who was able helped in small ways, like donating to food banks?

4. A paramedic left in the middle of her own wedding to help the victims of an accident.

In between her wedding ceremony and reception, Sarah Ray learned that there was an accident a mile away. It turned out that her father and grandparents were involved. She and her new husband, also a paramedic, immediately left their wedding and raced to the scene, where she assisted her family members — while still rocking her wedding dress.

"This is a testament that people that work in EMS are always on duty. It is a testament to the willingness to help others," Jimmie Edwards, who is both Sarah and Paul's boss, said. True story! Thank you to the helpers who are the first responders in difficult situations.

5. Muslims raised money to rebuild Christian churches that were damaged and destroyed by fires.

In June, there was yet another terrible mass shooting that stole the lives of nine members of a black Christian church in Charleston, South Carolina. As if that wasn't awful enough, at least eight churches with black congregations were burned in the wake of the shooting, many of them as a result of suspected arson. The suspected reason for the fires started by arson was racism. The outward displays of it seemed to worsen following the mass shooting, which was racially motivated, and subsequent call to remove the confederate flag from the South Carolina statehouse.

A handful of Muslim American groups began raising money to help members of those Christian congregations rebuild their houses of worship. The Muslim groups exceeded their funding goal of $100,000 — now that's an example of people living out faith through their actions.

6. This family invited homeless people to enjoy a wedding reception dinner when the groom backed out.

When their daughter's fiancé called off the wedding at the very last minute, the Duane family from California decided not to let all that amazing food go to waste. Sure, they were sad for their daughter, but as the intended bride's mom said, "When I found out on Monday that the wedding would not be taking place, it just seemed like, of course, this would be something that we would do to give back."

As with the Ohio Pizzeria, this one-time event didn't solve hunger, but it made a difference to the guests who enjoyed salmon, tri-tip beef, gnocchi, and other delicious food. If we all used opportunities — big or small — to help the hungry, it would add up.

7. Instead of ticketing people who panhandle, the mayor of Albuquerque found a simple way to help them.

Photo by the city of Albuquerque, used with permission.

Feeding the homeless is one way to help. Offering them the opportunity to work is another. When Albuquerque mayor Richard Barry saw someone with a "will work" sign, he thought they should have the chance to do just that. His administration expanded a homeless assistance program to include work by the day. Those who accept the offer work five-and-a-half hour shifts for $9 an hour.

"We want to give the dignity of work for a day," Berry told Upworthy. "The dignity of a day's work for a day's pay is a very good thing. It helps people stabilize, it helps them with their self-confidence, and it helps them get back on their feet." At the end of each workday, the driver who transports the workers drops them off at St. Martin's Hospitality Center, which offers food, shelter, and other services.Here's hoping other cities will follow suit.

8. This couple provides a safe home for gay children who were rejected by their families.

Deb and Steve Word, observant Catholics, learned their son was gay when he was 23 years old. They asked why he didn't tell them sooner — and they learned he was worried they might not approve because of their religion.

That made the couple realize that others kids faced the same struggle — and they might not have parents who receive them with open arms, which is particularly problematic if they're still young and living at home. So they decided to open up their home to LBGT kids who needed a place to stay.

During the past six years, they've fostered a dozen such kids, many of them rejected by their own families. "[It was a] WWJD kind of thing," Deb told Upworthy. "We really just welcomed hurting kids into our spare bedrooms." It feels a whole lot bigger than that — and Deb and Steve are an amazing example of what a difference helpers can make.

I'm certain 2016 will have it's share of challenges, but here's to a new year full of the kindness and empathy in action these helpers have shown us.