3 reasons to not panic about those endangered bees, and 3 things to do instead. 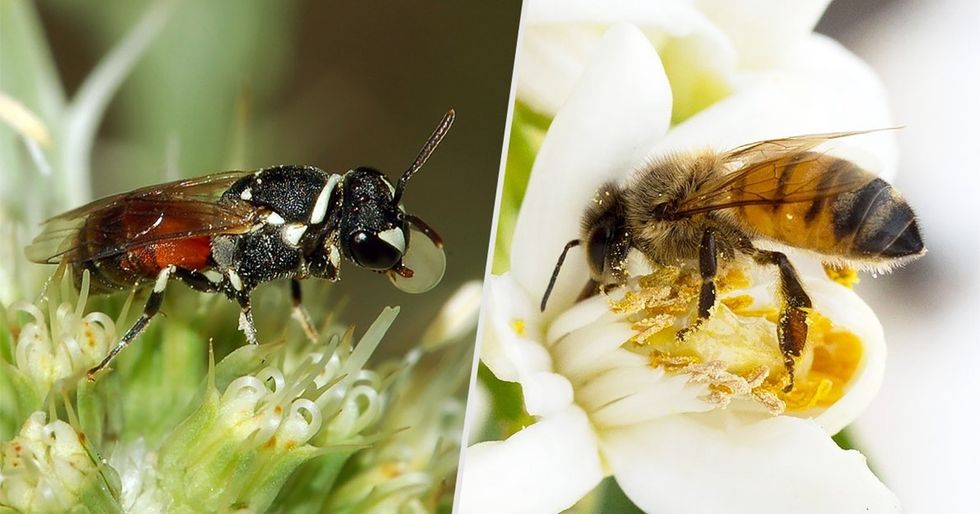 Right now, there's a report going around about how bees just got added to the endangered species list.

I know, I know: Bees on the endangered species list seems pretty awful. But the reality of that report (and our bees' futures) is a little bit more complicated than that.

When we hear "bee" and "endangered," our minds probably jump to all the things we've heard before about colony collapse and how we'll have to use robots to pollinate our apples or strawberries in the future.

But in looking at this specific report, a different story emerges. It's a story about environmentalism, protection, and preserving natural wonder. It's a story that gives me hope because in the end, the endangered species list could actually help our pollinators.

First, here are three reasons not to panic about the bees that just got added to the endangered species list:

1. The bees in this report? Not honeybees. In fact, this ruling's not really about the bees at all.

A yellow-faced bee from Germany. Photo from Fritz Geller-Grimm/Flickr.

When the title of something says "bees are in trouble," we probably assume it's about honeybees. But there are a lot of other species of bee. In fact, none of the seven species of bees put on the endangered species list is the honeybee — all seven are actually something called yellow-faced bees, which are native to Hawaii.

2. These particular Hawaiian bees are not dying from colony collapse disorder.

Instead, the scientists are more worried about their habitat.

Hawaii used to be covered in swathes of untouched forests and fields, chock-full of native flowers, plants, and primo bee habitat. But as the islands have become more urbanized, the forests and fields have gotten smaller and more fractured. What's more, invasive plants and animals like pigs, goats, and something called the yellow crazy ant...

In fact, if you look through it, colony collapse doesn't appear in the ruling anywhere.

3. Getting recognized as an endangered species comes with a ton of benefits.

Authorities can now start recovery programs, get funding for conservation, and add new habitat protections. This bee ruling could unlock protections for the entire ecosystem.

Who knew a few little bees could help protect all of this? Photo from Lukas/Wikimedia Commons.

The new protections will go into effect on Oct. 31.

Before we move on, let's actually talk about colony collapse.

Yes, we do need to do better by our honeybees. They're really important to us — they give us honey and, more importantly, help pollinate our crops.

But we are doing better. The U.S. government has created special committees to investigate colony collapse disorder — neonicotinoid pesticides seem like they might be a culprit — and the government and researchers are working to mitigate the problem. In fact, we might be seeing the bees start to recover.

So while we need to keep working, our honeybees aren't endangered yet, and things seem to be improving. That's great.

There might also be a little bonus for Hawaii's honeybees in this ruling, too.

One of the things that might be contributing to colony collapse (or just unhealthy hives in general) is the lack of species-rich, healthy forests and fields for the honeybees to eat from. So if Hawaii revitalizes its forests, nearby honeybee hives might benefit from that just as much as the native ones.

Oh, and one other little bonus for y'all: Honeybees aren't the only ones who pollinate our crops. Native pollinators like bats, butterflies, or, yes, yellow-faced bees, contribute over $3 billion to our economy every year. So making sure the whole system is healthy will give our crops their best chance at success.

In a delightful turn, it seems that this bee news isn't something to panic over. Instead, it's a sign of great progress in the conservation world.

We should be energized by these awesome new protections because the listing could unlock a whole cascade of protections to help keep Hawaii's forests healthy and happy.

And by the way, if you're feeling energized about protecting both our native pollinators and our honeybees in your own backyard, there's a whole lot you can do to help, such as planting pollinator-friendly butterfly gardens, avoiding pesticides, and supporting local ecosystem conservation. Let's get to it!