3 racial microaggressions that teachers commit every day — and how to avoid them. 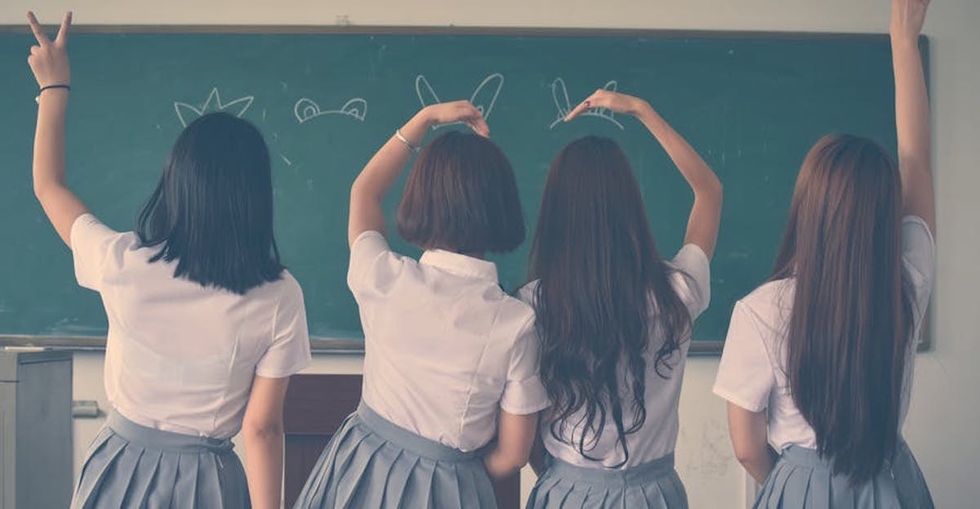 Whether private, public, or charter, everyone is familiar with the idea of the "strict" school.

Even if you didn't attend one yourself, you probably had a friend or two who complained of the inflexible rules, rigid uniform codes, and discipline for even the slightest infraction.

It's called "paternalistic," and according to David Whitman (who coined the term in this context), one of the aims of these paternalistic schools is to teach students "how to act according to what are commonly termed traditional, middle-class values."

On the surface, that can seem like a righteous goal. But what we now know is that those "traditional, middle-class" policies often can be pretty racist.

Fortunately, many schools have begun to dial back on administrative policies that attempt to refine urban students of color into middle-class white students. But beneath the surface of these more visible policy changes lies a more pressing issue — "microaggressions," or the indirect, subtle, or even unintentional ways that teachers discriminate against students of color and other marginalized student groups.

Microaggressions are small, seemingly innocuous daily decisions that can have a significant negative effect on students.

One common occasion for microaggressions is what you might call "sweating the small stuff" — teachers giving disproportionate attention to student behavior that is, yes, technically against school rules but isn't directly tied to a specific consequence or causing anyone harm.

For example, wearing hats and hoods in the school building is a behavior that is frequently punished, but not necessarily a "big deal" when it comes to actual harm caused. It's more about etiquette and an outdated understanding of what respect means.

The idea that hats worn inside a building is disrespectful has fallen out of favor in almost every venue with the exception of the schoolhouse. Today, people frequently wear hats inside movie theaters, formal concerts, churches, and virtually any other public place. Constantly insisting that students remove hats and hoods at school is a microaggression because it is premised on an antiquated view of respect and doesn't account for present-day cultural practices among communities of color.

Policing students' language is another way teachers may unintentionally commit microaggressions in the classroom.

White middle-class teachers often have a concept of what constitutes polite and acceptable classroom language, a concept that has likely not been made accessible to their students. The teacher may be the only adult in a student’s life who wishes to produce a "G-rated" environment of language. If the student was raised in an environment where swearing wasn't viewed as a transgression, it can be difficult for them to find a way to communicate emotionally and intellectually in the classroom.

Teachers should consider the intent behind each student phrase. An unengaged student may express frustration by saying, "I don’t give a shit about this class!" In this case, empathy is a more useful tool than strict discipline. The last thing this student needs is an infraction that would remove them from the classroom and further alienate them from their own learning.

Photo by US Department of Education/Flickr.

Punishing students for sleeping in class can also be a microaggression.

Again, this is an instance where empathy for the student is more useful than uncritically enforcing a school policy. White, middle class teachers may have a concept of what it means to get a good night’s rest that simply is not available to their students. A sleeping student indicates a need for rest, not a need for consequences. Sleeping students cannot learn, but they might be able to learn better after a brief nap.

Teachers shouldn't be personally offended when students fall asleep in class, because chances are, it has little to do with their teaching and much more to do with factors outside of the classroom. (That said, teachers might benefit from some self-reflection in these moments to see if lesson plans could be more engaging.) The goal should be for students to be engaged at a level where they want — and are able — to stay awake.

So what can teachers do to recognize their microaggressions and avoid committing them in the future?

Teachers should examine their motivations when enforcing rules in order to recognize their own microaggressions. Many times, our concepts of "right," "wrong," "respectful," or "disrespectful" are grounded in our own upbringing within our community — a community that may be starkly different than the ones your students occupy.

All teachers (and people generally!) have "pet peeves," but it's a good idea to examine yours to determine where they come from.

Ask things like: "Why does this behavior bother me so much?" "Will enforcing this rule help keep students safe?" "Do I disapprove of this behavior because of the way I was raised?" "Is enforcing a rule at a particular time worth the potential loss of relationship capital with the student?"

White, middle-class teachers are more equipped to educate effectively while avoiding microaggressions when they utilize what is called culturally responsive teaching. Teachers who are educated in how their students’ lives diverge from their own are better-equipped at recognizing their own implicit bias — which is the mindset on which the microaggressions feed.

Teachers must understand that deciding whether or not to "sweat the small stuff" isn't just a matter of classroom management. It's a matter of social justice.

This story originally appeared on Spoon Vision and is reprinted here with permission.