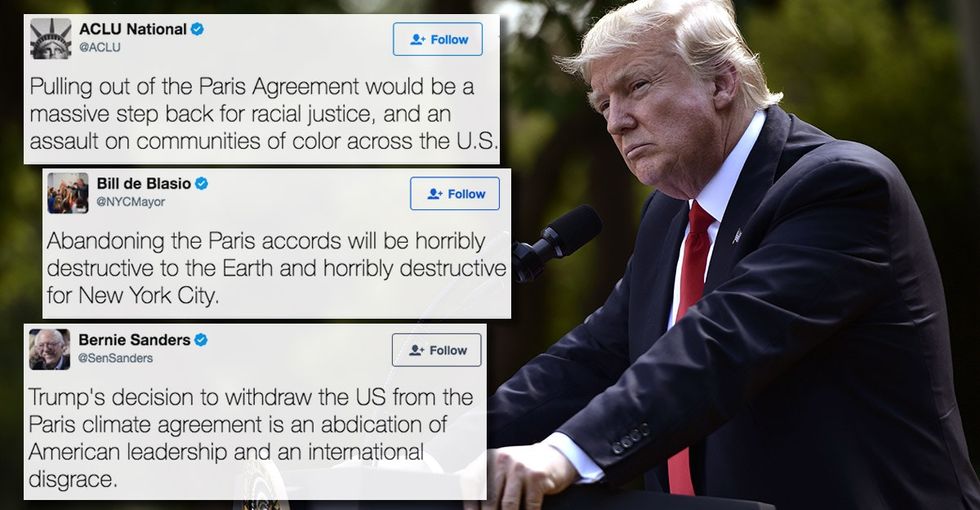 Donald Trump has announced he will pull the United States from the Paris climate accord.

The decision, which comes from an administration with virtually no science advisors, runs counter to pretty much every other industrialized country in the world and a 5-to-1 consensus among voters that we should stay in the agreement.

The Paris deal is a voluntary agreement, signed in 2015, in which 197 countries agreed to try to reduce their carbon dioxide emissions with the goal of keeping global warming under 2 degrees Celsius (3.6 degrees Fahrenheit).

Trump's decision did not go unnoticed on Twitter, where people rained down fire.

Pulling out of the Paris Agreement would be a massive step back for racial justice, and an assault on communities of color across the U.S.
— ACLU (@ACLU)1496344270.0

Multiple people covered the crowds that were gathering outside the White House.

HUGE crowd outside the White House to support the #ParisAgreement and demand #climate action. Do you hear us,… https://t.co/9lf4usegJJ
— Ben Cushing (@Ben Cushing)1496352978.0

Elon Musk, who had threatened to leave Trump's presidential council if we left Paris, jumped in:

Am departing presidential councils. Climate change is real. Leaving Paris is not good for America or the world.
— Elon Musk (@Elon Musk)1496347333.0

And Leo DiCaprio gave some advice for all who were shocked and upset by the news.

Trump will withdraw from the Paris climate deal. We mapped what his climate legacy could look like in 4 cities:… https://t.co/hY6fkXdsyN
— NYT Graphics (@NYT Graphics)1496344286.0

CNN introduced America to our illustrious new group of neighbors.

The US joins Syria and Nicaragua as one of the three countries not in the Paris climate agreement… https://t.co/D9AXtphaFi
— CNN (@CNN)1496346922.0

The only two countries that didn't sign were Nicaragua, which actually wanted to do more, and Syria, which is the middle of a civil war.

In what must have been one of Trump's proudest sound bites, he said he was elected to represent Pittsburgh, not Paris. Some people couldn't resist pointing a couple things out.

“I was elected to represent the citizens of Pittsburgh, not Paris,” says President Trump, who lost Pittsburgh. https://t.co/plj2ThDg7Q
— Matt Viser (@Matt Viser)1496347173.0

Including the city's mayor.

As the Mayor of Pittsburgh, I can assure you that we will follow the guidelines of the Paris Agreement for our peop… https://t.co/kOIEW44Odh
— bill peduto (@bill peduto)1496347422.0

Other local and state level government officials also joined in, letting the country know that they're committed to Paris, no matter what Trump says.

Both New York Mayor Bill de Blasio and New York Gov. Andrew Cuomo made sure their city and state knew they were in this for the long haul, as did Gov. Jerry Brown in California.

When climate change is already causing devastating harm, we don't have the moral right to turn our backs on efforts to preserve this planet.
— Bernie Sanders (@Bernie Sanders)1496345906.0

Barack Obama, who signed the agreement back in 2015, called on everyone to do their part.

"I'm confident that our states, cities, and businesses will step up and do even more to lead the way," the former president wrote.

The message is clear. This was a dumb move, but the Paris agreement — and the hopes and drive behind it — will survive.

The European Union and China as well as numerous American states and cities have all vowed to abide by the plan's regulations, no matter what Trump does on a federal level. The fact is, the U.S. is already shifting to cleaner fuels and renewables, and solar power now employs more people than coal.

Plus, the Paris climate deal is scheduled to come into force on Nov. 4, 2020. Coincidentally, right after the next Election Day.