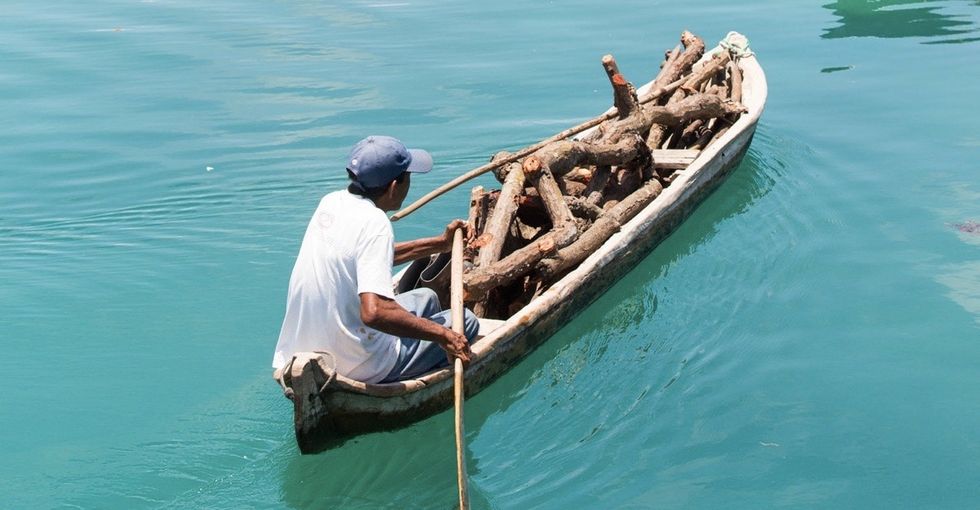 Looking out to the Caribbean. All photos from Greta Rybus, used with permission.

She wanted to go because of a weird reason: Many of the people who lived on these islands were making preparations to leave them.

As the island's population has grown, living spaces have become crowded. Worse, climate change is creeping into daily life, affecting everything from rainfall to fish numbers.

Rybus stayed there for a month, spending most of her nights camping on an uninhabited island. During the day, she photographed the islanders, who told her their thoughts and stories.

She visited two small island communities — one called Gardi Subdub and a more remote island called Coetupu. The islands are home to about 900 people each. This is what Rybus saw and what the people there had to say about their changing way of life:

“As children, we learned through songs," said Joanna Robinson, who lives on Coetupu.

A family house in Coetupu.

"These days, there’s only few people in the community who sing the old songs. My Aunt Rosa was told a lot of knowledge when she was young, so now she can teach and sing to the young girls. We sing things like: 'When you grow up, you’ll help your mother, and you’ll see papa when he comes back home from the mountain.'”

Naidi Robinson also remembered growing up and learning through song.

"When I was a little girl, I loved to go to our farm on the mainland and learn about how to plant things," she said.

Climbing one of Coetupu's trees.

“I spent many good times planting things, harvesting mangoes. It is a Guna tradition to teach these things," Naidi said. "As children we are taught to plant things, especially boys. Mostly it’s men who plant trees, and we women go to help and pick things. They plant trees to be healthy, to give us food."

Leonidas Perez, a tribal leader from Coetupu, has watched how things have changed: "The sea can't heal the way it used to."

Perez in his home on Coetupu.

Perez is a saila, or tribal congressman, which means he's one of the people responsible for making decisions for the community.

"In the past, they used to catch a lot of fish," said Perez. "Nowadays, there is not much fish. And before, there were a lot of coconuts and bananas. But not now, because of the changes with the sun. And it used to rain like for about a week long. Now, if it rains, it rains only one hour and then it stops.”

"We are alive thanks to the rain," said Joanna.

People have to travel to other islands to get fresh water.

Changing weather patterns have made it harder for the community to get fresh water.

“We have more and more problems with water. It’s getting worse," she said. "We have always gotten water from rivers on the mainland. Now the rivers have dried up because of the lack of rain. Every five days, we have to go to another island to get water from their community water source."

Jugs are used to store and transport the water.

But rain isn't the only thing the islands are struggling with.

“Parts of the island that normally didn’t flood are often covered in water," said Asterio Ramirez, a teacher in Coetupu.

Rising waters are threatening to flood parts of Coetupu.

For an island struggling to get enough drinkable water, rising sea levels must seem like a cruel joke. As sea levels rise, salt water has begun to inundate low-lying areas. This can be a problem, since it means potential flooding, polluted drinking water, and drying plants.

On Coetupu, they're planning to build a bridge to another nearby island.

On Gardi Subdub, they're planning to leave entirely.

"We, the community, have to be prepared for a new life on the mainland," said Ascanio Martinez, a health educator in Gardi Subdub.

The construction site at Nueva Barria.

Gardi Subdub has started building a new community on the mainland, which they're calling the Nueva Barria. So far, there's a community center and a half-completed health center. Soon they'll start building the houses.

Rybus says she wasn't sure whether everyone on Gardi Subdub would move to the new community, or just some.

"Young people, they are going to suffer the consequences," said Guillermo Archibold.

Boys playing on the docks of an island near Gardi Subdub. Traders from the mainland bring goods for sale.

Archibold is an agronomist from Gardi Subdub. "Governments, politicians, big countries should think about the relationship between people, not only indigenous people but all around the world," he said.

"The problem is that as long as the social system doesn’t change, we will continue to have problems. The rich countries only work to [get] more and more money, and they want to dominate. There’s no equality. Poor countries are becoming even poorer. The system has to change. The resources, the wealth that God created, only few are taking advantage of it and only a few are protecting it."

After a month living with and photographing these communities, Rybus headed back home to the United States to share these stories of how climate change is affecting real people.

Rybus has said that she wants to visit more small communities and learn how their lives are changing in response to climate change. She's already done one series of shoots in Senegal, on the west coast of Africa.

"I really hope that people will start to understand climate change as a human rights issue or a human issue, rather than just an environmental issue," says Rybus.

It's going to affect people's health, security, migration, even what foods they eat. But part of what photographers do, says Rybus, is try to show people a different point of view. "You just keep doing your best to share that, those different perspectives."