What chimps understand about keeping secrets that Donald Trump doesn't. 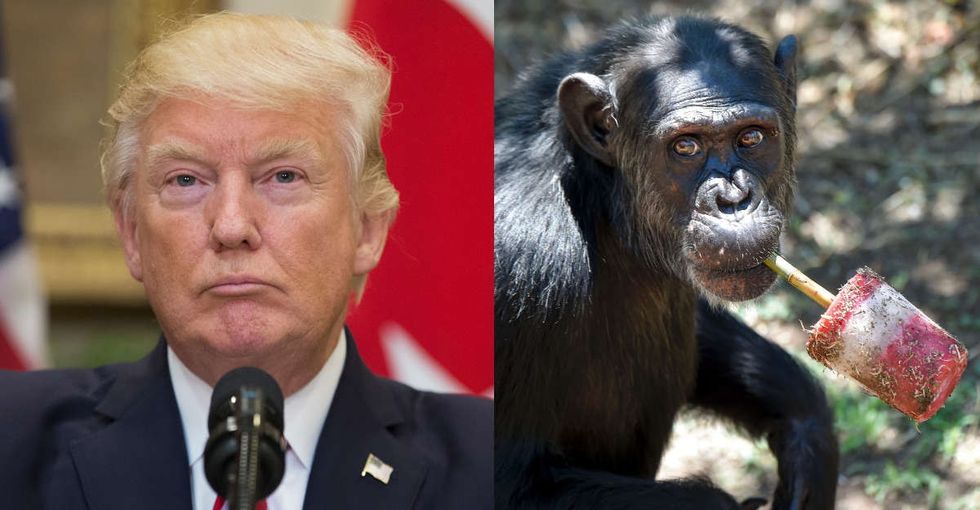 Recently, we learned that President Trump is not very good at keeping secrets.

According to a bombshell Washington Post report, in the course of bragging about how cool his job is, the president revealed highly classified "code word" intelligence to Russian officials visiting the White House.

Most people would know not to do this.

In fact, you probably wouldn't even need to be a person in the White House to keep America's national security secrets safe. A reasonably competent nonverbal mammal could probably pull it off — and an animal president would come with a lot of advantages. No Twitter! No press conferences! We could pay them in food!

I wanted answers. More importantly, I wanted a Plan B for America.

Is there an animal that would be better at keeping secrets than the current president of the United States? And how quickly could John Roberts make that animal swear on a Bible?

According to a 2015 study, chimpanzees can actually determine who it's important to hide information from.

Researcher Katja Karg of the Max Planck Institute for Evolutionary Anthropology in Leipzig, Germany, discovered that the great apes are able to identify individuals seeking to do them harm, and they are cautious enough to conceal information from them accordingly.

"Chimpanzees understand others' intentions, and they can adjust their behaviour to these intentions by flexibly manipulating what they make visible to others," lead researcher Karg told the BBC in 2015.

They discovered the chimps were more likely to keep food hidden in the presence of competitors and not say, for example, "Hey, we've got great food. The best food. The most delicious chocolate cake you've ever seen. Let me show you exactly where it is."

The experiment concluded that the chimps are able to selectively, intentionally deceive — and not just because they don't talk.

The key to chimpanzees' ability to keep secrets? They are able to distinguish between friend and foe on a very basic level.

Like, for example, the difference between the leader of an allied and long-term partner nation...

...and a couple of guys who (probably) lied about the reason they brought cameras into your office.

Once the chimps make the distinction between friend and foe, they are able to adjust their strategy — hiding resources from individuals out to get them, while sharing with those who are friendly.

Which raises the question: Is it time to oust Trump and install a great ape in the Oval Office?

Not so fast, it turns out.

"They are not very good at [keeping secrets]," Karg told the BBC, of her chimps' performance in the experiment. "You can help them by giving them some way to distract themselves."

In some ways, perhaps they're not so different from our current president after all.

That said, what would be the harm in giving Mr. Bananas a few weeks to call the shots?

Could things really get any weirder than they already are?