These remarkable floating farms could help feed hungry people around the world. 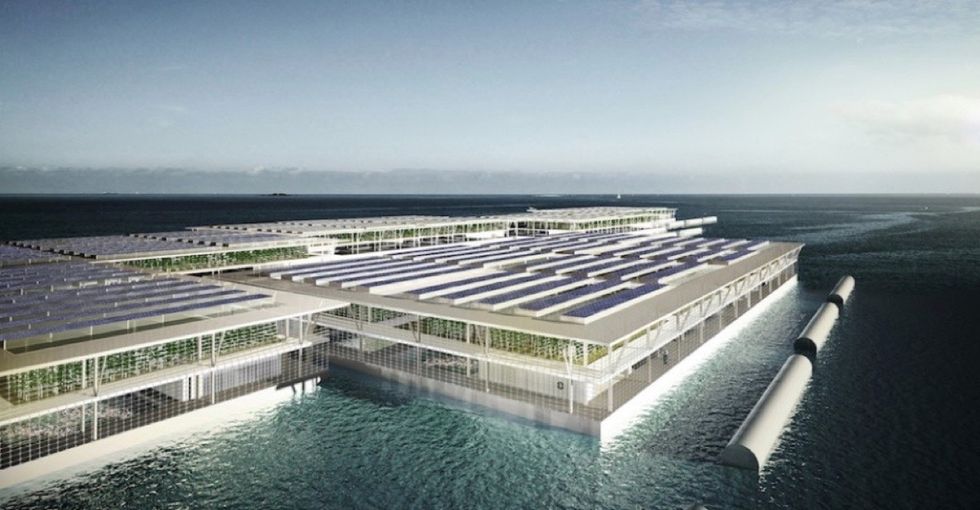 Food. It's easy to love.

GIF from "Malcolm in the Middle."

But the harsh reality across the globe is that many people don't have access to the food they need.

Approximately 795 million people in the world don't have enough food to lead a healthy, active lifestyle, according to an estimate by the World Food Programme. And the global population could go from 7.2 billion to 9.6 billion by 2050.

The growth in population could mean less space to farm, too. BASF Crop Protection, one of the world's largest producers of farming-related chemicals, estimates that between 2005 and 2030, the amount of arable land available per capita will shrink by almost 20%.

Not enough space to grow on land? Here's another idea: Plant food in seas, lakes, and rivers.

Forward Thinking Architecture, a firm in Spain, is one of the companies working to build farms directly in bodies of water through a project they call "Smart Floating Farms."

Here are three ways these hydroponic farms could reshape the future of farming:

1. They could open up a lot of space for farming

In places like Singapore, land is hard to come by. Roughly 5.5 million people live in the island city.

Considering Singapore measures approximately 277 square miles, that means about 20,000 people inhabit the city for every square mile of available space. That doesn't leave much room for farming.

The good news is that this cutting-edge smart floating farm technology is scalable and replicable, which means that as the world's needs grow, so too can production levels.

A three-level floating farm, complete with inflated cylinders in front that protect against waves. Photo via Smart Floating Farms, used with permission.

According to the firm, 25 of the world's 35 largest cities (New York being one of them) have nearby access to bodies of water, so these farms could theoretically be built to serve metro areas around the world.

These water-based farms don't need soil to grow plants. They would use water that is already infused with vitamins and minerals, a process known as hydroponics. Of course, the plants couldn't survive on saltwater — freshwater would be pumped into the grow facility and then sprayed evenly on plants through a mechanical system.

According to the plan, the entire farming system would be built in three levels on huge barge-like containers, with the first level housing a solar-powered energy facility and the second level using that energy to grow crops (no soil required). On the third level, you could raise fish, which would survive on the waste products from the farm.

The solar panels on the top level of a floating farm. Photo via Smart Floating Farms, used with permission.

This top to bottom system allows the sun to be used for energy, crops to grow without being harmed by saltwater, and fish to be fed and farmed. Genius!

3. They are cost effective and greener

If these farms were built near major cities, it would cost less to transport food to grocery stores. A self-sustaining ecosystem could also mean less maintenance and lower manufacturing costs, too.

And even though these techniques would be used in bodies of water, they can be applied in the air, too. Singapore-based company Sky Greens builds skyscrapers filled with plants that rotate up and down between water and sunlight, allowing vegetation to be grown 10 times more effectively than traditional forms of agriculture would allow. As a result, food is cheaper, more accessible, and more abundant.

It's a produce party in the sky. Photo via iStock.

There's hope for the future.

These types of innovations have the potential to help regions around the world cope with the need for more food, even if they have less space.

Here's a video from Forward Thinking Architecture explaining the concept of floating farms:

This bit of ingenuity and creative thinking could help ensure that people around the world have plentiful, sustainable food sources.