These kids are using technology to turn their prosthetics into a superhero's dream. 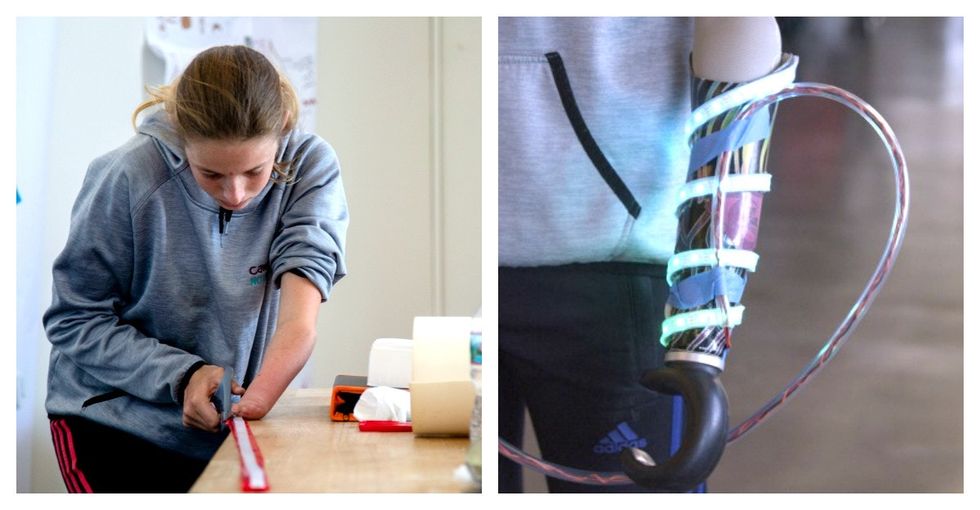 If you could give yourself a superpower or a superhero-style gadget, what would it be?

I always say I'd want to be a shapeshifter or have a car that could shape-shift à la the Batmobile because I like pretending to be other things.

It's a fun question to ask friends because it gets everyone to think outside the box and have a good time being creative.

Now consider this: What if you could take those ideas and actually make them functional? (Who else's inner comic nerd just perked up?)

That's the idea behind Superhero Boost — a weeklong workshop where disabled kids get to create their own superpowers in the form of wearable devices.

One kid's light-up prosthetic. All photos by Autodesk/Blue Bergen, except where noted, used with permission.

The workshop was launched in 2014 by Kate Ganim and has since turned into an intensive series of workshops that help kids harness their inner designer and/or engineer.

"We aim to create a space for kids to celebrate the bodies that they're in and to re-think their disability as a super-ability," writes Ganim in an email.

However, she stresses that it's not about trying to "fix" these kids. Many of them were born without a limb or part of a limb; because those were never there in the first place, the kids don't feel like they're missing anything. Instead, it's about helping them create something cool and unique that they're proud to show off.

"Why does it have to be a hand, when it could be literally anything and it could do things that a natural hand isn't able to do?" asks Ganim.

What's more, the kids get to make their body modification using state-of-the-art technology like 3D modeling, robotics, and Google artificial intelligence technology — with the help of trained experts, of course.

Since 15-year-old Sydney's a competitive BMX rider, she updated her arm prosthetic so that it lights up to intimidate competitors.

This was her second year doing the workshop, and since she's now quite proficient in 3D printing, she was asked to be a mentor as well as an inventor during the June Superhero Boost workshop in San Francisco.

"The thing that I like as a parent is that they want kids to think on their own and be themselves," says Audrey, Sydney's mom.

Sydney's currently ranked seventh in her state in her age group for BMX, and her handle bar was custom made to support her prosthetic, so she wanted to make it stand out in a major way. When she learned Google engineers were going to be at the workshop teaching kids how to incorporate AI, she knew that had to be part of her design.

Thanks to help from Google engineers and staff from both Superhero Boost and Autodesk, the company that held the workshop and offered up their plethora of tech tools, she got her modification to work by the end of the week.

"The [engineers] are like little kids," remarks Sydney. "It's quite fun. They get so excited."

Meanwhile, 16-year-old Kenzie created something entirely different — a robotic arm sleeve with a glowing gem that even Iron Man would envy.

Kenzie actually came up with the idea at a one-day workshop she did with Superhero Boost in Boston, near her hometown, but she really got to flesh it out during the most recent weeklong workshop in San Francisco.

While in the end, it wasn't totally what she'd envisioned, it still looked pretty darn cool.

"I was like, 'It's going to have to shoot something or do something,'" says Kenzie. "It ended up just lighting up. It did a thing — not a fantastic thing — but it did something."

She devised the whole modification on the computer in something called Tinkercad, a computer-aided design (CAD) program that allows you to 3D print your creations. Kenzie had to do some futzing with the voice control aspect of the project, which initially failed to function correctly, but eventually she and her engineer helper figured it out.

This experience is about much more than making awesome gadgets, though: It's also helping these kids see that they really can do anything they set their minds to with technology at their disposal.

Kenzie and Sydney working at the Superhero Boost workshop.

For example, Kenzie was blown away by a wheelchair booster that her friend Anaiss made — it literally lifts her wheelchair higher, which is not only super cool, but also legitimately useful.

These kids are also taking skills with them that will likely be instrumental in whatever career they end up choosing.

Kenzie, for one, is looking to go into toy design, and thanks to the workshop, she's already connecting the dots to that dream. "One lady at the end was talking about how she's going to be working on this augmented reality project, and that she wanted to work with me on that," she says.

What's more, everyone who participated gets to keep working with a professional designer on their prototypes to make them as cool as they can be.

But while all these tools are great, the real superpowers come from the kids themselves.

The kids from the most recent Superhero Boost workshop.

"By nature, these kids are incredibly creative and determined," writes Gamin. "They're having to adapt every day to an environment that was not designed for them, and it's on them to figure out how to adapt."

However, since the most formidable beings are the most adaptable, there's no doubt these kids are going to be unstoppable.