These 5 bafflingly weird old maps of the Arctic show why it's worth preserving. 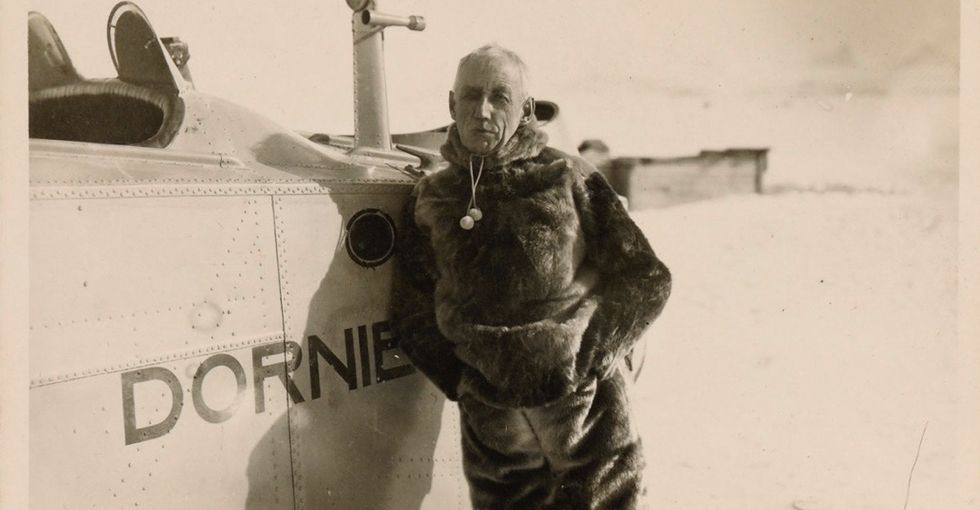 The North Pole was once one of the most inaccessible places on Earth.

Ships trying to sail anywhere near it risked getting permanently frozen in its vast, icy prison.

Going on an expedition meant being at sea for at least a few months (maybe even years) and battling horrible cold, wind, snow, and ice, not to mention starvation. Not everyone who set out made it home again; whole expeditions sometimes just ... disappeared.

The crossing was so intense that humans actually reached the South Pole first. It really says a lot when Antarctica is the easier of your two options.

The first verified expedition to the North Pole didn't happen until 1926.

Though U.S. Navy engineer Robert Peary claimed to have made it to the pole in 1909, the first verified, undisputed claim to that achievement didn't happen until Norwegian explorer Roald Amundsen flew over it in an airship in 1926.

Amundsen's team had also been the first to reach the South Pole, which I'm pretty sure means he owns the Earth now.

Before Mr. Roald "Fur Coat" Amundsen, however, mapmakers had been trying to guess what the Arctic looked like for centuries.

See the stone thing in the center and the four islands surrounding the North Pole in this map from 1595?

The red, green, and yellow blobs around the edges are Canada, Europe, and Asia, respectively. The blobs in the middle are ... Mordor? Image from Gerardus Mercator/Wikimedia Commons.

Those are there because mapmaker Gerardus Mercator seemed to think there might be some sort of lost world up there.

By the late 1600s, mapmakers had a better idea of what the pole looked like, but Greenland and Canada still seemed to cause some conundrums.

Like, I'm pretty sure Greenland and Canada don't actually connect to each other.

And this mapmaker in 1720 seems to have admitted ignorance, shrugged his shoulders, and just stopped drawing.

Some maps, like this one from 1762, made some ... interesting guesses at what the North Pole looks like.

And "What if I put a big ol' sea here in the middle of what will one day be Seattle and British Columbia?"

I'm pretty sure I'd remember if Seattle were in the middle of a giant bay. Image from Jean Lattre/Wikimedia Commons.

Even years later, in 1776, Alaska was still proving troublesome to mapmakers.

By the 1880s, at least, we knew more or less what was at the North Pole (nothing but water and ice).

Although this map still has a few blank places at the very top of Greenland and Canada.

Those Aleutian Islands look a little short, too. An 1882 map. Image from the New York Public Library.

Thanks to those explorers and technology, we now know that the Arctic looks like this:

But — would those explorers of a century ago, the ones who spent months and years traversing its icy waters, even recognize the place if they saw it today?

In a recent interview, oceanographer Peter Wadhams told The Independent that the Arctic may be on track to be ice-free for the first time in 100,000 years.

Climate change has been consistently reducing the sea ice around the Arctic Ocean for decades, to the extent that the same passages and channels that once baffled and trapped early explorers are now so ice-free that they're being considered for use as shipping lanes.

In late 2015, the Russian icebreaker Vaygach completed a trip along the north coast of Siberia in just seven and a half days. Image from Dudinka_Apu/Wikimedia Commons.

Our maps may be a lot better now, but that doesn't mean we should abandon the Arctic's air of mystery and adventure.

After all, it's still home to seals that look like something out of a Tim Burton film...

...not to mention weird methane that seeps from deep in the seabed and these fire-breathing lakes. So even though we now know where we're going when it comes to the North Pole, there's still plenty up there left to discover.

Last year, 174 countries pledged to help fight climate change at the COP21 climate change conference in Paris. Individual people can help, too, by reducing their energy consumption and not only voting for politicians who don't think climate change is a hoax, but making sure they stick to their agreements after they're in office.

If we can accomplish that, we can keep the Arctic cold — and help preserve for future generations the air of mystery and adventure that those old (admittedly faulty) maps embody.