There are blind doctors, lawyers, and athletes. It's time more workplaces caught up.

If the first thing you think of when you hear 'blind person' is all the things they can't do, this campaign is for you. 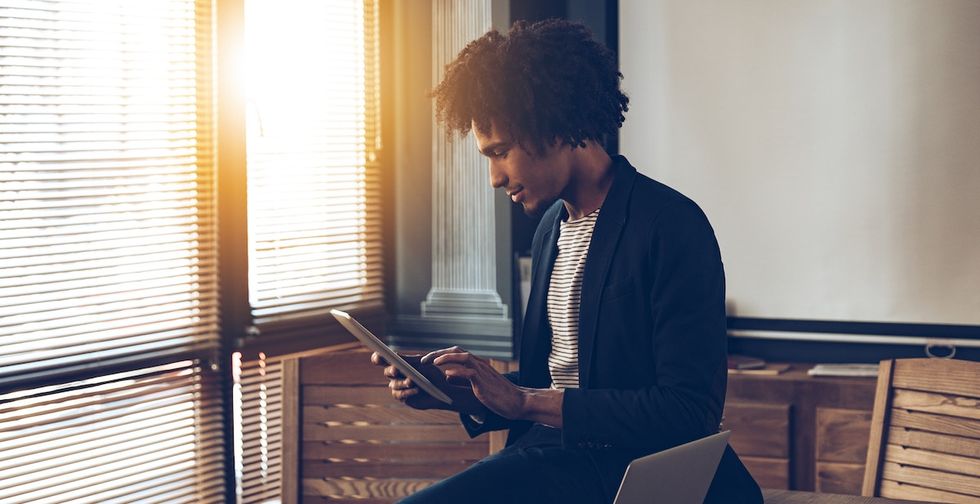 True
Perkins School for the Blind

There are more than 23 million people who are blind or have experienced vision loss in the United States and Canada.

They are doctors, lawyers, and professional athletes. They're actors, writers, and daredevils. They love skiing, dancing, and watching movies.

Check out this moving video about ways that blind or visually-impaired people are challenging misconceptions:

There's also an audio-described version of the video here.

While being blind or vision-impaired has little bearing on people's ability to do many jobs, it does affect their ability to get a job in the first place.

Fred LeBlanc knows this all too well.

LeBlanc is the star of a PSA created by the Canadian National Institute for the Blind (CNIB). After 29 years working as a firefighter, he began to lose his sight in 2011. A diagnosis of legal blindness followed soon after. In an interview with the CNIB, he talked about how his diagnosis made him doubt his abilities to remain in the workforce:

"I questioned myself. If I struggled with everyday tasks, how was I going to lead a fulfilling career?”

With the support of the CNIB and other blind workers, LeBlanc found his confidence. He decided to run for the position of 13th District vice president with the International Association of Fire Fighters, a job he still holds.

"I thought 'why can’t I do what I set out to do?' I had to tell myself 'don’t be silly, this is not your fault, there’s nothing to be ashamed of,'" he told CNIB.

‌There's plenty of room at the table for blind workers — as long as we give them the chance. Image via iStock. ‌

In Canada, about 60% of people of working age are employed. That number drops to just 32% for the visually-impaired. Similarly, according to the latest data from the U.S. Bureau of Labour Statistics, only about a third of working-age Americans with visual impairments or blindness were employed in September 2016.

Diane Bergeron, the executive director of CNIB, says that's not for lack of trying. In an interview with the Toronto Star last month, she relayed her frustrations, saying, "We go out, we get an education and then we come out of education and when we want a job there’s no job to be had."

According to the CNIB, creating a workplace that is inclusive and welcoming for blind and sighted workers isn't as daunting as it might seem.

‌A man reads on his tablet. Substituting printed correspondence for digital is one easy way to make a workplace more accommodating for people who are visually-impaired. Image via iStock. ‌

Jim Lee, Chief of Staff to the General President, International Association of Fire Fighters, is Fred LeBlanc's boss at the IAFF. For him, working with Fred is a mind-opening experience.

Prior to working with LeBlanc, Lee had no experience interacting with someone who is blind or partially sighted. Lee quickly saw firsthand that LeBlanc's abilities didn't change, even though his vision did. "Unless he tells you, you wouldn't know that Fred has vision loss," Lee told the CNIB. "His abilities didn't change at all."

To accommodate his colleague's vision loss, Lee and his team made minor adjustments to their workplace. Rather than printing hard copies, they focus on email correspondence. Documents use an off-white background to provide easier visual contrast.

Realizing how little things needed to change helped Lee understand that vision impairment doesn't mean workers needed to exit or stay out of the workforce.

"People with visual impairments have a lot to offer," said LeBlanc. "They just need the opportunity to prove that. Employers have to give them a chance to come in and show what they can do. A lot of employers would be amazed."

It would be easy to tell a story about blindness that focuses on depressing statistics around working or employment. After all, there are a lot.

‌A doctor and a patient look at a computer screen. A more inclusive workplace benefits everyone. Image via iStock. ‌

But the real power is in flipping that story to one of empowerment. Whether they choose to become athletes, artists, or professionals, individuals who are blind can and do lead rich, fulfilling lives, like anyone else. It's time to elevate the work experiences of people like Fred LeBlanc and remind everyone that blind workers can thrive in whatever career they desire — when employers give them the chance.