The skies just got a little friendlier with these two history-making pilots. 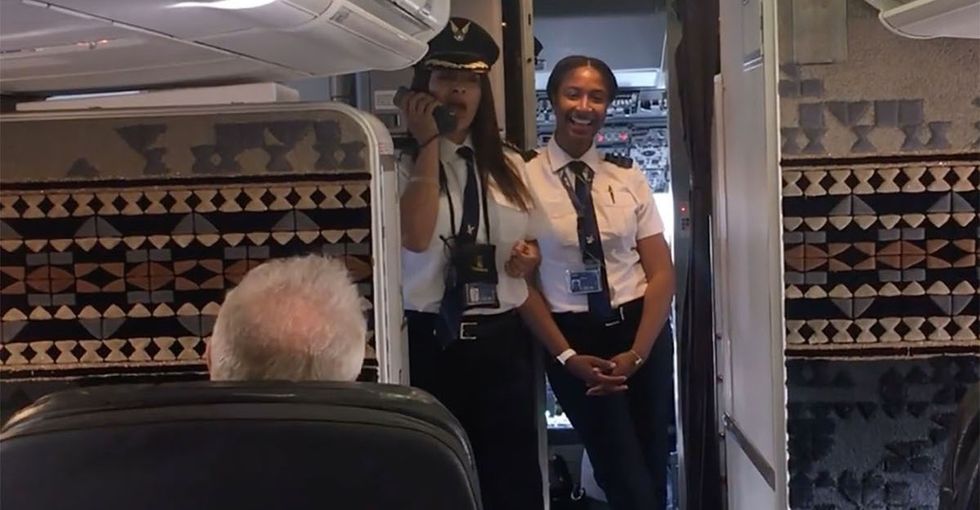 This month, the friendly skies became even friendlier when Alaska Airlines made pretty awesome history.

After American Airlines Captain Tara Dillon-Wright joked with passengers about Mother's Day and other fun tidbits, she introduced her teammate, 1st Officer Mallory Cave, along with the amazing news.

Making Alaska Airlines history this morning! First Officer Mallory Cave and I serve as the very first all African-American female crew on Alaska Flt #361, San Francisco to Portland, OR. 👩🏽‍✈️👩🏽‍✈️

For the first time in the airline's history, the plane would be piloted by two black female pilots.

"Finally, you're sharing a pretty interesting piece of Alaska Airlines history this morning," she told passengers in the video. "You'll be piloted by two female African-American pilots for the first time in the airline's history."

The passengers of the Alaska Airlines Boeing 737 Flight #361, flying from San Francisco to Portland, burst into applause. Because really, who doesn't want to enjoy beautiful skies while being flown by awesome, history-making women?

The flight marks a much-needed change in the airline industry.

According to the U.S. Bureau of Labor Statistics, more than 72% of air transportation employees are white and 60% are male.

Overall, a whopping 97%% of aircraft pilots are white, with female pilots making up a mere 5%. One study found that found that desegregation in airline flight decks hasn't progressed since 1980. Black pilots at a number of airlines have talked about the discrimination they've experienced, and women have also faced discrimination and harassment in the industry.

The disparity is frustrating, but Dillion-Wright and Cave's accomplishment shows that change is coming.

In spite of what the numbers say, women continue to make it clear that male-dominated industries are no longer "boys clubs."

In the 1920s, Bessie Coleman became the first African-American woman to hold a pilot's license. Her progress was inspiration for women around the world who wanted to work in male-dominated industries. Take, for instance, former Navy fighter pilot Tammie Jo Shults, who made an incredible life-saving emergency landing after debris from an engine failure broke open a plane window. Or Clara Lyde, Lauren Plagainos, and Wendy Tapia, all three of whom joined the Fire Department of New York, one of the most notoriously competitive fire departments in the country.

These women and countless others are showing us that they are not only good enough to be in these industries, they belong there.

Though we're far from equal racial and gender breakdowns in numerous career fields, many women are doing the work to get us there.

With leaders like Dillon-Wright and Cave, it's clear that we're getting even closer.