'The SHU' is a place where prisoners might be sent, and it can actually drive them insane. 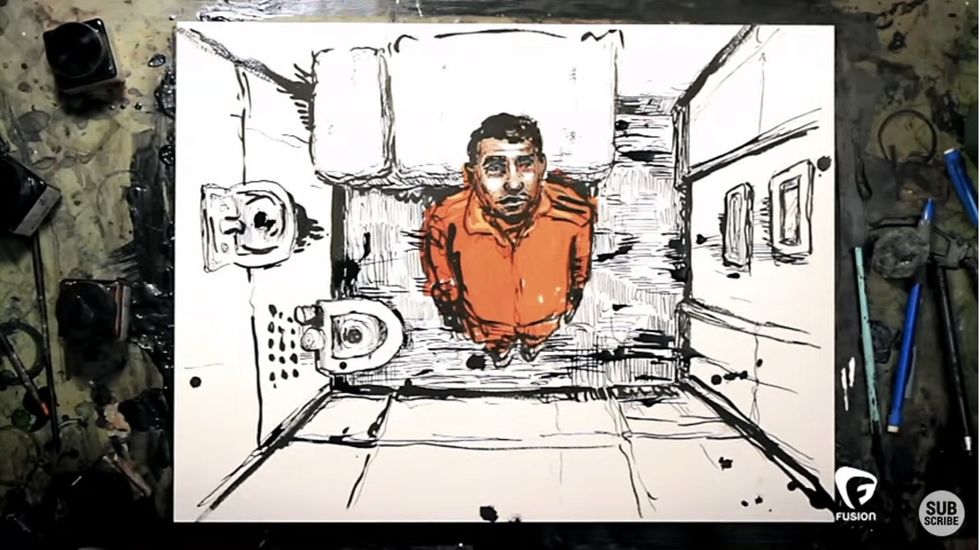 According to the UN, solitary confinement for 15 days or more is considered torture that can cause permanent psychological damage.

But prisons in the United States still use these "Special Housing Units," aka "SHU," aka the "Shoe."

Some, like Pelican Bay Prison in California, keep over one-third of inmates in solitary. Up until last year, Rikers prison in New York would even put 16- and 17-year-old children in solitary (though they euphemistically renamed it "punitive segregation"). They were forced to change that policy.

The estimated number of people in solitary confinement right now in the United States. Image via Fusion/YouTube.

As brought out in the video below, solitary confinement usually means spending between 22 and 24 hours a day alone in your cell. A concrete slab with a thin mattress is your bed, and perhaps three times a week, guards shackle you for a 15-minute shower. The only exercise you get is pacing around another concrete box that, if you're lucky, might have an uncovered ceiling. Because that's the only way you'll see the sky.

In 2013, 30,000 California prisoners went on a hunger strike to protest the use of solitary confinement.

It got people talking and brought attention to the problem.

One of the biggest concerns (in addition to that whole torture thing) is that the reasons inmates are sent to solitary confinement can be pretty arbitrary and subjective.

Some women have even been sent to solitary for reporting rape by prison guards — for their "safety." Ahem.

Just some of the reasons an inmate might go to the "Shoe." Image via Fusion/YouTube.

There are some inmates who have spent decades in solitary.

People like William Blake, who has been in a solitary cell at a New York State prison since 1988.

"Set me afire, pummel and bludgeon me, cut me to bits, stab me, shoot me, do what you will in the worst of ways, but none of it could come close to making me feel things as cumulatively horrifying as what I've experienced through my years in solitary. Dying couldn't take but a short time if you or the State were to kill me; in SHU I have died a thousand internal deaths." — William Blake, inmate

The clip below gets to the heart of it, with help from illustrator Molly Crabapple.