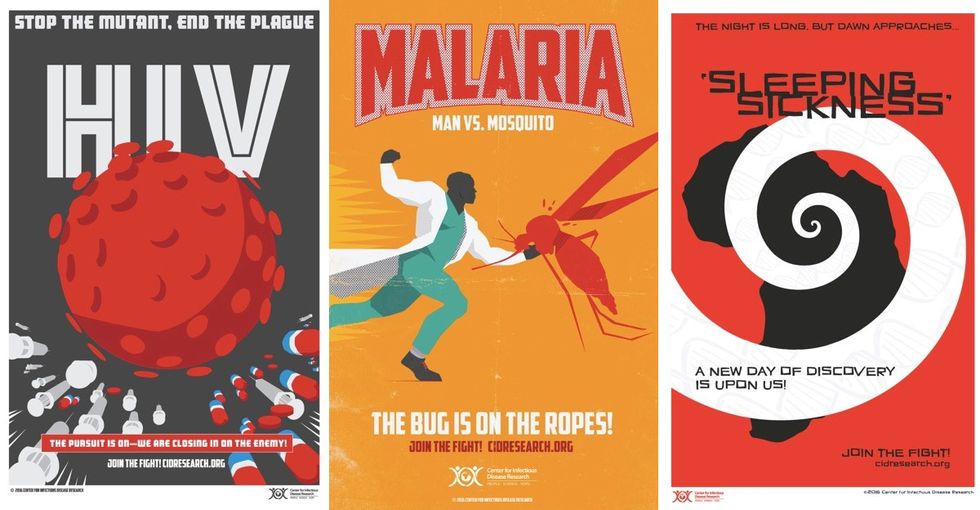 I know that might sound kind of weird. We don't often hear the words "infectious disease" and immediately feel all excited and hopeful. But we're actually making tremendous, tangible, changing-someone's-life progress every day.

"The more time you spend with folks working in the field, the more optimistic you become," said Trevor DeWitt, who works at the Center for Infectious Disease Research (CIDR), a research institute headquartered in Seattle.

In fact, the fight is looking so strong that the scientists at the CIDR decided to illustrate their battles in the style of epic movies.

Inspired by the fight against disease — as well as comics and classic movies — the center teamed up with a creative partner to created four colorful posters that capture the field's passion and optimism.

The posters help show how, though we laypeople might think of studying infectious disease as a never-ending, depressing slog through test tubes, microscopes, and hospital sick bays, this fight is actually every bit as exciting as any epic movie battle scene.

Oh, by the way, this optimism isn't just horsefeathers.

Because while HIV (the virus that causes AIDS) once seemed insurmountable, today better education, better prevention, and new, better antiviral medications are putting this disease on the run. We may even see a HIV vaccine in the near future!

Over 3 billion people are at risk of contracting malaria, which is a parasitic infection carried by mosquitoes. That might seem too big to fight, but actually, in the last 15 years, our hard work has been able to drop incidence rates by 37% and death rates by 60%!

Tuberculosis is a bacterial disease that often attacks the lungs. It killed about 1.5 million people in 2014. That's a lot, but the World Health Organization has set a goal to eliminate 90% of infections by 2035, and with international support and a suite of powerful antibiotics, we might be able to pull it off!

Sleeping sickness is a parasitic infection carried by tsetse flies, which are found in sub-Saharan Africa. Thanks to sustained control efforts, cases have been steadily dropping — between 2000 and 2013, the new-case infection rate dropped 73%!

This fight is proof that when we all join forces, there's very little we can't do.

"The pace of discovery is quickening every single day," DeWitt said, noting the ability to share knowledge, inspiration, and technology has completely changed the infectious disease game. "From our view, there's never been a better time for scientific discovery than right now."

The center hopes that by publishing these posters, they can highlight a few of the less flashy, cable-newsy diseases. But more than that, they hope these posters help people become inspired to join the fight, whether through science, the creative arts, or simply pushing the government for more scientific funding.

DeWitt also said they're hoping to publish another poster series soon. And I, for one, can't wait to see them.

From Your Site Articles
Related Articles Around the Web
Democracy