Red-carpet questions can be sexist. These 9 celebrity tweets fought back.

There are so many things #WorthSaying on the red carpet. 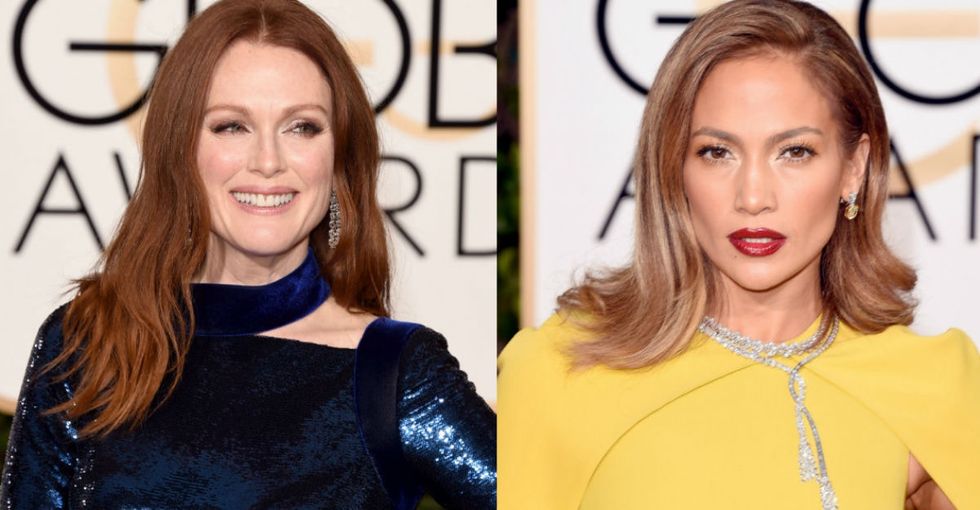 Red carpets aren't known for being on the front lines in the fight for gender equality ... to put it lightly.

The pre-show sexism that's persisted for decades can be subtle, but oh, is it there.

Famous women are relentlessly asked about the outfits they're wearing and the designers behind their looks — usually not in addition to, but instead of the accomplishments that got them there. Because who cares how many Oscars they've won or millions of box office dollars they've brought in when there's a dress to discuss, right?

Men, on the other hand, don't have to deal with the media's obsessive questioning over their award show appearances in the same way. Cate Blanchett pointed this out brilliantly at the 2014 Screen Actors Guild Awards when the camera began panning up her dress during an interview with E! News.

So on the 2016 Golden Globes' red carpet on Jan. 10, several stars decided to fight back.

Using the hashtag #WorthSaying — a campaign launched by L'Oreal — celebrities tweeted out what types of topics, messages, and questions (that don't have to do with what you look like) should be discussed during the event's red carpet.

2. Jennifer Lopez pointed out that no one should be silenced due to their gender.

3. Zoe Saldana encouraged girls to throw rulebooks out the window.

4. Génesis Rodríguez wanted you to know: Your success is in your hands.

5. Liya Kebede used the opportunity to support moms in the developing world.

6. Zendaya told us she's going to be a force for good.

7. Andie MacDowell gave a shout-out to the power of kindness and compassion.

8. Susan Sarandon thinks badass women in business deserve a round of applause.

9. Eva Longoria reminded us that our passions are best used when we share them.

The #WorthSaying hashtag isn't the first successful effort to confront casual sexism on the red carpet.

In recent years, more and more campaigns have challenged the award show status quo. Amy Poehler's Smart Girls, for instance, launched the #SmartGirlsAsk hashtag during the 2015 Emmys with a similar mission in mind.

And during last year's Academy Awards in February, Hollywood heavyweights like Reese Witherspoon, Shonda Rhimes, and Lena Dunham threw their support behind the #AskHerMore initiative, which came to be through The Representation Project.

"This is a movement to say we’re more than just our dresses," Witherspoon said of #AskHerMore, according to Variety. “There are 44 nominees this year that are women, and we are so happy to be here and talk about the work that we’ve done. It’s hard being a woman in Hollywood, or any industry.”

We're making strides on gender equality in Hollywood. It's time the red carpet starts reflecting that.

Women are killing it at the box office. Leading ladies are speaking out about getting paid the same as their male counterparts. And when it comes to award shows? Look no further than the 2016 Golden Globes: Women are finally getting recognized like they deserve. But it's time they get treated fairly before the shows start, too.