Old texts from a Parkland victim are going viral for a heartbreaking, yet inspiring, reason. 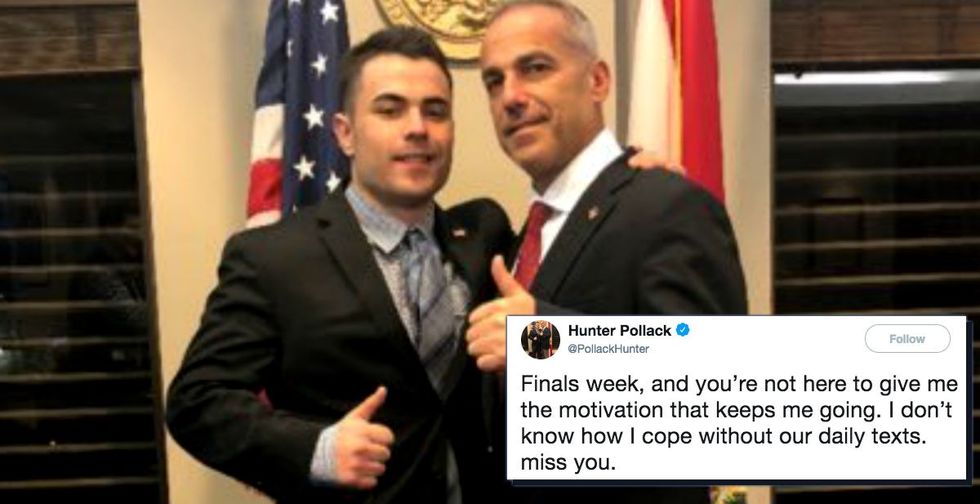 It's finals week and Hunter Pollack is missing his biggest ally: his sister.

High-school and college students know how stressful finals week can be, especially if you're cramming for tests that can have a lasting impact on your academic careers.

A few years ago, whenever Hunter found himself in these situations, he could always count on his sister, Meadow. Her encouragement, often in the form of inspirational text messages, helped him get through times of self-doubt and overwhelming stress.

But this week, Meadow isn't here to offer that encouragement. She was one of the 17 victims in the Marjory Stoneman Douglas High School shooting, an 18-year-old high school senior who was described as having "a smile like sunshine."

"Finals week, and you’re not here to give me the motivation that keeps me going. I don’t know how I cope without our daily texts. miss you."

Finals week, and you’re not here to give me the motivation that keeps me going. I don’t know how I cope without our… https://t.co/nOQZof7OgX
— Hunter Pollack (@Hunter Pollack)1524589287.0

Nothing could replace Meadow, of course, but an informal community of strangers online responded to Hunter's tweet in the most inspiring way.

The response was overwhelming, with strangers stepping in to offer support and encouragement.

Echoing the sentiments of Meadow, people began sharing acts of kindness in their response to Hunter's tweet:

"You've got a whole country rooting for you. I know it feels so painful sometimes and so completely empty at others, but you can get through this."

"You are so strong, Hunter. Push through in her honor — millions of people are supporting you from behind. You got this. "

"You're so strong bro. I'm in this with, as well as many others. Good luck on your finals, you got this. It's for Meadow. Make her proud."

We've learned so much from those affected by the Parkland shootings, including how to support them during their times of need.

The Parkland survivors have shown us so much already, offering courage and compassion in the face of criticism and doubts over their movement.

They've shown how our nation's youth can rally behind a cause and capture the hearts and minds of a nation.

But they're also human.

Hunter's tweet, and the response from people online, including many who probably disagree with his politics, shows the best in all of us.

We continue to be inspired by those affected by the Parkland shootings — but sometimes they need our support and inspiration just as much as we need it from them.