Meet Jordan, whose love of black cats helps her speak.

Black cats are definitely lucky for this girl. 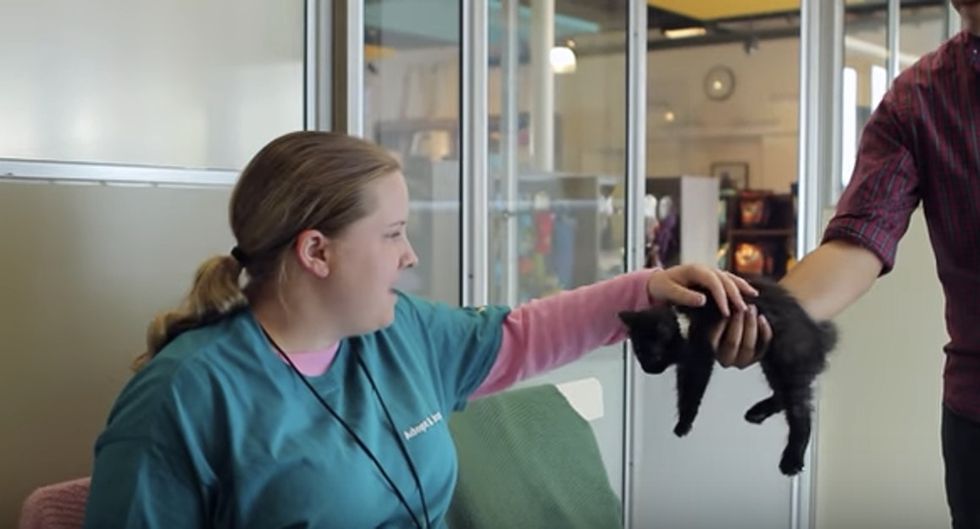 Superstition, according to most people, says black cats are unlucky. But Jordan is not most people.

Jordan is 22 years old and on the autism spectrum. It's rare for her to express herself through speech. Rare, that is, until she's face-to-face with a furry feline, especially if it's a black one.

Jordan meeting a black kitten. All images via PAWsitive/YouTube unless noted.

Jordan gets to be around fluffy black cats regularly thanks to Mychal's Learning Place, a nonprofit organization that helps give adults and children with learning disabilities the tools to build self-esteem and independence.

Through Mychal's Learning Place, Jordan has the opportunity to work with Adopt and Shop, a rescue organization and not-for-profit retail store that's never lacking in cats who need love and attention.

"[Jordan] gets to give love and affection the way she wants to. On her timeline," explained Ed Lynch, founder of Mychal's Learning Place.

In many ways, Jordan's relationship with the cats is incredibly reciprocal. Jordan provides the cats with mental and physical stimulation, and they do the same for her, which in turn helps her be more vocal and outgoing in the world.

Her bond with black cats in particular is special.

"We first discovered her love for cats when she began to draw pictures of black kittens," said Alicia Galindo, director of the Culver City branch of Mychal's Learning Place, explaining that Jordan called all the kittens "Gracie" after a black cat she had growing up who passed away.

After starting work at Adopt and Shop, Alicia said Jordan was noticeably happier. Caring for the shelter cats seemed to give her a greater sense of purpose.

Ed said that when Jordan does speak without a cat around, she usually just repeats the last thing someone else said to her. When she's with her favorite black cats, however, he said Jordan speaks much more freely, spouting off a lot of her own phrases.

"When Jordan is around cats, she just begins to talk to them as if they could understand her," said Alicia. "She always greets them and ask if they are OK."

A 2015 study conducted at the College of Veterinary Medicine at Purdue University found that animals can ease social anxiety in people on the autism spectrum.

A little girl nose-to-nose with her kitty. Photo by Patrick/Flickr..

The researchers studied the behavior of children with autism both with and without a guinea pig nearby and noticed the children were significantly less withdrawn in the presence of the animal.

Another study conducted at the University of Missouri College of Veterinary Medicine observed 70 families with children with autism, some who had pets and some who didn't. They found that the children of families with pets were much more socially outgoing and interested in bonding with their families than those without.

Because some children with autism don't like loud noises or sudden, large movements (aka dogs), the leader of the study, Gretchen Carlisle, recommends cats as the perfect companion.

Ed and the rest of the staff at Mychal's Learning Place are thrilled that Jordan has found somewhere she can be productive and feel fulfilled and loved all at the same time.

People with autism are often labeled as "different" by society, but they're just like anyone else trying to figure out what works for them and what doesn't. When you discover something that clicks for you, it can be like a light going on.

Looking at what black cats have done for Jordan (and she for them in return), you realize just how meaningless that making assumptions about individuals just because of a certain label truly is.

As Ed said, "Let’s take those labels, throw them out the door, and let them go."

Check out a video about Jordan and her cats here: