Katy Perry surprises a Pulse shooting survivor who was inspired by her music. 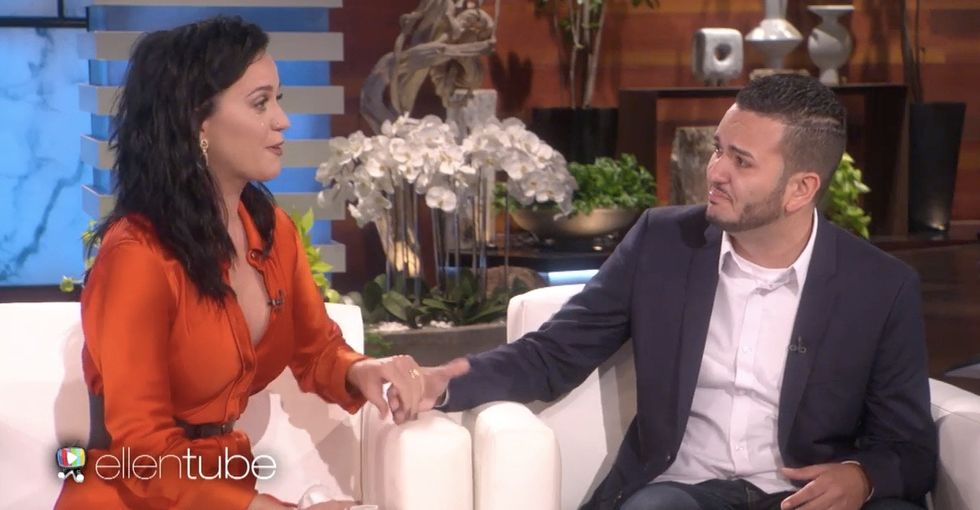 Recovering from a gunshot wound to the back, Tony found comfort in Katy Perry's music — specifically in her song "Rise."

Tony appeared on the Sept. 8 episode of "Ellen," recounting that night and discussing what life has been like in the post-Pulse world. At one point, he mentioned how helpful he found "Rise" in his recovery, telling Ellen DeGeneres that the song's powerful lyrics helped him stay focused, even joking that he played it so much that his boyfriend was surely sick of it.

"Have you met Katy?" asked Ellen. "No," Tony answered. "You want to meet Katy?" His eyed widened.

From backstage came Katy Perry herself. Smiling and waving, she approached Tony for a hug. Tears were shed. It was a beautiful moment.

It's easy to brush off things like music or TV or movies or art as being inconsequential or superficial. The truth is that these things are far more important to the world than we give them credit for.

During an interview while he was still in the hospital, Tony told NBC News some fairly gruesome details about that night at Pulse. In order to survive, the 32-year-old had to pretend he was dead, hiding his head under a couch.

That drive to live, to carry on, came from many places — music being one of them.

"Life isn't easy," Katy told him. "And you need little reliefs, through songs, quite possibly."

And she's absolutely right. The world can be a heavy place. While few of us will endure and overcome what Tony went through, we all have our own challenges in life, and it's important to find forms of self-care to help us through them.

In addition to some moving words, the Grammy-nominated singer had one more surprise for Tony: offering to pay for his first year of film school — something he'd wanted to do for some time — so that he, too, can help inspire others with his art.

Watch the entire moving exchange below, and be sure to have a tissue handy.

Imagine if you were driving around, saw the flashing lights of a cop car behind you, and didn't immediately think you were in trouble. What if your first thought was that someone was here to help instead of giving you a ticket.

Police in Denver, Colorado have a new program designed to improve public safety as well as the relationship between the police and those they serve and it's something everyone can get behind. Instead of issuing tickets, officers will now have the option to hand out $25 gift cards in situations where people are pulled over for minor "fix-it" violations.

Keep Reading Show less
justice
Get stories worth sharing delivered to your inbox
By signing up you agree to Upworthy's privacy policy.
Trending Stories
nature
Nature