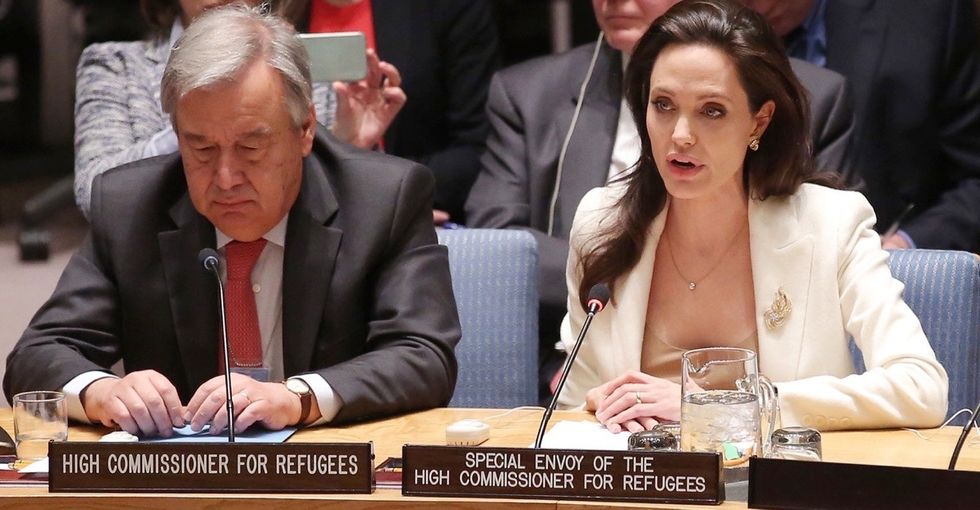 Though she may be best known as a movie star, Angelina Jolie Pitt has long been committed to humanitarian causes.

Jolie Pitt has served as special envoy of the United Nations high commissioner for refugees since 2012. Before that, she was a UNHCR goodwill ambassador. And over the past few days, she's flexed her humanitarian muscles in a big way, tackling topics like ISIS in Syria and the refugee crisis.

Angelina Jolie Pitt on June 20, 2015, after visiting a refugee camp in Turkey. Photo from AFP/Getty Images.

Jolie Pitt dropped some hard truths about the refugee crisis in a recent op-ed.

Writing for The Times along with co-author, former refugee, and member of the U.K. House of Lords Arminka Helic, Jolie Pitt called on countries to take in refugees fleeing warring countries like Syria. She also urged world leaders to work toward a diplomatic solution for the region.

"We should see this for what it is — part of a wider crisis in global governance. Over the past ten years the number of forcibly displaced people in the world has doubled to 60 million. It is unsustainable and beyond what international humanitarian organisations can manage.

"It is driven by a systemic failure to resolve conflicts. Nothing tells us more about the state of the world than the movement of people across borders. It is time to look for long-term solutions and to recognise that governments, not refugees, have to provide the answer."

Jolie Pitt also delivered a powerful speech accusing ISIS of using rape as a weapon to advance its agenda.

Speaking before a House of Lords committee, Jolie Pitt told the story of young girls sold into slavery for as little as $40 and repeatedly raped.

"I think the most important thing to understand is what it's not. It's not sexual, it is a violent, brutal terrorizing weapon," she said. "Unfortunately it is everywhere, in and out of conflict in every country basically. I can't think of one where there is not this issue."

She doubled down, adding that fighters are told: "'We ask you to rape.' They are saying, 'You should do this, this is the way to build a society.'"

Jolie Pitt reminds us that this crisis isn't something we can ignore any longer.

This is a global crisis that demands our attention, and her work shines a light on the true cost of global apathy. It's easy to remove yourself from a situation happening halfway across the world; it's harder to open your hearts to their pain.

Syrian children at a refugee camp. Photo by AFP/Getty Images.

How can you help? For starters, inform yourself about what's going on in Syria. Even better: Inform others, too.

"Knowledge is power" is a really cheesy saying, but it's true. Arm yourself with knowledge, and use it to help make a better world. Want to take action? Check out this list of five practical ways you can help.