A sister + a brother, raising their grandnephew: Meet an unconventional family that's thriving. 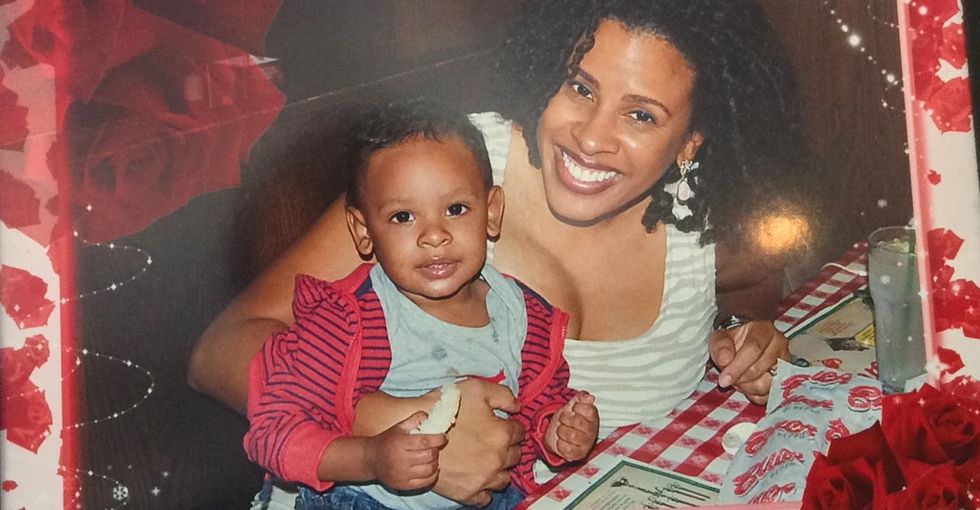 Sherri James was leading a busy and fulfilling life as the minister of a church when she found herself in a position to answer a second calling.

The 45-year-old self-proclaimed workaholic made the ultimate offer: to become a primary caregiver for her grandnephew, Jordan.

Sherri first met Jordan when he was 13 months old, after she returned to her home state to officiate her uncle's funeral. “I fell in love with [Jordan] immediately," she recalled. “I can remember holding him one night and praying over him."

Sherri and Jordan, enjoying dinner together.

Jordan's mother — Sherri's niece — had untreated mental health issues and was having a hard time caring for Jordan. One day, Sherri's mom called to vent some frustration over potentially needing to become Jordan's caregiver when Sherri said, “What if I take him?"

“The next thing I know, my niece is calling me to ask if Jordan can stay with me for one year while she gets help," Sherri recalled. Sherri agreed, and a short time later, she flew from California to Texas to pick up her 14-month-old grandnephew. Her niece came along to help get Jordan settled in, and then she returned to Texas.

But it soon became apparent that what started off as a short-term plan would need to become more permanent. “When it became obvious that my niece would not get treatment, I petitioned the courts for guardianship and received it," Sherri said. Now 20 months old, Jordan is doing well. But here's where the story gets interesting.

Relatives take in children all the time. But how many end up co-parenting with their sibling? That's right.

“I absolutely adore my brother," Sherri said of John. They were close as kids despite their eight-year age difference, and their bond extended into adulthood. John stayed with her during summer breaks while she was in college, and he eventually moved to L.A., where Sherri had moved eight years earlier. After living with her for five years, he moved out in 2008.

But when John decided to stay with Sherri again temporarily last fall, the timing was perfect. Temporary stretched into indefinite because Sherri found John's presence and assistance raising Jordan "essential." She said: "I can't imagine doing this without my brother's help."

Sherri, John, and Jordan are a reminder that families aren't just made up of a mom, a dad, and their biological children. That's not just OK. It's beautiful.

The reality of life is that when a parent finds himself or herself unable to raise their child, there just aren't that many options. Foster care is one, although it's less than ideal. Family care, where a relative steps in to raise the child, is another.

In fact, over 6 million kids are being raised by family members other than their birth parents. In communities all across the country, family members are stepping in and stepping up where they are needed to help care for the children who need it most. These relatives don't always get recognized and rewarded, but they put in the love and work — and millions of children are better for it.

While Sherri functions as the “primary" parent, John's help raising Jordan is invaluable.

When Sherri is unable to take care of Jordan, John steps in. “What's wonderful is how much Jordan loves him," Sherri said. “When he leaves the house, Jordan cries crocodile tears. My brother is truly his BFF. ... I've learned to respect their bond."

The Jameses may have an unconventional family situation, but it works — very well.

While her “new" life is filled with toys, play dates, and diapers, Sherri prefers it. “I feel like I have better balance now with Jordan," she explained. “Before he came, I was a workaholic. But his presence forces me to play outdoors at least once a day. Now, I try to squeeze all my work into the time that he's in day care. And, at 5:30 p.m. when I pick him up, it's party on!"

At the same time, Sherri is very mindful of her niece, the woman whose baby she is raising. “She's not a bad person. She has a mental illness and it negatively impacted how she cared for Jordan," Sherri explained.

“It was not an easy decision to step in and take this baby. The fact that he is thriving now — meaning gained weight, got back on track developmentally — is our consolation that we made the right choice. But it's still hard emotionally."

The popular parenting adage “It takes a village to raise a child" came to mind when Sherri told me about her community's support.

Sherri with her mom and her "spiritual mom," Della Reese.

“I am so grateful for the way my church family has stepped up to help me," she said. One member watches Jordan during services so Sherri can serve as minister. Others have generously given clothing, toys, education resources, and welcome parenting advice.

“I really, really appreciate the way my church family has embraced Jordan and is helping me look after him. They are an enormous blessing."

Sherri may not have intended to become a parent at the exact time it happened or in the way it occurred, but she has a lot in common with most parents.

Like all moms and women raising kids, she wants one thing: what's best for Jordan.

Acknowledging that she and her brother haven't had a discussion yet about their “parenting philosophy," Sherri shared: “Who I am as a parent is still emerging. My primary goal is to protect Jordan's image of himself. I want him to understand himself as a limitless spiritual being and that he can be, do, and have whatever he wants in life."

That probably sounds pretty familiar to those of us who are parents!

And like most parents, she's figuring this parenting gig out as she goes. “I don't consciously know how to teach him that," she added. “So, I pray for guidance each night for the wisdom and humility to do what is best for him."

An image from Jeff Bridges' personal note on his website

Way to bury the lead, Jeff! Yesterday's news of Jeff Bridges' cancer remission revealed the beloved Hollywood icon also faced COVID 19, which had him hospitalized for over a month. This put many things on hold, including filming for his new FX thriller series Old Man.

Taking on chemotherapy is no easy task. Pile that onto losing smell, restricted breathing, and medical isolation, and anyone would want to throw in the towel. But for the ever optimistic Bridges, dealing with two health crises simultaneously became a beautiful life lesson, which he shared in a handwritten letter found on his website.